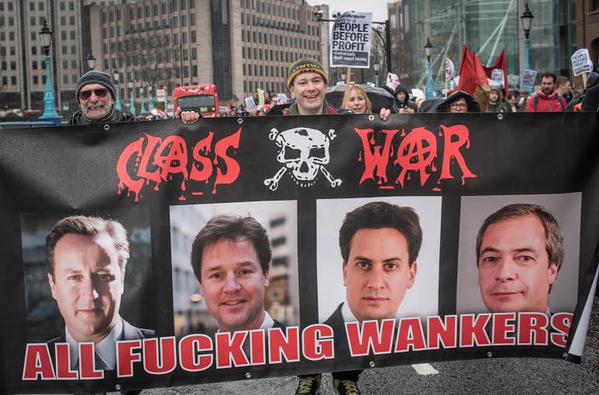 A student arrested for “threatening and abusive behaviour” for holding a banner at a protest, has had the charges against him dropped.

The banner, which showed pictures of Cameron, Clegg, Miliband, and Farage, with the slogan “All Fucking Wankers” underneath was deemed by the police to be an offence under Section 5 of the Public Order Act 1986. However, last week, the Crown Prosecution Service (CPS) informed the student, Adam Carr, that they would no longer be pursing the case due to lack of evidence.

Carr was arrested at a demonstration against “poor doors” in April last year. There have been weekly protests against One Commercial Street, a luxury apartment block in London, after it was discovered that the social housing tenants there were being forced to use a separate entrance located in an alleyway.

Police warned Carr that the banner was offensive, but he didn’t believe he was committing an offence, so refused to put it away. He subsequently refused to accept a £90 penalty charge notice, and insisted on being taken to court.

I didn’t believe it was illegal. I was making a political point. It may have been crude, but it was also meant to be humorous. It was about not respecting people in authority just because they get elected in a bent and corrupt system.

His solicitor, Simon Natas from ITN Solicitors, claimed the decision was a victory for freedom of speech:

Freedom of speech is the lifeblood of democracy and is protected by the law, even when some might find the language used offensive. My client should not have been arrested for exercising his right to free speech and he should certainly never have been prosecuted.

The banner, however, wasn’t as lucky and was accidentally destroyed by the police.

So, can we now legally swear at politicians?

Unfortunately, the jury is literally still out on this one. Whilst the dropping of this case is a great victory for free speech, the law is still ambiguous and liable to interpretation by both the police and the courts.

In 2013, Bethan Tichborne was found guilty of using threatening words and behaviour after she shouted at Cameron that he had “blood on his hands” whilst he was switching on the Christmas lights in Oxford. On conviction, District Judge, Tim Pattison said her words could “hardly be more insulting to anyone, whether a politician or not”.

Tichborne appealed the verdict, but it was upheld, and she incurred more costs.

Since then, the word “insulting” has been removed from the offence. However, whether this makes much material difference to whether someone is convicted is unknown, given Director of Public Prosecutions, Keir Starmer stated that:

We are unable to identify a case in which the alleged behaviour leading to conviction could not properly be characterised as ‘abusive’ as well as ‘insulting’.

There is, therefore, a potential distinction between swearing about politicians and directly confronting them about the myriad of awful things they have done, but this is conjecture rather than a legal opinion.

However, these victories are important. There has been a barrage of recent attacks on freedom of speech, and it’s heartening to see cases like this one where these fundamental rights are upheld. Furthermore, they show how important it is to keep challenging these cases. Carr could easily have given in, both when threatened with arrest, and when offered the penalty charge notice. Instead, he chose to fight and was vindicated – and this should encourage all of us to carry on resisting these cases.

Join the regular protests against the poor doors.

Subscribe to the Network for Police Monitoring’s email list to stay up-to-date with the latest policing news and what you can do.