David Cameron and Iain Duncan Smith unleash Tory propaganda, against each other (IMAGE, TWEETS) - The Canary 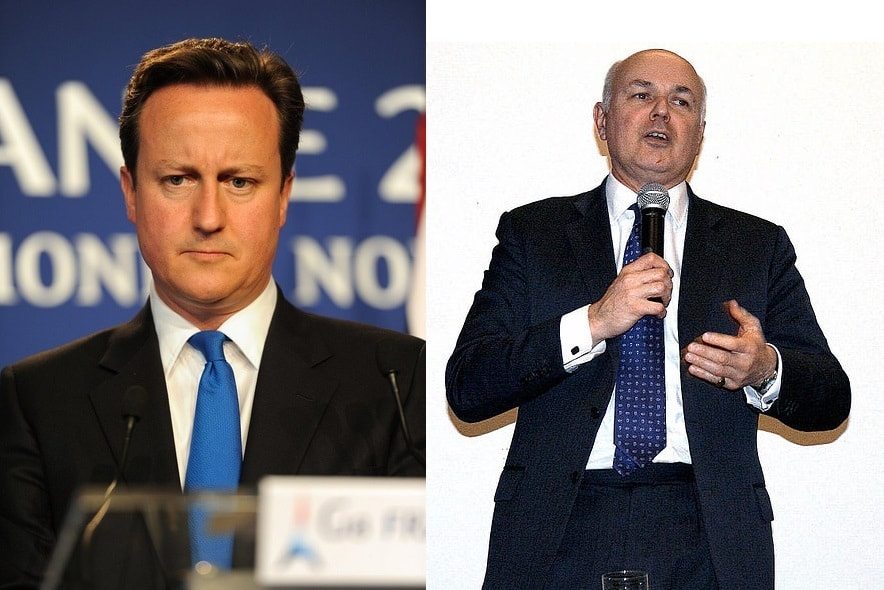 David Cameron and Iain Duncan Smith have unleashed Tory propaganda upon each other over the battle for Brexit. Both the Tory leadership heavyweights have said that their personal referendum preference will be instrumental in saving the British people from terrorism.

The Conservative party in disarray is like a dark, ironic comedy. It seems the Tory propaganda machine is unleashing fearmongering tactics upon itself, tearing the inner wiring out for the public to see. Both leaving and remaining in the EU will lead to an increased terror risk, according to the Tory leadership. Meanwhile, the real risk of a domestic terrorist attack on a British family is, in fact, incredibly low.

The following is a chart produced by The Canary, showing the real risk of dying from a terrorist attack in the UK. It was inspired by this chart The Intercept produced for the US.

The death caused by Muslim extremism within the chart was the murder of Lee Rigby in May 2013. However, Seamus Milne – now Corbyn’s strategist – said that this “was not terrorism in the normal sense”, because the killers specifically targeted a soldier who served in Afghanistan. It is important to realise the link; this was not an indiscriminate attack.

As we can see from the chart, one is way more likely to meet their end being struck by lightning than in a terrorist attack here in Britain. There are 2 deaths from lightning every year, 5 deaths from car accidents every day, and 110 deaths from air pollution every day. This is compared to 1 death from Muslim extremism since 2010, which is mirrored by 1 Muslim death at the hand of white supremacists since 2010.

The greatest obstacle to anti-Muslim fearmongering and bigotry: reality.

When considering what both the media and the Conservatives are focusing on in the EU debate, the most salient aspect of the chart becomes the number of deaths from greenhouse gases. What is absent from the debate is the environmental protection provided by the EU, and the consideration of what protective measures we would have if we left. As the chart shows, this is a much more serious threat to national security than Islamist boogeymen.

Indeed, the Tories want to secretively abolish environmental protections. We know this because of their avid support of the ‘free-trade’ deal TTIP, which would weaken EU environmental legislation because it would lower ours to US standards.

However, it is a mistake to think that leaving the EU will circumvent TTIP. In fact, it would probably only make it easier for Cameron and Obama to draw up a US-UK version, despite what Obama says.

Cameron’s claim is that leaving the EU would mean member states will withhold information from us, therefore leaving us vulnerable to attacks from terrorists which are mutual adversaries. This seems like a convenient, and unsubstantiated, assumption. Indeed, the ‘leave’ camp in Cameron’s own party have said they are “sad and disappointed” with Cameron’s tactics. They accuse the ‘in’ camp of launching “project fear”.

Meanwhile, they seem to have no problem launching it themselves. IDS said:

We’ve seen what happened in Paris where they spent ages planning and plotting so who’s to say it’s not beyond the wit of man that those might already be thinking about that.

What he is implying is that because some people were murdered in France, British families are at a high risk of being murdered, too. And that leaving the EU would reduce that risk. This runs contrary to what we have seen from the statistics: the terror risk is monumentally low. But, instead of informing the public and taking a rational lead, a divided Conservative party is choosing to ignite prejudices to reach contradictory outcomes: both leaving the EU and remaining will endanger the British people.

On Sunday, on the BBC’s Marr show, IDS accused Cameron of betraying a “low opinion of the British people” through his ‘in’ arguments. IDS let the public know how he prioritises his passions:

My big passion is welfare reform. But Europe goes over everything.

We can presume that the two are linked. EU employment rights are at risk if we were to vote for Brexit. Leaving the EU would enable IDS to cripple the working class even further.

Considering ‘welfare reform’ is Tory language for cuts, we have now heard it from the horses mouth: transferring wealth from the already poor to the already rich is IDS’ passion. At the hand of IDS we have seen disabled people stripped of their Independent Living Fund (ILF), nearly 14,000 lose their mobility cars, free school meal vouchers scrapped for some primary school children, a 30% cut to Employment and Support allowance (ESA), and the introduction of the work capability assessment (WCA) – linked to 279,000 cases of mental illness.

Ostensibly the motive is to save the taxpayer money but, staggeringly, benefit cuts have saved no net amount of money at all. What they have done is make rich people more money. The net wealth of Britain’s richest 1,000 families has more than doubled since the financial crisis.

People reacted to the Marr interview on Twitter, with some highlighting how the EU debate is consuming public discourse:

Yeah, let's talk about the #EUreferendum with Iain Duncan-Smith, #marr.
Nothing else going on… pic.twitter.com/WxWV93xnA2

Some questioned his credibility as a voice on the subject:

Iain Duncan Smith, who lives rent free in his father-in-law's mansion, maybe not an expert on the vulnerability of citizens

We are witnessing Cameron and IDS twisting the knife into each other, as they instrumentalise the same fear tactics to achieve opposite results. Both leaving and remaining in the EU will apparently increase the monumentally low risk of one dying in a terrorist attack, in Britain. Cameron and IDS stand together in the spotlight, but in total contradiction to each other, leaving the Tory propaganda machine of fear naked for all to see.

–Write to your MP, asking if they support TTIP.