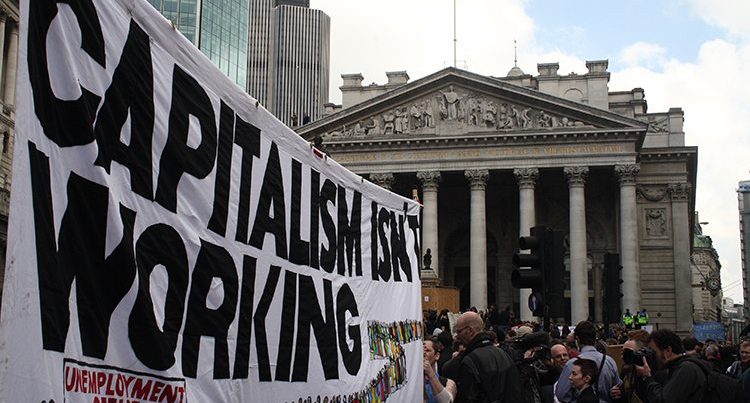 Former Bank of England governor Mervyn King, who was the head of the UK central bank in the run up to and during the 2008 crash, has written a book in which he states that he is ‘certain’ another financial crash is coming, and soon, due to regulators’ failure to reform the financial system.

Extracts from the book in the Telegraph show King outlining his insights into what the world’s real financial problems are, and admits that crucial misunderstandings and a failure of the ideas that underpin capitalist economies caused the crash. He goes on to say that if the system is not reformed, which he does not consider it to have been since the current crisis began, another will greet us “sooner rather than later”.

A warning such as this from someone of his particular experience and stature is sure to make an impression. Yet, though King might sound progressive in his statement he makes it very much in line with the status quo, and from a particularly privileged position within it. He is proclaiming, from the boardroom, the changes that need to be made in the ivory tower of economic thought; he makes no reference to the actual changes that would immediately and directly benefit the majority of those living on the ground.

King speaks primarily about the disequilibrium (in spending, trade surpluses/deficits/ interest rates etc.) both within and between countries, but offers no recognition of the culture of elitism, corruption and inequity that the pre-crash capitalist system thrived on. He shows no sign of understanding that economics needs reform because of its impact on the majority’s lived experience, or the destruction that it causes.

Since this side of the system was part of the cause of the crash and, as King states, that system has not changed, it is frustrating to read his warning while it lacks any discussion of the unjust, not to mention criminal, exploitative, and deadly elements of the financial system that remain. As pointed out in the blurb for John Kay’s Other People’s Money (our recommended book below) global finance is:

an industry that mostly trades with itself, talks to itself, and judges itself by reference to standards which it has itself generated.

It is interesting too that King says Britain and the US have done a lot to improve their economic resilience, and that the crash may be more likely to happen in China, for example. King reveals that he got his inspiration from a discussion with a senior Chinese central banker, who told him:

We in China have learnt a great deal from the West about how competition and a market economy support industrialisation and create higher living standards. […] But I don’t think you’ve quite got the hang of money and banking yet.

The extent of King’s understanding of people’s need for reform remains unclear. But we can agree on one thing:

To restore faith in capitalism will require bold action – to raise productivity, rebalance our economies, and reform our system of money and banking.

Though, perhaps we have different economic and moral principles in mind.

-Support the Canary so we can keep providing context for breaking news.