French authorities bulldoze 'the jungle', but others are offering a humanitarian response - Canary 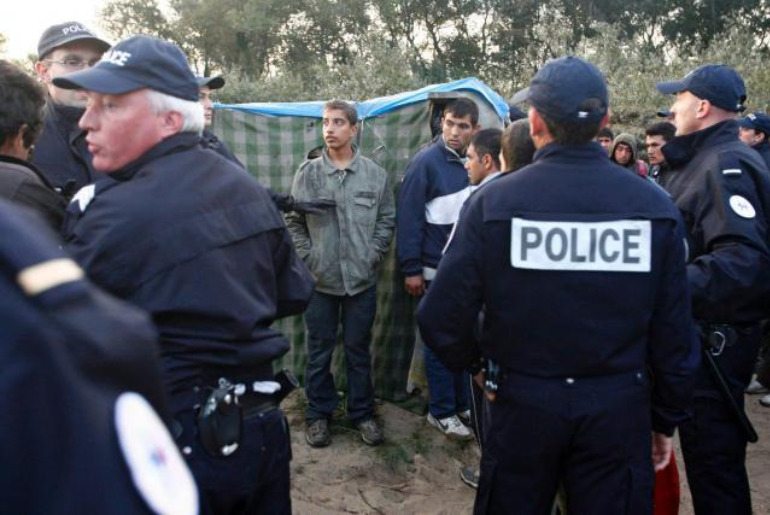 French riot police have begun their destruction of the ‘jungle’ refugee camp in Calais. Whilst the authorities have taken a heavy-handed approach to the removal of refugees, to relieve congestion in the vital port, there are others offering a genuinely humanitarian approach.

The camp, which has earned the unfavorable title of the ‘jungle’ in recent years due to its poor living conditions, has grown vastly in the last few years. As a result of this growth, what was a relatively controllable situation for French police has developed into more disruptive conditions as refugees have blocked routes into the port during many attempts to gain access to the UK.

The move by French authorities will no doubt improve traffic flow around the vital port, and put less strain on the European haulage industry which has suffered heavily during the current crisis. It is also likely to please many lorry drivers who make up the front line of such businesses. Whilst their suffering is not comparable to that of those living in squalid conditions in the camps, drivers have also been directly affected by the crisis. With loss of earnings, additional journey time and stress, and the potential for huge fines if migrants are found on board, lorry drivers have been fully entitled to raise their concerns.

Although the French approach may be pragmatic in economic terms, and echoes the pro-business sentiments of both British and French counterparts in their communications on the issue, it is extremely unlikely to offer any long-term solution to the crisis. The inhumane approach to what is a humanitarian disaster is also a worrying sign of the times.

That riot police, armed with tear gas and rubber bullets, are celebrated – in some quarters – for clearing camps occupied by those fleeing some of the worst crises of the 21st century is troubling, to say the least. Whilst it is unclear where authorities expect the inhabitants of the camps to go, there are at least some who are offering a truly humanitarian contingency.

It is believed that the expected exodus may lead many to flee further towards Dunkirk and France’s “forgotten” refugee scandal. Here, in a town named Grande-Synthe, thousands of refugees – including over 250 children – sleep in mud-soaked, rat-infested conditions. The conditions, widely acknowledged to be worse than those of the ’jungle’, were described by one Doctors Without Borders (MSF) official as:

The worst I’ve seen in 20 years of humanitarian work.

The local authorities of Dunkirk however, have taken a decidedly different approach to their counterparts in Calais. Under the directorship of the regions Green Mayor, Damien Carême, and in collaboration with MSF, construction of a ‘humanitarian standard’ shelter is well underway. Due for completion in early March, it’s opening will coincide with the likely exodus from Calais.

As the ‘jungle’ is callously bulldozed and burnt, the construction in Dunkirk will provide the first purpose-built ‘humanitarian standard’ camp in France during the current crisis. This means that refugees, many of whom are lone children, will finally be provided shelter that meets the UN’s basic humanitarian standards. The camp will provide heated shelter, drinking water, kitchens, showers and sanitation to those who have been without the basics for too long.

Whilst the Tory government continues to spout anti-immigration rhetoric, and the right-wing press denounces the refugees as ‘economic migrants’ or ‘scroungers’, the overriding priority of the central French authorities seems to be mere containment. It has once again fallen to voluntary, charitable and localised causes to offer a hand of human kindness. They demonstrate the overwhelming ability of the good hearted.

If only our government could take heed of such good will and implement policy on the basis of human need and dignity, not reductive economic rhetoric.

Donate to Doctors Without Borders or Refugee Action

Get in touch with you MP and urge them to do more.