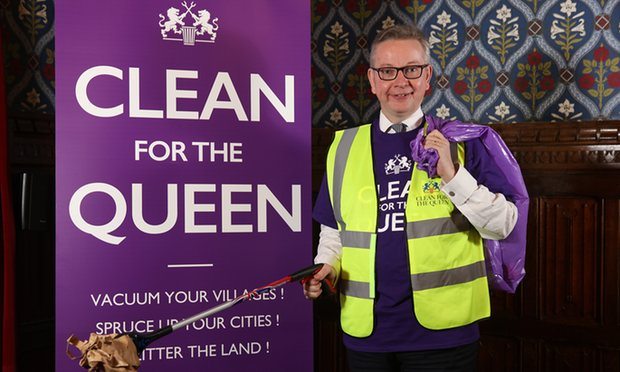 Boris Johnson and Michael Gove have been blasted on social media after backing an anti-litter campaign asking Brits to clean up the streets for free in time for the Queen’s 90th birthday.

The Tory cabinet ministers were last week revealed as the poster boys for the ‘Clean for the Queen’ initiative which aims to encourage more than a million people to tidy up Britain as a gift to the multi-millionaire monarch ahead of her 90th birthday.

To promote the movement, the Euro-skeptic pair were pictured wearing ‘Clean for the Queen’ purple T-shirts and high-visibility jackets while they posed with bin bags and litter pickers they used to clutch brown paper ‘litter props’.

Set up last September to mark Her Majesty becoming Britain’s longest-serving monarch, the campaign is urging millions of Brits to take part in its 50,000 ‘litter action’ events across its ‘big clean-up weekend’ on 4-6 March.

But despite the Tories’ enthusiasm, critics took to Twitter using the #CleanForTheQueen hashtag to slam the unpaid voluntary scheme, saying it belittles litter pickers as ‘subservient plebs’ and ‘minions’.

Hey, peasants … why not do for free what councils used to pay people to do before the cuts? Love, the Government. #CleanForTheQueen

Twitter user Rachael wrote: “The Tories are STILL trying to get #CleanForTheQueen trending – gets rightfully ridiculed.”

While John Edwards Tweeted: “#CleanForTheQueen is a joke. If councils were not being hit with 60%+ cuts, our streets would be clean enough for Michael Gove to eat off.

WPMcCarthy wrote: “Can we use this hashtag to purge politics of grime, corruption and elitism? #CleanForTheQueen.”

Aaron Bastani added: “The people that *actually* #CleanForTheQueen are in in-work poverty.”

There is a housing crisis, education crisis, wage crisis & refugee crisis but this Tory gov't only supports #CleanForTheQueen

Poverty, homelessness, food banks, cuts, an NHS in ruins. And the people are supposed to clean for the Queen?! Get a grip! #CleanForTheQueen

The campaign comes after staff working at the Queen’s lavish Winsor Castle threatened to strike over ‘appalling’ low pay.

It was reported that the people who actually ‘Clean for the Queen’ are paid below the living wage and start on as little as £14,400 per year.

Meanwhile, the royal family costs the UK taxpayer approximately £35.7 million a year, or 56p per person, the latest reports show.

To be sure, keeping Britain tidy is a noble cause, but being ordered to take to the streets at the behest of two pompous rent-a-gun Tories is as insulting as it is patronising.

Featured image via Twitter/Clean For The Queen