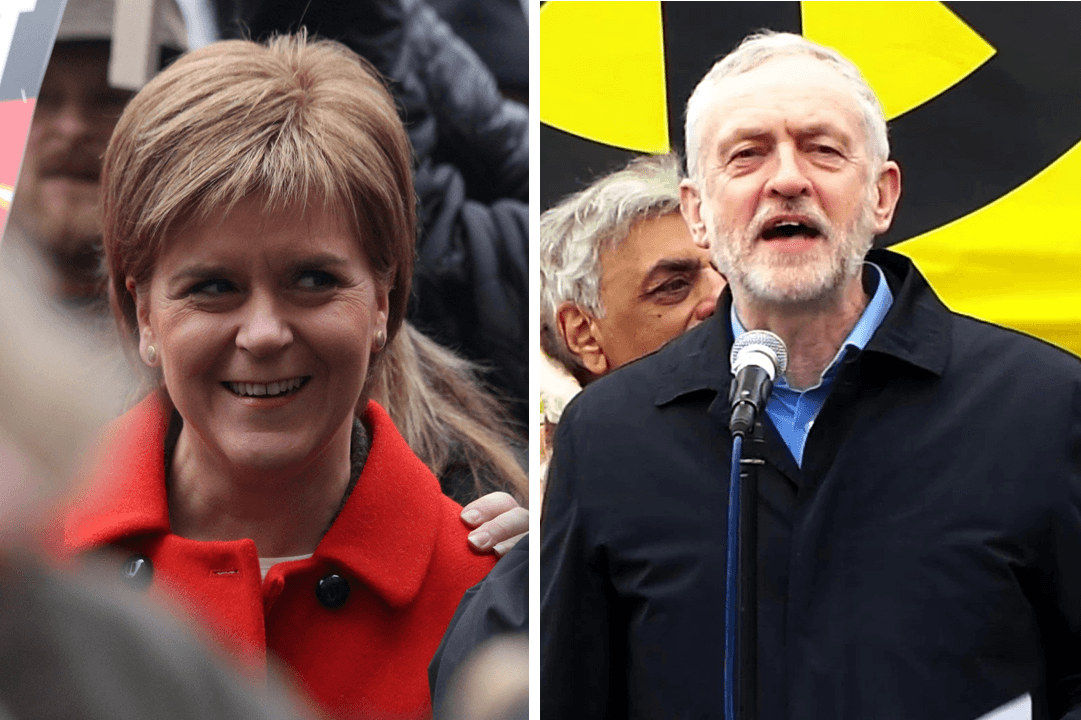 Jeremy Corbyn and Nicola Sturgeon’s passionate speeches to the CND anti-Trident march in London showed that they are politicians of conviction and consistency. Some of the opportunistic careerists in Westminster should watch and learn.

On a chilly February day in London’s Trafalgar Square, a crowd tens of thousands strong kept warm by applauding a succession of powerful speeches opposing renewal of the UK’s Trident nuclear missile system. Two of the most rapturously received speakers were Nicola Sturgeon, leader of the Scottish National Party (SNP) and First Minister of Scotland, and Jeremy Corbyn, the leader of the Labour party.

Both of them became members of the Campaign for Nuclear Disarmament (CND) in their mid-teens. For Corbyn, this was in the 60s, for Sturgeon the 80s. Opposing nuclear weapons has been as central to their lives as their party political careers. Their position has been consistent and unwavering and the words they spoke from the plinth of Nelson’s Column carried the weight of conviction and the authority of long-term campaigning.

Politicians who can convince us that they believe what they’re saying seem to be a dying breed. Research by YouGov suggests that people increasingly regard politicians as being interested only in themselves. Only 10% now think that their elected representatives have the country’s best interests at heart, while 48% feel that self-interest is the dominant motivation. This disaffection with politicians, which is especially marked among older voters, is compounded by a stark lack of interest among many younger people, who simply find the whole business of politics irrelevant.

The election of Jeremy Corbyn to the Labour leadership has been characterised by a surge in predominantly younger members. The dramatic sweep across almost every Scottish constituency by Nicola Sturgeon’s SNP owed much to the support of younger voters. The CND march was an intriguing mix of young and old as toddlers, young adults and pensioners alike heard from students and junior doctors as well as veteran campaigners such as Tariq Ali and Bruce Kent. There was a sense that, far from being some kind of Cold War throwback, the anti-nuclear movement now looks like the forward-thinking, realistic camp. It is those who insist we can’t be a proper Top Nation without having the ability to destroy the world who now seem to be in thrall to the ghosts of the past.

So Sturgeon and Corbyn were able to make thoroughly reasonable and persuasive arguments, while holding the course they’ve followed all their adult lives. By comparison, the likes of David Cameron, George Osborne and Boris Johnson look utterly rudderless, chopping, changing, spinning and flailing in a constant scramble to appear in the best possible light at any given moment. We now have the prospect of an EU referendum debate, followed at some stage by a Tory leadership contest, both likely to be tainted by the most naked opportunism. The hunger for proper, principled, sensible politics is only going to grow.

Support the Electoral Reform Society which seeks to improve the UK’s politics.

Support The Canary as it cuts through the spin to find the real story.