Cameron desperately repeats himself over and over, as Corbyn's questions bite deep at PMQs - Canary 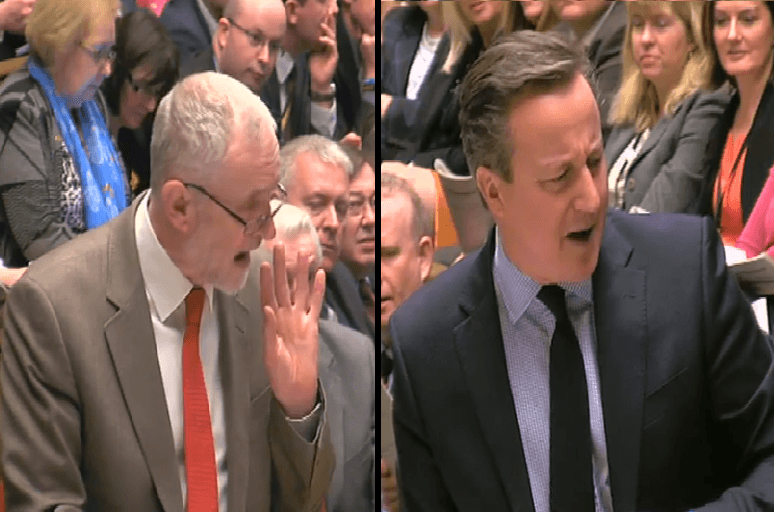 David Cameron was left desperately repeating himself over and over at Prime Minister’s Questions (PMQs) on Wednesday. 4 out of the 6 questions Jeremy Corbyn asked left him mindlessly replaying his favourite buzzwords: our so-called “strong economy”.

It is a strong indication that Cameron does not have faith in his own answers if he needs to repeat irrelevant generalities each time Corbyn questions him.

Corbyn began with the question:

It’s been three years since the government announced a policy of tax free childcare. Could the Prime Minister tell us what the hold up is?

Cameron failed to say what the hold up is, instead senselessly barking what the government policies are:

Well we’re introducing the tax-free childcare, along with the 30 hours of childcare for everyone with 3 and 4 year olds.

It cannot take that long to remove taxes from a payment, yet the policy will not come in until 2017. Meanwhile, MPs have already managed to enjoy a 10% pay increase, which was announced at the end of the same year as tax-free childcare.

Corbyn then challenged Cameron on the 30 hours of childcare:

Could the Prime Minister tell us why the 30 hours of childcare for three and four-year-olds is not there for one-third of parents?

Yet again, Cameron failed to answer the question:

Realising he had failed, Cameron then resorted to launching the first in a series of mindless reaffirmations of his “strong economy”:

These are all the things you can do if you have a strong economy, you’re getting your deficit down, your economies growing.

Corbyn then spoke of how austerity is undermining the government’s own policies:

The National Audit Office recently confirmed that one-third of families promised 30 hours free childcare now won’t receive it. This is a broken promise. The NAO report also warns many childcare provides are not offering the new entitlement due to insufficient funding. There are 41,000 3 year-olds missing out on free early education as a result of this. Will the Prime Minister intervene and ensure those children get the start in life they deserve?

The Prime Minister again failed to address the huge funding hole in his 30 hours free childcare policy, instead championing what the NAO said about the 15 hour policy as it currently stands. This is sidestepping a genuine question about a government pledge. To cover it up, Cameron then went off on his buzzword drivel for the second time:

All of these things we’re able to do because we’ve got a strong and sound economy. What a contrast it would be if we were to listen to the honourable gentleman.

Unabashed, Corbyn then moved on to focus on the repercussions on early education:

Firstly, naked numbers like ‘13,000 more teachers’ mean nothing without the surrounding context. An increase in teachers entirely depends on the increase in pupils. As The Guardian reports, there has been “a surge in demand for places”, and 240,000 new primary schools places were required in just the year 2014/15. Secondly, is Cameron even specifically referring to primary school teachers, pupils and schools? Or is he speaking generally, in the hope we think he is?

Cameron then attempted to deny his own Department of Education’s figures. Scrambling to make up for another lacklustre response, he resorted to buzzword rhetoric for the third time:

All because we’ve got a strong economy, and the right values in place.

Later, Corbyn challenged Cameron on the huge increase of agency staff in our education:

The Prime Minister seems to be in denial here. Ofsted and NAO all confirm there is a shortage and a crisis of teachers. When 70% of headteachers warn they are now having to use agency staff, to staff their classrooms, isn’t it time the government intervened, and looked at the real cost of this? Which is of course damage to children’s education, but also the £1.3bn spent last year on agency teachers. We had this with healthcare, and now education. Aren’t we moving into an era that we can term ‘agency Britain’?

Cameron first responded by misrepresenting the question, in an attempt to smear Corbyn, saying:

Well I think he should look at the facts instead of trying to talk down people who are working so hard to teach children in our schools.

He then refused to address the question of agency staff, choosing instead to talk of how educated the teachers are and how “rigorous” the classrooms are. After yet another failed answer, he desperately repeated his buzzwords, for the fourth time:

But all of that is only possible, if you have a strong and growing economy to fund those schools that the children need!

Do we even have a strong economy?

Seeing as the Prime Minister repeats his ‘strong economy’ mantra every single week at PMQs, one would think it’d be a statement of fact. But, as it turns out, it’s the Tories we really can’t trust with the economy.

The Tories pride themselves on their deficit reduction. Yet, not only are they failing to get the deficit down, Osborne has in fact piled on more debt than every post-war Labour government combined.

Meanwhile, the data shows that the more austere a country is, the worse it grows. And it could be argued we’ve had the slowest recovery from a recession since records began. Without the Tories rampant austerity policies, we’d be growing much faster than we are now.

Accordingly, this lack of growth meant the Tories embarrassingly lost our AAA credit rating in 2013. This is the first time this has happened since we were first rated in 1979.

Not only is Cameron evading questions when he ramps up the rhetoric, he is also repeating a statement that is rubbished by the facts. From the perspective of debt, growth, credit ratings and recovery, the Tories are failing the British people.

At PMQs this week, Corbyn’s questions left Cameron bamboozled. He sounded like an old record stuck on loop, repeating the dubious buzzwords that we have “a strong economy” over and over again. This kind of behaviour hands Corbyn victory. Unless Cameron starts engaging with the questions at hand, he will continue to crash and burn week upon week at PMQs.

-Keep writing to your MP to express any discontent.

-If that’s not enough, you can pledge to take direct action.

-Support The Canary so we can keep holding the government to account.