Cameron just made a prize tit of himself at PMQs (VIDEO, TWEETS) - The Canary 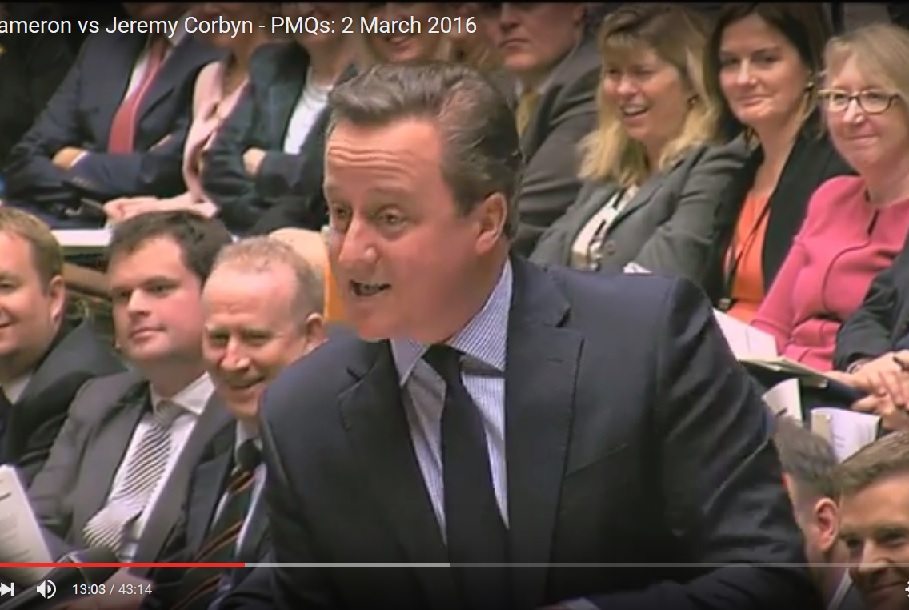 At Prime Minister’s Questions (PMQs) on 2 March, David Cameron fell to an embarrassing low with yet another in a long line of cringeworthy puns. And he was soon torn apart on Twitter.

The Prime Minister tried to set up his ‘joke’ (the term is used loosely) by referring to the new links between Jeremy Corbyn’s Labour party and former Greek Finance Minister, Yanis Varoufakis. Trying his best as always, Cameron sought to undermine Corbyn’s economic stance by linking it to the crisis in Greece. He accused Varoufakis of leaving the Greek economy “in ruins”, saying:

That is Labour’s policy in two words: Acropolis Now.

While this atrocious gag drew laughs from fellow Tories, the argument behind it was just as weak as the joke itself.

Greece had already been in trouble for years when Varoufakis came to his role, and he was only in the position for just over five months. Not really enough time to destroy an economy, you might think.

Even right-wing organisations like Bloomberg and the Adam Smith Institute have called Varoufakis “brilliant” while enthusiastically supporting his policies. In fact, the only real failure for Varoufakis was his unsuccessful attempt to renegotiate Greece’s debt with its international lenders and curtail the austerity measures which were hitting the Greek people so hard. And considering the overwhelming power of the Troika (the European Commission, the European Central Bank and the International Monetary Fund), this was always going to be a very difficult undertaking.

By targeting Varoufakis, then, it seems Cameron was just poking around hopelessly in his search for a new way to attack Corbyn.

Responses on Twitter to Cameron’s new pun ranged from painful embarrassment to criticism of Cameron’s irrelevant comments and increasing immaturity:

If I had said that Acropolis Now 'joke' at PMQs I would have killed myself. Right there at the despatch box.

Bad joke made worse by the effort needed to make it relevant to the subject! #AcropolisNow #DavidCameron https://t.co/vnvuhEjqdE

'Acropolis now'? I'd be a bit wary of making puns on a film about a megalomaniac slowly going mad by a river surrounded by lackeys #pmqs

A pattern of pathetic puns

Although Tory MPs seem to crack up whenever their leader attempts to be funny, the Prime Minister is definitely no comedian. But for some reason, he thinks he is.

In November 2015, Cameron said that if Jeremy Corbyn was trying to “move the Labour party to the left”, he’d give him “full Marx“. Business Insider called this “the worst pun” of the day.

The Prime Minister didn’t take the hint. In January, he once again turned PMQs into a farce by making some utterly embarrassing Shakespeare puns in an attempt to criticise Corbyn’s cabinet reshuffle. The process, he claimed, had looked as if it would “go into its Twelfth Night”, and that it had turned out to be “Much Ado About Nothing”.

This is not helping Cameron’s reputation in the general public. One person on Twitter, who admitted to not even watching PMQs, seemed to know exactly what it’s all about at the moment:

Citizens are not amused

It’s now becoming increasingly clear that British citizens are tired of Cameron’s schoolboy tactics at PMQs. Thousands of people, for instance, have already signed a petition to the Speaker of the House of Commons asking him to discourage David Cameron from:

Laughably embarrassing puns also betray the seriousness of what parliament should be all about. So however much we may love to see Cameron humiliate himself with cheap soundbites worthy of a third-rate comedian, we must keep emphasising that this is not what PMQs is for.

–Support the Canary, so we can continue to be a viable alternative to the establishment media.

–Write to your MP to see if they think it’s appropriate for the Prime Minister to use PMQs to hurl insults and bad jokes around parliament.