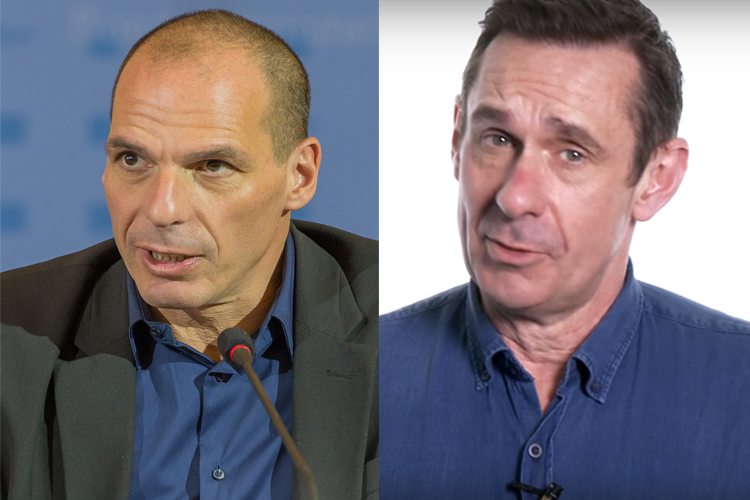 Yanis Varoufakis, the former Greek Finance Minister whose anti-austerity stance caused the European banks much consternation during the eurozone crisis, has become an adviser to the Labour leadership. In the same week, Paul Mason has quit his job as Economics Editor at Channel 4, announcing that he will join Shadow Chancellor John Mcdonnell in the New Economics series of lectures and debates.

Varoufakis’s involvement was revealed when Corbyn gave an interview with the Islington Tribune, his local constituency paper. He said that the economics professor turned anti-austerity icon would advise his team in “some capacity”. Varoufakis will also be speaking in the New Economics events.

It didn’t take long for commentators to ‘spot the difference’ between the economic advice Corbyn may get from Varoufakis and the kind that Cameron receives from George Osborne:

Corbyn gets advice from PhD economist, Varoufakis, while Cameron gets economic advice from BA educated Historian.https://t.co/RoEokFRvn8

The Tories have been quick to ridicule the move, but there may be more than a little defensive posturing in this. Varoufakis is an articulate outsider with a passionate following, whose fiery critique of austerity is second to none.

Since Corbyn was elected as Labour leader in September 2015, Varoufakis has been warning that his opponents will use “fear as their main instrument”, and that they will use the ugly spectre of a bankrupted Greece as an example of what happens when a country resists the international financial system.

Chief Secretary to the Treasury, Greg Hands, seems to be living up to expectations, saying:

Corbyn says he can learn from Varoufakis’s ‘experience in Europe’ but that experience was one of deep recession, capital flight, banks being forced to close for days on end and a government that struggled to pay public sector workers their wages and pensions.

Greece has indeed been to hell and is not on its way back anytime soon. But Hands is conflating the issue by implying that Varoufakis and Syriza are somehow responsible for the economic crisis and austerity measures they set out to oppose, which cannot be the case. What Varoufarkis actually has, is experience of what happens when a country decides to stand up to big financial institutions – something likely to be of value to Corbyn in the future.

Paired with Varoufakis, the “unapologetic Marxist”,  is Paul Mason, once referred to as a “worthy successor to Marx”. He was business correspondent for the BBC’s Newsnight from 2001 until 2013 when he joined Channel 4, where he would go on to become Economics Editor. Mason has now gone freelance, saying that after 15 years he felt constrained by the rules governing mainstream broadcasting.

Paul is a unique talent, a renaissance man with a knowledge and interest in so many different areas and with an originality and take which lends itself to almost every form of journalism and media.

In light of this endorsement, Mason’s willingness to work with Corbyn’s anti-austerity team is certainly a boon. He not only provides a general critique of austerity and the current financial climate, but also a compelling vision for the future emerging from modern trends. In an article-cum-manifesto called The End Of Capitalism Has Begun, he says:

Capitalism, it turns out, will not be abolished by forced-march techniques. It will be abolished by creating something more dynamic that exists, at first, almost unseen within the old system, but which will break through, reshaping the economy around new values and behaviours. I call this postcapitalism.

Yanis Varoufakis and Paul Mason are just the latest in a long line of figureheads and experts to show support for, and willingness to work with, the Corbyn campaign. The Labour leader has officially received backing from 40 anti-austerity economists, including the former adviser to the Bank of England. These are certainly not wide-eyed idealists. They are well-respected experts in their field whose knowledge is relied on to make policy. And they share a common belief – that the current economic system is simply not working.

–Participate in the New Economics series of lectures and debates.

–Take to the streets with The People’s Assembly Against Austerity.

–Write to your MP demanding a reversal to austerity.