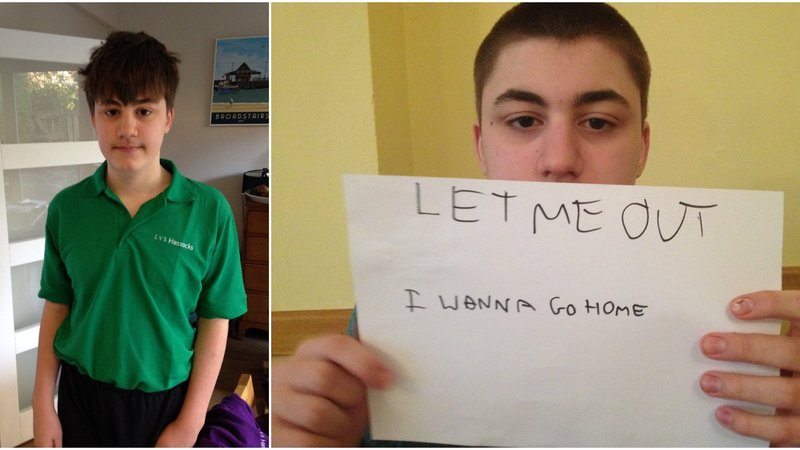 A 15-year old boy with autism and learning difficulties has spent the last six months trapped in a psychiatric unit because there are no beds available at any specialist autistic unit that could take care of him.

Matthew Garnett’s parents Isabelle and Robin say he’s being kept “like a prisoner” since he was sectioned under the Mental Health Act and placed in a psychiatric intensive care unit. Units like this are is meant to provide emergency short-term care and treatment for those suffering from acute mental illnesses. Usually, patients are moved back home or onto a hospital to receive specialist care. However, Matthew has been locked in the ward since September 2015 – away from his family and rapidly deteriorating within a unit that is ill-equipped to meet his complex needs.

The psychiatric unit in Surrey is not run by the NHS, but by private contractor Cygnet Health. Cygnet has access to special services for autistic adults in Harrow  but is still unable to get Matthew the right support at the unit or to help him to receive care at home.  Situations like these fly in the face of the promises the Government made back in October 2015 when England’s only remaining specialist learning disability hospital was shut down as a response to the Winterbourne View abuse scandal. The Tories claimed they were changing the system so that care recipients could “live in homes, not hospitals.”

This is why we need equality for mental health patients

The petition may now also raise a bigger question about the lack of specialist provision for people with autism and other mental health issues. Back in November 2015, in time for the Autumn Statement, Lib Dem MP Norman Lamb campaigned for ‘parity of esteem’ to redress the differences in how Tory health policies treat mental and physical health. The campaign, called Equality4MentalHealth demanded the same quality of care and access to funds should be available for both types of health service. However, cases like this illustrate that equality is still a long way away. As seen on the petition web page, Isabelle said:

If our son had a severe physical illness, and was detained in a random A&E department miles away from his home for six months, refused assessment, treatment and care, it would be seen as totally unacceptable, an outrage, a scandal. Yet, because our son has autism and mental health problems, the issue has been swept under the carpet.

Professor Tanya Byron, a consultant in child and adolescent health also signed and made a  statement on the petition, saying

It is a breach of human rights. We wouldn’t treat children and Young people with physical illnesses this way so why those who have mental health difficulties? This must change.

Public figures on Twitter have also come out in support:

Meeting Matthew Garnett's parents, bravely speaking out on behalf of him & many other children with mental illness pic.twitter.com/7A6grDqzuE

Please support this petition and everyone campaigning to get the very best and most appropriate care for their… https://t.co/sHa2Hp0kNE

What’s more, since starting the ‘Make Room for Matthew’ campaign to get their son home, the Garnetts have discovered they are not the only family facing the effects of discriminatory mental health policies; distraught parents have been contacting them with similar stories.

Sign the petition and make a donation to the campaign. Our aim is simple: to get Conservative Minister of State at the Department of Health Alistair Burt to Make Room for Matthew.