Yanis Varoufakis: the 'rock star of politics' who took on the EU (TWEETS, VIDEO) - The Canary 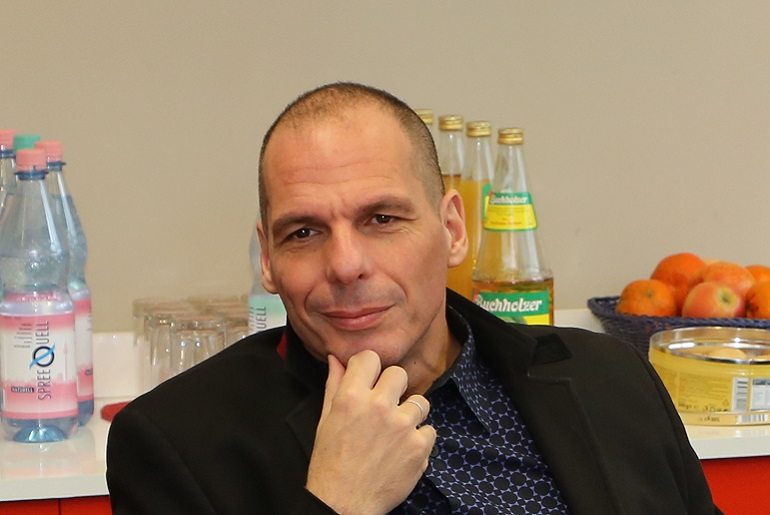 Yanis Varoufakis is hated by financial enforcers from the EC, the ECB and the IMF (the Troika) but admired by many people in Greece and respected by his peers. The 54-year-old professor’s background is academia, but his election as Greek Finance Minister put him on the international stage. Opinions of him vary, but he is undoubtedly worth listening to.

Varoufakis has recently founded a political party. The Democracy in Europe Movement 2025 (DiEM25) is calling for the EU to change. “A common bureaucracy and a common currency” run behind closed doors must become something far more democratic, transparent and socially responsible. According to the DiEM25 manifesto, the choice is between “authentic democracy and insidious disintegration”. And Varoufakis has warned that the price of failure is a European, and global, humanitarian crisis. He also characterises the future as a choice between a Star Trek utopia and a dystopian world like The Matrix, saying, “We are closer to the Matrix than Star Trek”.

Varoufakis on EU institutions: "There is contempt for democracy in those centres" Watch: https://t.co/VLzALLV63G https://t.co/2LbvEkAvkq

Unlike some of austerity’s main proponents, Varoufakis is an economist. It was his first choice as a degree subject, before he switched to mathematics (Essex), followed by a master’s in mathematical statistics (Birmingham), then back to economics, and Essex, for his PhD.

Varoufakis seems to thrive on media attention, and his motorbike, blend of pop culture and complex economic analysis, and his leather jacket, mean that he has more public appeal than his peers. The ‘coolest finance minister ever’ was a hit with the audience when he appeared on Question Time in September 2015. He has a huge online following – 710,000 on Twitter (tags include #MinisterofAwesome), and nearly 18,000 subscribe to his blog. He has been called the ‘rock star‘ of politics, and enjoys the limelight – though a photo shoot at his home for Paris Match provoked a backlash and he regretted it.

A politician speaks out on a politician: " I have never met anyone so concerned about his public image as him" – de Guindos on Yanis

Yanis Varoufakis turned up to 10 Downing Street in a leather jacket and no tie in 2015. In most of the photos, Osborne stands one step above Varoufakis, trying to look taller.  The left-wing press got all ooh-err about the jacket. Childish wardrobe jibes are not the only thing Varoufakis has in common with UK Labour leader Jeremy Corbyn. Varoufakis is an ardent opponent of austerity, which he likened to:

…trying to extract milk from a sick cow by whipping it

The former Greek Finance Minister stood up to the Troika at the height of the Greek crisis, disputing the ‘fix’ of unsustainable loans, and the conditions of austerity and privatisation that came with them. He argued that loan repayment would increase the burden on an already suffering people and do nothing to repair the Greek or European economies. Meetings with the Troika were often stormy, and one participant from a meeting in Riga called him a ‘timewaster, an amateur, and a gambler‘. Varoufakis said:

I shall wear the creditors’ loathing with pride.

Since Varoufakis is also a game theorist, his tactics during the negotiations have been analysed with this in mind – his behaviour has been framed as an elaborate performance. Ultimately though, he lost the showdown and had to resign. As banks closed their doors many were angry with his “come and get it” attitude to the threat of loan foreclosure. While he still has some popular support in Greece, he has also been attacked by protesters.

Varoufakis is described as a narcissist in several quarters and was criticised for not having made the necessary preparations for a potential Grexit. However, in this call with Norman Lamont, recorded via the exclusive Official Monetary and Financial Institutions Forum and leaked to Ekathimerini,  Varoufakis says, controversially, that he did have a plan B for Grexit, and that he and a colleague were prepared to hack tax records in order to create a parallel monetary system. He talks ‘off the record’, swearing he’ll deny everything. But there is also an edge of self-justification. Once the claims were investigated, no evidence of tampering was found and charges were dropped.

The discussion did expose how deeply European financial institutions reach into the technological heart of sovereign treasuries. Exactly the murky inner workings that he seeks to shed more light on with DiEM25. Anyone preparing to go head to head with the Troika is right to want him on their team. Paul Mason had stated that Varoufakis would be advising labour – but, as the Spectator reported, Varoufakis used an interview with CNBC, and an article, to explain that this was not an official post.

I’m a full time active politician. As such, I could not be advising another politician.

He did clarify that they had talked:

I am talking to Jeremy Corbyn because he talks to me, I talk to Norman Lamont from the Conservatives, to Caroline Lucas from the Green Party.

Yaroufakis does not hold back from disparaging his peers and was publicly critical of Irish Minister for Finance, Michael Noonan for accepting the Troika’s loan conditions. Noonan defended himself on the grounds that he wasn’t willing to create a “black hole” in budgets across the EU, and retaliated, saying that Varoufakis was “making excuses” for his own failure.

When George Osborne mocked Varoufakis in the Commons, Cameron followed up by saying the former Greek Finance Minister of leaving the Greek economy ‘in ruins”, calling it “Acropolis Now”. Varoufakis quickly turned the joke back on them, using a letter to the Economist to call it a “cheap shot“, and showing how Osborne had scored an own goal for Brexit. He further explained:

My failure as finance minister was due to the ironclad determination of an authoritarian EU to continue with its failed Greek economic program.

Like other academics who have entered the political sphere, Varoufakis crashed into the real world. His 9-year timeline for the creation of a restructured and more democratic Europe seems optimistic. One hurdle could be that many citizens won’t vote for a more powerful European parliament.

But Yanis Varoufakis is not just an academic who found his ivory tower too cramped. He has studied, lived and worked as a university professor and government advisor all over the world (Greece, the UK, Australia and the USA). His capacity to interrogate data and search for causes means that, whether or not one agrees with his conclusions, understanding them is worth the effort.

Personality issues aside, Varoufakis is embracing the complexity of the situation and has the charisma to have got this far. With DiEM25, he has succeeded in changing the conversation.

DiEM25 have kindly produced a short version of their manifesto.

EurActiv.com provides detailed reports on what is happening in different sectors at a European level.

The People’s Assembly Against Austerity has a search function that makes finding local groups easy.

Support The Canary, so we can go on telling it like it is.