Jeremy Hunt asked why junior doctors have low morale. This is their response. (TWEETS) - Canary 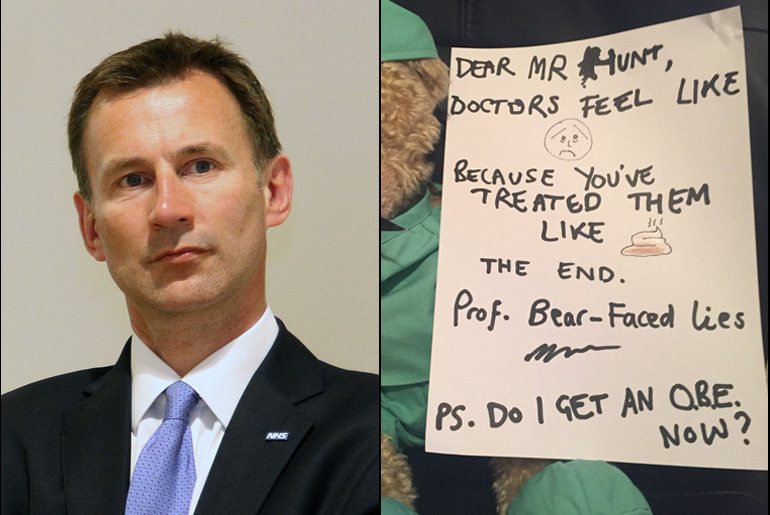 On the same day Jeremy Hunt said he was going to impose his contract on England’s junior doctors, he also announced an inquiry into their morale. Now it turns out that inquiry will ignore doctors’ pay and conditions, so doctors are boycotting it.

Instead, they are speaking out in the media, and this is what they’re telling us.

The NHS is in the middle of both a staffing crisis and a financial crisis. Across the country, tens of thousands of doctor and nursing posts remain vacant. Hospitals find themselves unable to fill their rotas, meaning that remaining doctors and nurses have to work extra shifts to cover the gaps. While thousands leave the profession – or the country – many of those who remain are depressed, exhausted and burnt out.

This is the context in which the Health Secretary unilaterally imposed a contract on junior doctors and launched an urgent inquiry into their morale.

The response to Hunt’s morale review was instantly scathing:

And in the three weeks since the inquiry was launched, doctors have continued to lambast it:

BREAKING: enquiry into #juniordoctors morale delivered to @Jeremy_Hunt and DoH.
With thanks to Prof. Bear-FacedLies pic.twitter.com/gSXFGiL9Tj

Recently, it became clear that pay and conditions would be excluded from Hunt’s inquiry:

Doctors are saying their primary reason for boycotting is that the inquiry “risks producing a report with significant bias”.

Well done to the ATDG for doing this right thing. Completely support their decision. #juniorcontract https://t.co/S8wKFr7h20

Instead, they have turned to the media and social media to explain the conditions they’re working in and the implications for patient care, and it’s not pretty. Hospitals across the country are facing “rota gaps” as they find themselves unable to recruit enough staff:

More than two-thirds of the UK’s trusts and health boards are now trying to recruit staff from abroad to fill the gap, and NHS England is increasingly relying on agency staff, compounding its financial crisis. In the meantime, existing staff have to work extra shifts and longer hours to keep the NHS ticking over:

We’re seeing 17, 18% more attendances now than we did last year and the year before. This is impacting massively. We’ve got rota gaps throughout the country … Doctors and nurses are getting burnt out. They’re voting with their feet. This has been demonstrated by the fact that [among] junior doctors going forward from foundation years, which is the first two years after qualification, 50% are choosing not to go into specialist training at the moment and are either going abroad, to Australia, or are choosing to leave medicine altogether.

Our doctors are shouting from the rooftops that they are at breaking point, and that patient care is suffering as a result. They deserve support. Instead, the government has lied to them, smeared them, then tried to impose a contract that will make their conditions worse – driving yet more doctors from the NHS and compounding the staffing crisis.

Sign the official petition asking Jeremy Hunt to resume meaningful negotiations with the British Medical Association.
Ask your MP to support the NHS Reinstatement Bill.
Ask Jeremy Hunt on Twitter to scrap the new junior doctors’ contract.
Follow the #mindtherotagap hashtag on Twitter to keep informed.
Support The Canary so we can keep holding the government to account.