If you hadn’t noticed, the USA’s anti-establishment candidate is absolutely smashing it (VIDEO, TWEETS) - The Canary 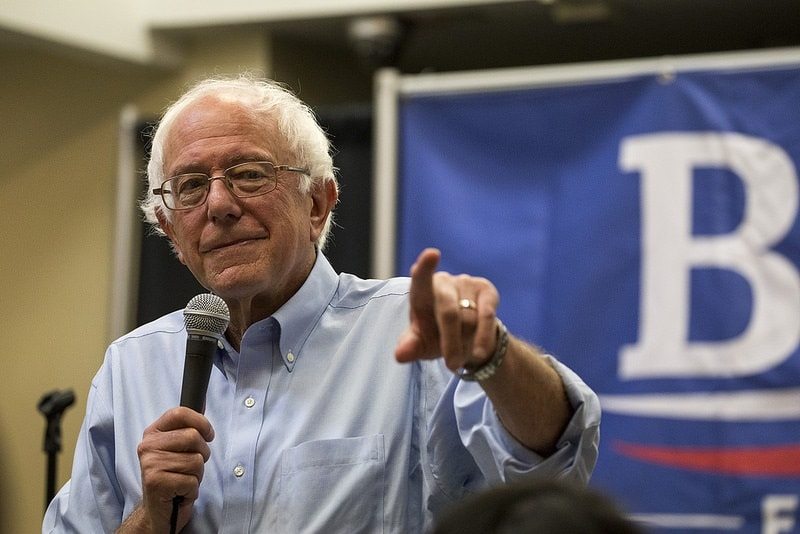 Despite the entire US establishment being stacked against him, Bernie Sanders overwhelmingly beat democratic rival Hillary Clinton in three out of four states this weekend. Sanders won the Maine Democratic caucuses on Sunday, after two other landslide victories in Nebraska and Kansas on Saturday.

In the US, caucuses are when registered members of a political party meet to vote for their preferred candidate. In this case, to nominate the Democratic candidate to enter the presidential race later this year.

This weekend alone we won in Maine, Kansas and Nebraska. The pundits might not like it but the people are making history.

The most significant aspect of these victories is not the fact that they were won by a landslide (the latest Maine victory saw the Vermont senator win around 64.3% of the vote) but the record voter turnout across the states. The Kansas victory smashed the state’s previous voter turnout record in 2008 by a whopping 10%. There wasn’t even enough room for Bernie supporters:

While Nebraska had a higher turnout than expected, the Maine victory was also record-breaking. Reportedly, some caucus locations in Maine had such an astounding turnout that they were forced to skip the talking and get straight to the voting. In Maine, the lines stretched further than the cameras could see:

Record-breaking voter turnout is the most salient aspect, because it proves that people will go out and vote when they are given something to vote for. And Sanders has inspired such an unprecedented voter turnout because he has not diluted his anti-establishment policies for the sake of wooing establishment-supporting voters.

Lessons from across the pond

It’s very appropriate to compare Sanders’ victories this weekend and the plight of Jeremy Corbyn here in the UK. The common media conception is that Corbyn is ‘unelectable’, mainly because the British public are thought to have shown their approval of the economic orthodoxy by giving the Conservatives a majority in the 2015 elections. And that suggests a rejection of what Corbyn represents. Or so the mainstream media tells us.

Well the truth is that only 24% of the country actually voted Conservative. And as we have seen with Sanders, the path to victory lies in galvanising non-voters. It does not lie in attempting the difficult task of winning over Tories, which would only result in Corbyn losing his core support.

Another similarity is that the campaigns of these anti-establishment underdogs are authenticated by their lifelong dedication to social justice. Sanders, for example, was at Martin Luther King Jr’s famous “I have a dream” speech in 1963. And Corbyn was arrested for protesting against apartheid in South Africa back in 1984.

So what makes Sanders qualify as the ‘anti-establishment’ candidate when compared with Clinton? The following chart breaks it down:

Here's the chart I shared in my endorsement of Bernie. (Note: Hillary changed on TPP since this chart was published) pic.twitter.com/VZmhUBNXpv

This chart shows that, while the rhetoric may change, Clinton’s views are much more in line with those of the Republicans she is supposed to be opposing than with those held by Sanders. Sanders, on the other hand, actually opposes key establishment policies: banking deregulation, climate inaction, destabilising wars and mass surveillance, to name just a few.

Some people try to conflate Sanders with Donald Trump, suggesting they are both anti-establishment candidates. Fox News anchor Bill O’Reily has argued that they are “really the same guy, they just change their facial expressions”. This is entirely inaccurate. When Trump is coherent, his antidote to the establishment is simply more of the very same free-market fundamentalism that already flourishes in the USA. This is the equivalent of cleaning your friend’s car by covering it in sewage.

Trump harbours much of the same core views as Clinton and the Republican party. He is included in the Republican section of the chart above, because he just takes establishment-approved issues to their logical extremes. For example, the general anti-immigrant scapegoating in the US extends to Trump’s policy to ban all Muslims from the country.

Sanders had a brilliant weekend. But it takes 2,383 delegates to win the Democratic nomination. So far, Sanders has only 499 delegates compared to Clinton’s 1,130. This includes superdelegates, which were actually introduced to mediate against democracy. As U.S. Uncut writes, they were put in place to “stop grassroots populist candidates” winning over “establishment-approved party insiders”. Fundamentally, superdelegates do not represent Democratic voters, as this tweet from a superdelegate proves:

@D_Born @BernieSanders Super delegates don't "represent people" I'm not elected by anyone. I'll do what I think is right for the country

With phenomena like superdelegates and a hostile press, the cards are stacked against Sanders. But he is making huge gains, while inspiring both grassroots campaigns like #Bernieorbust and record-breaking voter turnouts. Much like Corbyn, who has galvanised mass grassroots movements here in the UK.

If people are given something to vote for, they will shift the global political paradigm forever. Even if these progressive, anti-establishment candidates do not win in the end.