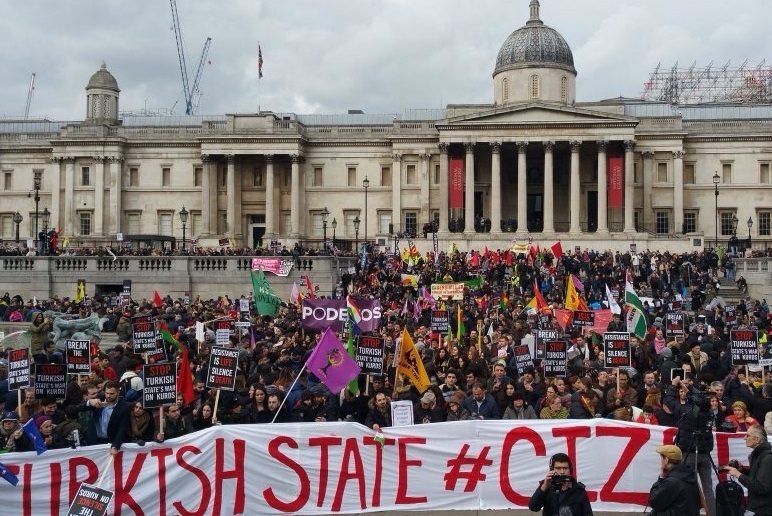 On 6 March, over 10,000 people hit the streets of central London to join the first national demonstration in the UK organised by the activist group Stop War on Kurds. But although protesters gathered at the BBC’s headquarters, the public service broadcaster was suspiciously silent about the march.

The protest was organised to condemn the Turkish state’s military assault on Kurdish communities in both Turkey and Syria in recent months. The Canary spoke to civilians affected by the war in late February, looking in particular at the actions of Turkish authorities in the town of Cizre. Since that article, the assault on this town has eased. But the aftermath has revealed scenes reminiscent of the Bosnian genocide in the 1990s.

Turkey is a rogue state, fast slipping into fascism…By attacking the Kurdish resistance, the Turkish state is aiding ISIS

But one of the only media outlets to cover the march was RT:

The western media has been relatively silent about Turkey’s war crimes, even though Turkey is a member of NATO. The Guardian is just one of the media outlets which has failed to challenge the lies coming from Ankara effectively. In particular, it has casually glossed over the fact that Turkish President Recep Tayyip Erdoğan has been the main culprit behind the conflict currently raging in Turkey. Erdoğan’s hunger for political power was the one of the main causes behind the breakdown of peace negotiations with the left-wing Kurdistan Workers’ Party (PKK) in July 2015.

Between August 2015 and 21 January this year, 198 civilians (including 39 children) were allegedly killed by Turkey’s offensive on Kurdish communities. Since then, dozens more have been killed both in Cizre and elsewhere in Turkey by state forces.

And now, the BBC has managed to remain silent about the demonstration on 6 March even though it started outside BBC HQ. To make matters worse, no word seemed to come from outlets like the Guardian or the Independent, either. Apparently, a massive human rights march aimed at stopping genocidal war crimes is not that newsworthy.

So why all of the silence in the west over Turkey’s actions? One Twitter user hit the nail on the head:

Turkey is bombing its civilians & raiding press offices. If it wasn't a US ally, we'd be hearing about the "brutal Erdogan regime" right now

Kurdish rights activist Memed Aksoy warns that if Turkey’s offensive on Kurdish communities is not brought to an end soon, the situation in the region could soon spiral out of control.  He says:

We couldn’t prevent civil war in Syria; let’s prevent it in Turkey

As one banner at the march read “resistance is life, silence is death”. And resistance indeed seems to be the only way Kurds in Turkey can avoid death today, unless of course they flee from their own communities.

For those outside Turkey, the best way to save Kurdish lives is to break the silence that the mainstream media has helped to foster. This is why Stop War on Kurds has promised that, until Turkish authorities stop attacking Kurdish communities, there will be “many more” marches in the coming months.

-Write to David Cameron and your MP to ask them to push the Turkish regime to stop its war on Kurdish communities.

-Join at least 400,000 Brits who have cancelled holidays in Turkey, and support the boycott campaign here.

-Only by accepting the PKK as a legitimate representative of Kurds in Turkey will peace negotiations be possible. Ask the British government to change its currently hostile stance towards the PKK by signing this petition.