Tory MPs derail a bill to save the NHS, and this boy's future - The Canary 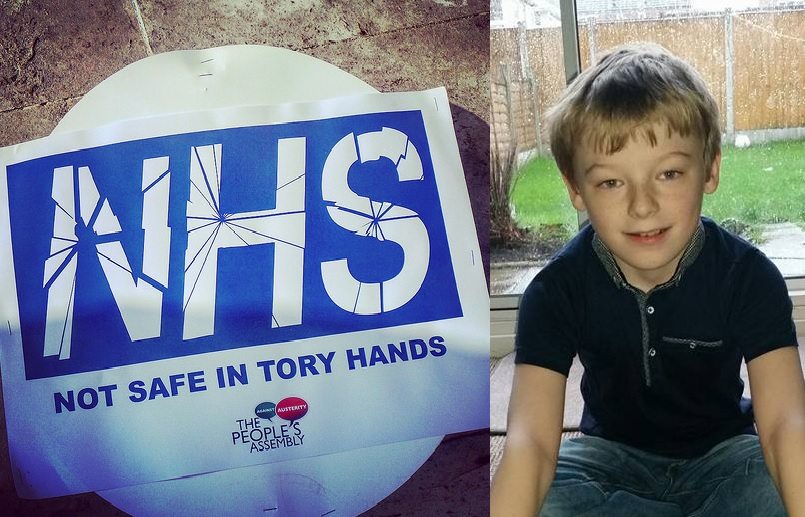 On 11 March, a debate on the NHS Reinstatement Bill was thwarted by four Tory MPs. The bill seeks to “fully restore the NHS as an accountable public service” by reversing the fragmentation and privatisation introduced over the last 25 years. In short, the bill would save the NHS, and the health of many in our nation with it. But the vile Tory quartet did not sing its praises; they abused their parliamentary privileges to derail it instead.

The NHS Reinstatement Bill debate followed one on another bill, dubbed the “Send Them All Back Bill“. This bill is designed to return anyone living in the UK, but not born here, back to their country of origin if they commit a crime. A blogger called the Secret Barrister wrote about it, saying:

It is, without a doubt, one of the stupidest, crassest legislative proposals I’ve ever seen. Its draftsmanship appears to be the work of a particularly poorly-educated dormouse typing in elasticated mittens.

According to The Mirror, this ‘stupid’ bill is only two pages long, but the four Tory MPs spoke about it for three and a half hours in parliament. Philip Hollobone spoke for one hour and 22 minutes. Philip Davies spoke for 51 minutes. Sir Edward Leigh for 36 minutes. And David Nuttall for 40 minutes. They spoke for so long that the Green’s Caroline Lucas had only 17 minutes to speak on the NHS Reinstatement Bill. Parliamentary rules state that any bill being discussed at 2.30pm on Friday must be shelved. So, as Lucas was only given time to speak at 2.13pm, the NHS bill was sidelined.

This is no accident, as Caroline Lucas noted:

Filibustering is the practice of deliberately talking for too long in a particular debate, in order to limit the time given to others. And when this is done in concert, as it was by these four MPs, it can completely anihilate the chance for a bill to be discussed in any meaningful manner. It has been used before by the Tories to block votes on life-saving education in schools, free hospital parking for carers, and legislation to outlaw ‘revenge evictions’ by rogue landlords.

Filibustering is a complete affront to democracy, whenever it happens. But this episode is particularly jarring for the Conservative party, because it happened just days after an 11 year old boy wrote to David Cameron pleading for NHS funding for his medical treatment.

Ben Baddeley, from Staffordshire, has cerebral palsy. He was due to have spinal surgery on the NHS, to help alleviate his pain and increase his mobility. But a few days before the operation his family were told that £11,440 of the cost could not be covered by the NHS. The family set up an appeal, and managed to raise the funds through private donations. The family then received further bad news:

After Ben had his operation we were then informed because we had paid into the NHS it was now classed as private and Ben would not be entitled to rehabilitation.

Because Ben’s rehabilitation is no longer covered due to the private donations, his family are having to raise around £2,000 a month to cover the costs. This is taking a toll on the family, as Ben expressed in his letter to the Prime Minister:

We are always busy fundraising so we miss out on family time quite a lot and that’s a bit sad for us.

The young boy then asked:

I wanted to ask you if you could sort things out so I can get my rehabilitation paid for by the NHS. Can you do that?

Cameron certainly could help Ben. But the behaviour of his own MPs in parliament suggests he won’t. The NHS Reinstatement Bill is exactly the type of legislation that could ensure children like Ben get the treatment they need. The NHS is being crippled by the costs that privatisation, such as the Private Finance Initiative, has created. And turning the health service into a ‘competitive’ environment has led to an unhealthy fixation on that corporate buzzword: ‘efficiency’. Removing these pressures would mean NHS providers could worry less about what is ‘cost-effective’, and return to focusing on what is good for the patient.

However, with Jeremy Hunt at the helm of our health service, and these Tory backbenchers disrupting from the rear, the NHS Reinstatement Bill has an uphill battle ahead. Caroline Lucas has sworn she will keep up the fight, and the bill has huge support from doctors, academics and campaigners. But to be successful it needs political backing.

The Greens, the SNP, and some Labour MPs have pledged support. It’s now time for the rest to stand up, and drown out these filibustering toerags once and for all.