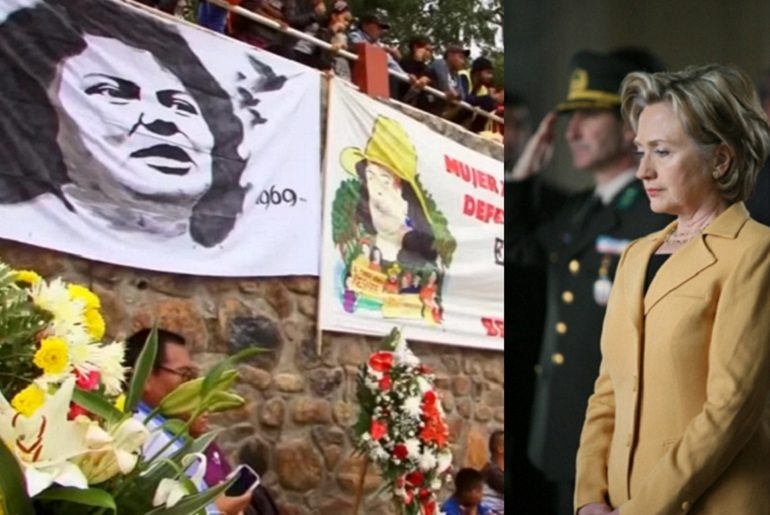 Berta Cáceres was an award-winning land activist, a leader in her community and a mother of four. She was shot four times while in bed, at 1am on 2 March. As a founding member of the Civic Council of Indigenous and Popular Organizations of Honduras (COPINH), Cáceres fought against logging, hydro-power and mining projects threatening indigenous people in Honduras. Her death has exposed the poor judgement of “impact investor” bank FMO, the bully tactics of mining corporations, and ‘murky situations‘ from Clinton’s time as Secretary of State.

Amnesty International and COPINH have already raised concerns about the investigation into Cáceres’ murder. Mexican activist Gustavo Castro Soto survived the killing by playing dead and was later detained by police. He was not treated well. The Mexican Ambassador almost got him on a flight to safety but ‘thugs’ at the airport dragged him back into custody.

Berta Cáceres was remarkable for her dedication to many environmental campaigns. Since the coup in 2009, corporate interests have led to land disputes, with the army siding with logging and mining companies over local populations. Hydroelectric projects were and are pushed forward to provide power for these industries. Local communities do not do well when mining comes to town, and have fought against an increasingly aggressive state to protect their land and way of life. Berta Cáceres dedicated her life to that struggle. Her success in preventing the Agua Zarca dam earned her the Goldman Environmental Prize, but it may have cost her her life.

A petition has been launched on sumofus.org to persuade Dutch investment bank FMO to withdraw from the hydro project still planned for Agua Zarca. In FMO’s defence, they have moved the project downstream (where the river is less sacred?) and it will no longer be a dam, but a wier re-channeling the water to power turbines – and no flooding.

The bank responded to news of Berta Cáceres’ murder by writing a letter to the President of Honduras, Don Hernández Alvarado, expressing their regret and supporting her freedom of speech. It is a pity they did not do so before her death. The bank confirmed to The Canary that they have been involved in the project since 2013. This was the same year that then COPINH leader, Tomas Garcia, was shot dead by the Honduran army during a peaceful protest. FMO explained that they have had direct contact with the Civic Council of Popular and Indigenous Organizations of Honduras (COPINH), several times:

various colleagues, including our Environmental & Social Specialist on the project had several meetings with COPINH representatives.

So, why didn’t they listen when the people said ‘NO’?  It’s true that FMO is far more socially aware than other banks, describing itself as an “impact investor” with a goal of “creating sustainable economic growth”. But there is a disconnect between ‘quality of life’ in material terms, and as defined by the local communities battling for years to protect their sacred river. Could it be that the darn natives just don’t know what’s good for them? Furthermore, investment commenced in 2013, the same year in which Berta Cáceres said:

The army has an assassination list of 18 wanted human rights fighters with my name at the top. I want to live, there are many things I still want to do in this world. I take precautions, but in the end, in this country where there is total impunity I am vulnerable. When they want to kill me, they will do it.

However, the flexibility that FMO has already demonstrated, by changing the location and design of this hydro project, puts them in a better light than some of the mining interests involved in Honduras. NB: No still means no.

A Council of Hemispheric Affairs overview of mining reform in Honduras by Dr. Lynn Holland found that:

The devastating impact of Hurricane Mitch in 1998 made it possible to change mining law to more decisively favor mining companies. With public attention focused on recovery and reconstruction, Honduran Congress was able to slip the General Mining Law through just four weeks after the hurricane hit. Much of it had been written by elements of the mining industry itself.

Canada‘s major role in Honduran mining is underappreciated. The biggest gold miners in Honduras are Canadian and operate with backing from the World Bank, to condemnation from COPINH. Mines have been closed after pollution events, but prosecution rarely occurs. A Report from MBendi (investor intelligence) lists several active gold opportunities in Honduras, and mentions other mineral deposits of commercial interest.

Mining in Honduras is not new, and ‘artisanal mining’ has supported local communities for many years. But Canadian and US mining outfits have displaced traditional workers and often operate with a heavy military presence.  A bunch of new mining concessions have recently come up for grabs in Honduras – just when activism was making some headway.  Director of the Honduran Mining institute, Agapito Rodríguez, boasted that investment would hit $2bn (unlikely) in 2015, because they had “laid the foundations and freed up a little more than 250,000ha with the objective of attracting fresh investment” in 2014. It could well be that the murder of Berta Cáceres heralds a new onslaught against the Honduran people and their land. Honduras is already the most dangerous place on earth for environmental activists. Certainly the breezy phrase “free-up” is gravely at odds with an illegitimate ‘democracy’ where thugs remove anyone who gets in its way.

The coup and the Clinton connection

The military coup in 2009 did nothing to protect Honduran land or people. President Manuel Zelaya had moved towards grassroots social movements, “the kinds of social reforms that the United States has always opposed” (Chomsky), and deals with Venezuela. The military kidnapped President Zelaya at gunpoint and flew him out of the country in his pyjamas. This was certainly a coup d’etat and was defined as such by the UN, the EU and other Latin America nations and dictionaries everywhere.

As Obama’s Secretary of State, Clinton refused to call what had happened a ‘coup’ in public. Doing so would have automatically cut off US non-humanitarian aid to Honduras. Members of Clinton’s own party wrote to Barack Obama about the outrage. But Hillary did not relent, despite being informed that the coup question was an “open and shut” case in US embassy cables.

In Clinton’s memoir, she admits that

In the subsequent days [after the coup] I spoke with my counterparts around the hemisphere, including Secretary [Patricia] Espinosa in Mexico…We strategized on a plan to restore order in Honduras and ensure that free and fair elections could be held quickly and legitimately, which would render the question of Zelaya moot.

Clinton’s emails revealed that she played a crucial role, delaying any action that could quickly restore Zelaya. Grahame Russell from Rights Action is not alone in describing the coup as “US and Canadian-backed“. Media Lens has bemoaned the under-reporting of Hillary Clinton’s connection to the state of affairs in Honduras in the US print media, as has FAIR. But it is online. The Nation ran an article titled The Clinton-backed Honduran Regime is picking-off indigenous leaders the day after Cáceres’ murder.

The Clintons have a great ally in Canadian billionaire Frank Giustra. Along with media outlets, Giustra has gold mining interests in Africa. He is known in the industry as a ‘mining promoter’ and presumably connects investors and miners. Although Bill and Frank like to fly around Latin America, and do philanthropic work together, Bill did bump into Frank in Kazakhstan when Frank was doing a spot of uranium shopping.

The Clintons’ connection with the Canadian mining magnate is labeled a threat to her campaign by Bloomberg Politics. Certainly, The Clintons’ ties to big business have dogged her campaign, and many democrats are uncomfortable with her performance as Secretary of State. Revelations about the Clinton Foundation do little to dispel the image of Hillary as an entrenched member of the establishment – let alone the oligarch hegemony. Given that her nomination looks increasingly insecure, Cáceres’ murder is untimely for them both.

Thousands turned out for Berta Cáceres’ funeral and she will be profoundly mourned by the community, and country, for which she did so much. One can imagine that to the gunmen who fired their weapons, she was just a loud-mouthed woman who needed to be silenced. But the truth is that Berta Cáceres’ fight connected her to international organisations and international politics still reeling from post-internet accountability. They would have done better to let her live.

-Learn how to protect your community from mining (and fracking) here

–Support The Canary so we can keep singing about these mines.