VIDEO: This is the shocking moment a grown man smashes a six-year-old refugee to the ground - The Canary 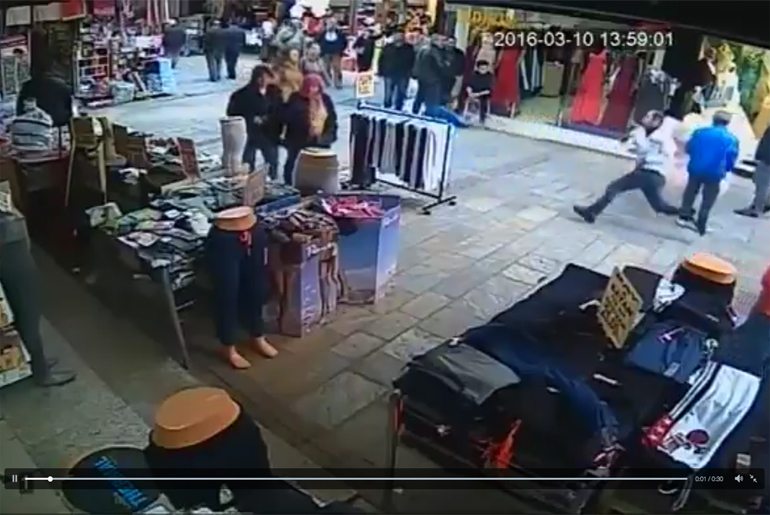 A CCTV camera has captured the shocking moment a grown man chased a refugee child through a Turkish marketplace, caught him, raised him above his head and smashed him to the ground. The incident provoked outrage among bystanders and on social media, but random outbursts of violence are just the tip of the iceberg of dangers faced by refugee children, who make up more than half of the world’s refugees.

The child has been named as Hasan Hantumani, a six-year-old who left Syria with his family four years ago. Eyewitnesses report that he briefly lost consciousness and was later given water by bystanders before leaving the marketplace in tears.

The man, a street food seller in Izmir, Turkey’s main coastal smuggling hub, has told a court he “regretted” his behaviour, which he says was a reaction to being ‘harassed‘ by the boy.

The incident is not the first to involve violence against refugee children in Turkey. And exploitation of refugee children is also rife. In February 2016, The Canary revealed how UK high street stores were using child labour in Turkish factories.

But whatever the comments on the Daily Mail article about the event would have you believe (here, if you’re brave enough), violence against refugee children is not a problem peculiar to Turkey. Away from CCTV cameras and intervening bystanders, refugee children around the world are at high risk of violence and exploitation.

This is as true in Europe as anywhere else. Of the one million people to arrive in Europe as the refugee crisis escalated last year, an estimated 270,000 were children. Of those, around 26,000 are thought to have arrived on their own.

Now, Europol estimates that at least 10,000 unaccompanied refugee children have gone missing since arriving in Europe, with many having been targeted by criminal gangs for sex trafficking or slavery.

Save the Children says:

We know that unaccompanied children … are the most vulnerable of the vulnerable. They have travelled hundreds of miles without the protection of adults or families. They face exploitation in all different forms, including sexual exploitation, often at the hands of criminal gangs. Save the Children has seen it in Italy, in Greece and in Calais too unfortunately.

So what are Europe’s governments and authorities doing to protect refugee children?

Well in Macedonia and in Calais, they are tear gassing them. In Hungary, they are erecting barbed wire fences to keep them out. In Calais, again, they are evicting hundreds of them before demolishing their makeshift homes.

Our own Prime Minister has kept the UK’s borders tightly shut to refugee children, including those who are legally entitled to be in the UK. As a result, around 150 unaccompanied children who have families in Britain have been consigned to stay indefinitely in horrific conditions in the Calais refugee camp, where several children have reported being raped.

Recently, under pressure, David Cameron promised to do more for refugee children in Europe. But his words have yet to be translated into meaningful action. Citizens UK reports (emphasis added):

The system for providing legal and safe family reunion has literally never once worked in the two years since it was created; resulting in children risking their lives in the backs of lorries or at the hands of traffickers.

Now dozens of public figures have come together to put more pressure on David Cameron and to sponsor unaccompanied children in Calais with links to the UK. After visiting the camps, children’s author Michael Morpurgo said:

Here is this island of misery between two of the richest countries in the globe, supposed to be liberal democracies … There are hundreds of young boys who do not have family, who are on their own. Why are we not simply sending a train for them, looking after them, housing them?

The video of the small child being assaulted by a grown man is shocking on several levels. The child is innocent and defenceless. He is a refugee through no fault of his own, and has probably already been through more than any six-year-old should have to. And he reminds us too much of too many other refugee children, who are being failed by those who should be protecting them over and over and over again.

– Support Citizens UK, which is persuading councils to participate in resettling Syrian refugees.

– Support Help Refugees, which is giving aid to people in the refugee camp in Calais.

– Support Good Chance Calais, a temporary theatre of hope in the heart of the refugee camp in Calais.

– Sign the Save The Children petition calling on the UK government to take its fair share of child refugees.

– Send a welcome message to a child refugee through Save The Children.

– Follow Calais Migrant Solidarity and find out about meetings, collections, events and protests.