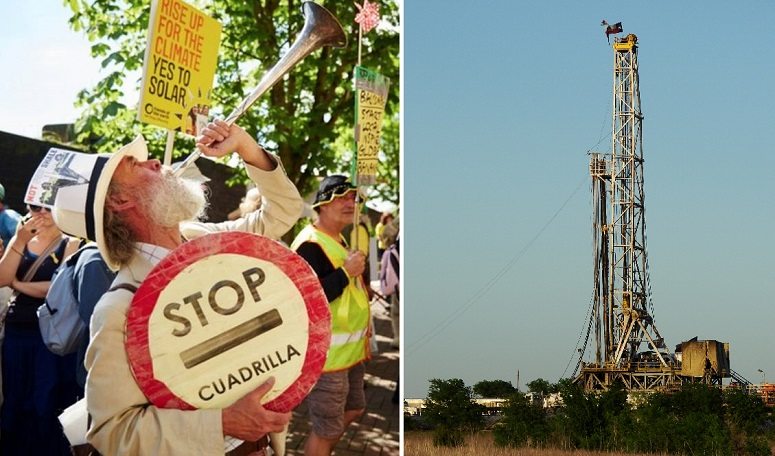 The Tories have been accused of drumming up support for fracking after a concerned mum was banned from taking part in research ‘workshops’ plugging Britain’s first shale gas mega plant.

Furious Sarah Bennett, 37, was approached twice on the same day by Department of Energy and Climate Change (DECC) researchers. They invited her to attend discussions on shale gas exploration, known as fracking, nearby her home in Wesham in Preston, Lancashire.

The first researcher cold called her at home. The second spoke to her as she picked up her daughter, aged six, from Wesham Primary School. The school is just two miles from the proposed fracking site.

Each offered her £180 to participate in the ‘workshops’, but when she told them she was opposed to fracking, they said only residents who were “on the fence” or “had not made their minds up” about natural gas extraction were allowed to attend.

Both times I was asked if I was willing to take part in a survey/focus group on fracking.

And both times I was told that I couldn’t attend as I have a firm view on it.

The initial woman told me they were looking for people who ‘still hadn’t made up their minds’.

While the second said they only wanted people who are ‘on the fence’ over the issue.

Cuadrilla’s planning applications to explore for shale gas at Preston New Road, and nearby Roseacre Wood, were rejected by Lancashire County Council on the grounds of noise and traffic impact.

Fracking was suspended in the UK in 2011 after earth tremors occurred where Cuadrilla had previously drilled in Blackpool.

However, the decision is subject to an ongoing Westminster appeal with the government’s verdict expected later this month.

Communities Secretary Greg Clark has been given the final say on the decision to allow drilling at the two sites in Lancashire.

If Cuadrilla’s plans – the first of their kind – are allowed to go ahead, it could set a precedent for the approval of similar planning applications, paving the way for multinational oil and gas firms to build large scale fracking wells across the UK.

Claire Stephenson, of anti-fracking Preston New Road Action Group, believes the government could be using the ‘workshops’ as closed talking shops to soften public opinion on fracking and sell its benefits to ambivalent residents in Lancashire’s communities.

Preston New Road Action Group are appalled to learn that the Department of Energy and Climate Change are funding research on fracking opinions within the sensitive areas of Lancashire communities that are under threat from fracking.

It’s incredibly shocking that DECC would choose this insensitive time period to begin canvassing for opinions on fracking that don’t include actually being against this form of fossil fuel extraction.

We are mid-way through a sizeable and stressful Public Inquiry for Cuadrilla’s appeals, where local communities are fighting to retain their ways of life before Westminster make the final decision.

It seems very inflammatory to attempt to garner what seems to be underhand support for the industry by excluding people who already have formulated views against fracking, whilst using what we presume is public money to compensate study participants.

A notice was put up in the local post office in Wesham asking for volunteers to take part in a two day workshop, on March 12 and April 9, in return for payment of £180.

The subject of discussion states, ‘Options for Future Energy Use’.

A copy of the flyer, titled Future Energy Workshops, has been obtained by The Canary.

As a research company we are holding two workshops in Preston.

The workshops are being held over two Saturdays 12th March and 9th April.

We pay participants £180 as a thank you for their time.

Preston New Road Action Group asked the DECC why they were paying people to take part in fracking surveys in exchange for taxpayer-funded fees.

In response, they tweeted:

The research is to understand how people form views on #fracking, not influence, so targets people who are still undecided.

Fracking, or hydraulic fracturing, involves drilling down into the earth before pumping huge amounts of water at high pressure at the rock to release the gas inside.

Widespread use of fracking in the US, where unregulated shale gas exploration has plighted large swaths of the country, has prompted environmental concerns.

Small earth tremors – as seen in Blackpool – caused by the fracking process are also a concern.

The proposed Cuadrilla site is planned to have four shale gas wells up to 1.15 miles in length.

According the Frack Off, the site will produce over 13.3 million gallons of radioactive waste which will be dumped in an unspecified location.

The implications [of fracking] really don’t bear thinking about.

The government and the industry are in denial over the negative impacts of fracking that are appearing in other countries in the world.

Sarah described the possibility of raising her children near a large fracking site as a “terrifying prospect”.

It won’t happen. I’ll relocate. It’s not worth the risk.

I have a duty as a mother to provide the best upbringing I can for my kids.

Living close to a fracking well is never going to fit in with my values.

I own a property in Wesham and will seek compensation for any loss of value upon its sale.

-Tell everyone you know about fracking and its environmental and health impacts.