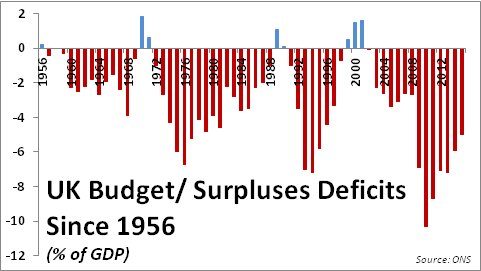 This graph appearing on the BBC website’s coverage of the 2016 budget, originally from RBS Economics, seems to suggest that the Conservatives have been responsible for all budget surpluses, while Labour has been responsible for the deficits. The reality could not be further from the truth.

Showing the deficits in red, the traditional colour of the Labour party, and the surpluses in blue paints a misleading picture of the actual fiscal responsibility of each government.

What they don’t mention is that many of those surpluses came within Labour governments. An utterly different picture than the myths that the Tories try to peddle.

Here is a graph which shows the surpluses and deficits with the Tories marked in blue, and Labour in red. As can be seen, the strongest surpluses came from Labour. 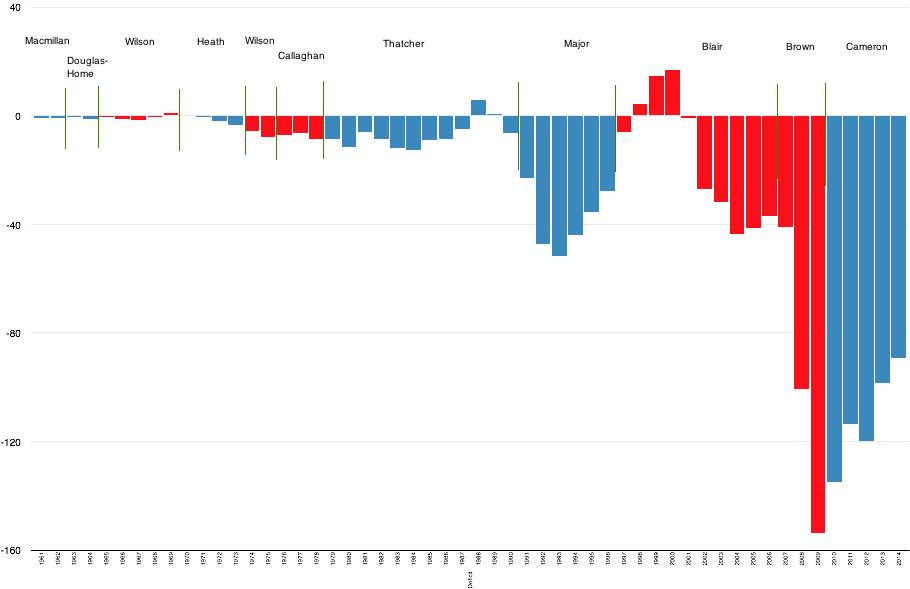 In this budget, George Osborne will once again be telling us to accept deeper cuts, and more austerity, in order to move towards a budget surplus. Recent weeks have seen attacks on disabled people, junior doctors, and on council tenants, and the budget will turn state schools into cash-cows for corporations through its academy drive.

But has this reduced debt by any degree? Actually, the Tories have created more debt than all previous Labour governments combined.

And has any of this made the economy more stable? In fact, economists warn that George Osborne’s policies are taking us to the brink of another financial crises, and may push us over the edge.

You can see a more detailed demolition of Tory economic myths here. And if you just love graphs, here are 7 that show how the Conservatives can’t be trusted on the economy.

–Get involved in Occupy.