This disaster could kill millions but no one is telling the people at risk (tweets, video) - The Canary 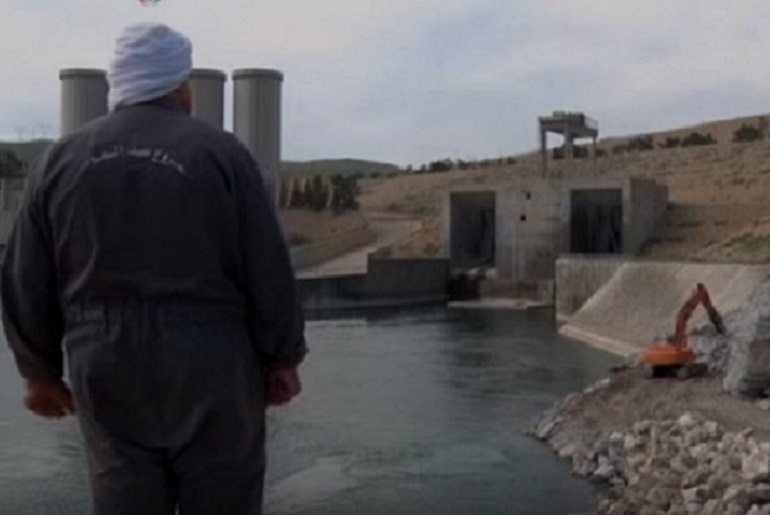 The Mosul Dam is at risk of collapse. Everyone responsible for keeping the dam safe is hedging their bets and the people at risk are not being protected. Though an engineer at the site admitted that cracks appear daily, they also said that there is no ‘tangible evidence’ that the dam is about to blow. Washington insists otherwise, though some fear that the dam’s recent place in the media spotlight is an excuse to put more troops on the ground. But there’s more to it than that.

What would happen if the Mosul Dam collapses?
Right now, there is no coherent evacuation plan, though talk of putting together an early warning system has surfaced since Reuters revealed that Iraqis are being ‘kept in the dark‘. The structure measures over 2 miles across and stands over 1,000ft above sea level. The Mosul Dam holds back 11 billion cubic metres of water, and coming from that elevation it will travel with biblical destructive power. There would be a staggering death toll. The lowest estimate of the number likely to die is 500,000, but the US Embassy has put the figure at three times that. The fact sheet for the Mosul Dam Crisis Symposium (April 2016) expects a wave 180ft high to leave the dam, and reach the city of Mosul within 4 hours. By the time it reaches the city it will have reduced in height, but that is still a towering, terrifying wave 78ft high. Most of the buildings in Mosul and Baghdad are not tall, or well-built enough to offer refuge to those left behind. Collapse would also mean no running water and no electricity in large parts of the country.

However, in January 2016, the Ministry of Water Resources was still denying that there was a problem in reaction to social media chatter about the instability of the dam.

Social media and some press outlets have reported problems in the Mosul Dam Complex. In response to these reports the Ministry of Water Resources denies any such allegations and responded that the dam is working at its natural output and that maintenance works are ongoing currently and are continuously under the personal supervision of his excellency the Minister of Water Resources aided by experts from the ministry and with the management team and director of the Mosul dam Mr. Riad Ez al Deen.

Other villages, towns and cities are in its obliterating path – including Baghdad.

Whether the immediate death toll is the equivalent of three Hiroshimas or ten – it is one that will keep rising. The water would be filled with lethal debris: chunks of concrete, boulders, bricks, bodies, unexploded ordinance, and oil. Putrid floodwaters bring disease and destroy agricultural land. The water would also wipe out infrastructure, and obliterate the industries along the banks of the River Tigris, along with the farmland. Failure of the Mosul Dam would add at least a million refugees to the region’s current crisis, if not more, and as awareness of the problem grows, people may begin abandoning the area.

Disaster or gift for the global oil market?

Iraq’s infrastructure also means oil infrastructure. Pump stations (Xs) and pipelines (lines) are in the water’s path, and unlikely to survive intact. The pollution will devastate the environment for many years to come.

Oil and gas infrastructure downstream from the Mosul Dam pic.twitter.com/DqBKRvWX1q

Some oil industry pundits say that a failure of the dam would send oil prices back up again, but it is also likely that market share would be taken up by other producers. As the dam becomes news and coverage snowballs, the disaster will prompt traders to take positions, and some will undoubtedly profit. Iraq has the 5th largest proven reserves in the world, 143bn barrels, and that number is expected to rise. An uninhabitable zone where only oil facilities flourish is not hard to imagine.

Why is the dam so dangerous?
The Mosul Dam is an epic monument to human folly. Constructed on water-soluble gypsum, plugging holes with a constant supply of concrete grouting was factored into its design. When Daesh took the dam, temporarily, in 2014, grouting was suspended, equipment was destroyed and workers were killed. Since then, workers, reduced in number from 300 to 30, have sometimes gone without pay and there have been problems in the supply chain for the grouting materials.

The dam, called ‘the most dangerous dam in the world’ by the US Army Engineering Corps. and other engineers, is quite simply not up to the job. Apart from anything else, the area is seismically active, with 17 earthquakes in the last year. Italian firm Trevi has just signed an 18-month contract to repair a jammed sluice gate and strengthen the dam for nearly 300m dollars. Increased military presence aims to make the area safe for engineers to begin their work. But in the meantime snow-melt from the Turkish mountains will add to the pressure of the reservoir behind the dam. The single, working sluice gate should not be operated alone due to the structural imbalance this creates – but has now been opened nevertheless. The Mosul Dam is not the only one that threatens those living in its shadow. Ageing hydropower infrastructure is causing problems all over the world.

Sinkholes appearing downstream of the Mosul Dam are not a new phenomenon. However, perhaps with an eye on his legacy, or getting more troops into the area, Obama has been putting pressure on the Iraqi government to take action. The Iraqi leaders were initially unwilling to recognise the scale of the threat, but have softened their position, since the UN has briefed on the possibility of catastrophe.

Let us hope that the Peace Ambassadors for Iraq symposium in April produces a workable evacuation plan, that the early warning system materialises, and that oil merchants take the responsible action of cutting supply to the pipelines. Possible solutions include draining the dam and filling another reservoir further downstream. Construction of a second dam was started, but abandoned due to cost. Perhaps, the threat of catastrophic dam failure will help to unite all factions against the real common enemies – human folly and the unforgiving physics of so much water.