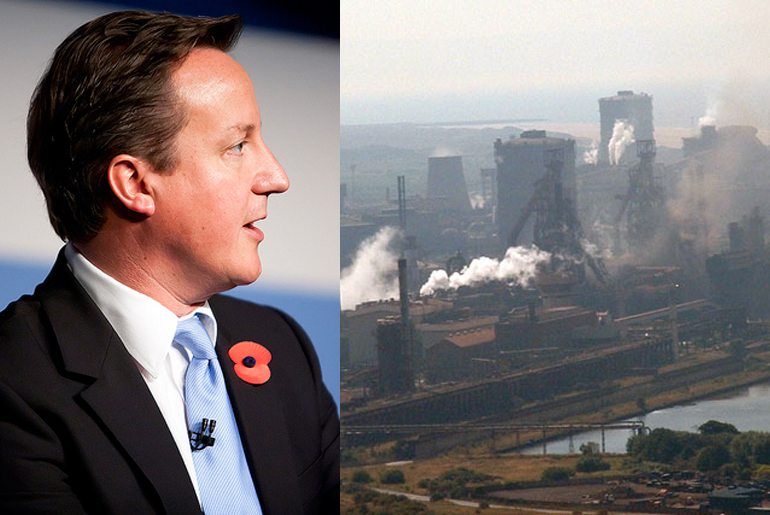 If Tata Steel sells off its UK plants, 40,000 people will lose their jobs and whole communities will go to the wall. Instead of stepping up to take control of the crisis, David Cameron’s government has dithered – not because it was unprepared, but simply because it doesn’t care.

When 15,000 steel workers found out they were probably about to lose their jobs, David Cameron was in Lanzarote enjoying some “time to think”, George Osborne was somewhere between eating ice creams in Cheshire and heading to Paris, and Business Secretary Sajid Javid was on a plane to Australia for a work/holiday trip with his daughter while staff in his department were preparing for a drama school workshop.

By the time Cameron had assembled a few random ministers for an emergency meeting on Thursday morning (no sign of Osborne or Javid yet), which apparently achieved no concrete results, much of the country had long been screaming for action to save the steel industry and the communities that rely on it.

By Thursday morning, 100,000 people had already joined Jeremy Corbyn’s call for the government to recall parliament and take urgent action to save the steel industry. This has since been joined by the Green party. Corbyn himself had already been to Port Talbot, one of the steel communities reeling from the potential job losses, where he said:

I pledge support for immediate ­government intervention to protect our steel industry and not see it destroyed on the altar of a global corporation which has decided somewhere along the line that Port Talbot is expendable, just like anywhere else they have decided is ­expendable. Sorry, it’s not.

The Conservative government’s dithering over the steel crisis is not down to incompetence, or being caught on the hop. As The Canary reported on Wednesday, the crisis has been a long time coming. The government has had several opportunities to support the industry before the crisis boiled over. But it didn’t just miss these opportunities; it sometimes sabotaged them – choosing, for example, to block the EU’s move to impose higher tariffs on China to stop it from flooding Europe with cheap steel.

So why is the government dithering? Paul Mason put it simply in his analysis of the crisis:

They do not give a sh*t.

[Neoliberalism] means, when market logic clashes with human logic, the market must prevail and you must not give a sh*t about the social consequences.

And the social consequences for the closure of Tata’s plants are enormous. 15,000 people directly employed by Tata across the UK will lose their jobs. Another 25,000 jobs in its supply chain are under threat. Whole communities that have grown up around the steelworks face devastation, as steelworker Vince Lewis told The Mirror:

Closure of this plant could put Port Talbot back in the Dark Ages. There is already a lot of deprivation. There is nothing else here really.

And it’s not just Port Talbot. Tata has plants at Trostre, Shotton, Llanwern and Newport in Wales, and in Rotherham and Corby in England, although the government’s own press officers don’t seem to realise this.

Nor is it just Tata. More than 1,000 UK companies cite steel casting or manufacturing as one of their main areas of business, and the headwinds facing Tata – China’s dumping of cheap steel and a global steel glut, among others – face them too.

Government intervention to bail out failing industries has, of course, happened before – most notably for the failing financial industry. But for all of Osborne’s promises to rebalance our economy back towards manufacturing a few years ago, British manufacturing is being allowed to die, continuing a trend that has seen it cut by two-thirds over the past 30 years, under successive Conservative and New Labour governments.

Writing in The Guardian, Aditya Chakrabortty calls this decline in manufacturing the “greatest de-industrialisation of any major nation”, with nothing to take its place:

There’s ample evidence that the promised rewards of this post-industrial future haven’t materialised. What was sold as economic modernisation has led to industrial decay, with too often nothing to replace it.

Nothing, that is, but debt, the service sector, and ever-increasing financialisation.

Satirical website The Daily Mash said it best when it ‘quoted‘ Sajid Javid:

Tragically, the industry has been hit by a perfect storm of being in the provinces, traditionally supporting Labour and not being financial services… If only these plants manufactured something useful, like insurance derivatives supported by credit default swaps, then we’d gladly go billions into debt for them. But steel? What’s that even for?

If we lose the UK’s steel industry, we will lose it for good, and the communities that depend on it will be changed beyond recognition. The government has had plenty of time to act on the UK’s steel crisis – but it just wasn’t a priority. Now that the crisis has boiled over into an emergency, the government needs to make it a priority, and fast.