David Cameron has been put up for sale on eBay (and no, it's not satire) - The Canary 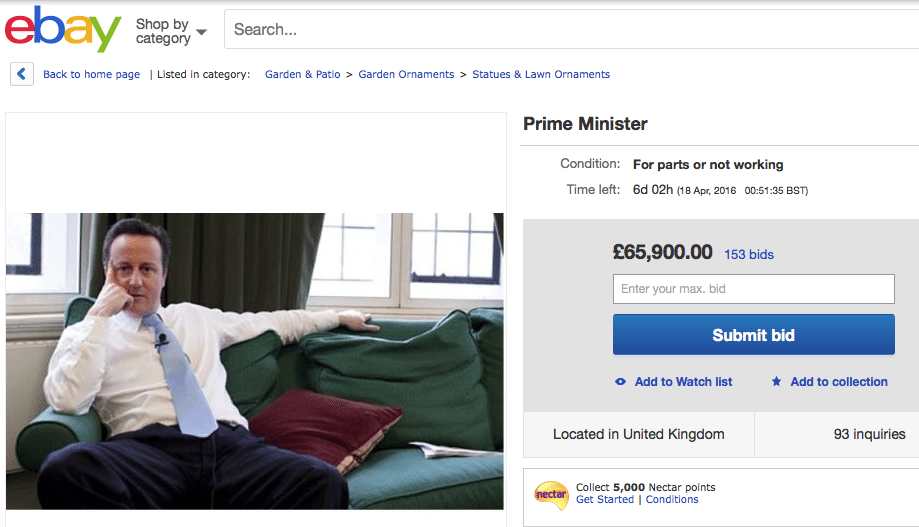 In a fresh blow to the Prime Minister, members of the public have now put David Cameron up for sale on eBay – in an attempt to further embarrass the Conservative leader into resigning his post.

The ad was placed by HSBC whistleblower Nicholas Wilson (@nw_nicholas) and has since gone viral, attracting over 150 bids by late evening Monday – working up a total asking price of £65,900. The listing was promptly removed from the site, but did read:

Used Prime Minister. No longer needed. Needs a bit of TLC. No box or instructions. Buyer must collect. Seller not prepared to touch item. Pick up from central London, address will be supplied on completion of sale. Buyer must arrange own transport.

Proceeds will go towards Wilson’s campaign to expose what he describes as “massive HSBC fraud and Cameron’s cover-up.”

The case is reminiscent of the move by Swansea University student Hannah Quinn, who put the entire campus up for sale on eBay in 2004 in order to protest the introduction of higher tuition fees and closure of key departments.

The news comes amid an overwhelming drive for Mr Cameron to resign.

Calls for the resignation of the Prime Minister have now moved beyond the halls of Westminster, and into the public sphere – not only in online activism, but in planned mass demonstrations which will mean Cameron facing his toughest week in politics.

In the wake of exposure of the extent of Prime Minister David Cameron’s tax avoidance, a large scale public call for a snap General Election in 2016 is going viral.

The petition, posted on the Government’s petition site by Eleanor Machin, reads:

The General Public were purposefully misguided before the 2015 election.The lies David Cameron told before the election have now been widely acknowledged as such, and it is only reasonable that the public should be allowed to vote with full knowledge about his true agenda in 2016.

Petitions on the site need to attract 100,000 signatures in order to be considered for debate in parliament. This petition has already gathered over 129,000 signatures.

The Prime Minister is facing a war on several fronts:

Thousands of protesters marched on Downing Street on Saturday 9 April, demanding the resignation of Cameron over the tax affair and ideological austerity. Another, even larger demonstration, set to take place on Saturday 16 April, is being organised by The People’s Assembly.

The government is also facing the prospect of joint action by teachers and junior doctors over the summer, after attacks on both health and education forced professionals into all-out war. The summer’s action will constitute the biggest strike action on UK soil for decades.

Meanwhile, hundreds of thousands have participated in the #ResignCameron, #CameronTaxSongs and various other trending hashtags to mock and harrass the Prime Minister into leaving office.

This mass response has been triggered by the perception of Cameron’s cabinet as an increasingly radical and intransigent government without a mandate. The public were promised “All in this together”, and instead they got “You pay, we play.”

When not transferring the burden of taxation from those with the most to those with the least, the Conservative government has continued its fire-sale of public assets. By the end of this financial year, George Osborne will also have sold off more public assets than any Chancellor in UK history – outperforming the most ruthless privateers of the Thatcher era.

After six years of this asset-stripping and tax-avoiding, the UK’s current account deficit is not only worse than it was in 2010, it is worse than during any period since records began in 1955. Furthermore, the Chancellor continues to miss his own targets on reducing the fiscal deficit (taxes versus spending), all while clocking up more debt in his first three years in parliament than New Labour managed to in the previous 13.

Having scraped together a mere 24% of the popular vote to win the 2015 election, the Conservative party has nowhere near the kind of mandate that permits such shoddy performance for long. Like Thatcher and Blair before him, David Cameron may be about to discover that he has confused the famous British patience for apathy – and be forced to bow out with the same forced humility.

You can bid on the Prime Minister here.