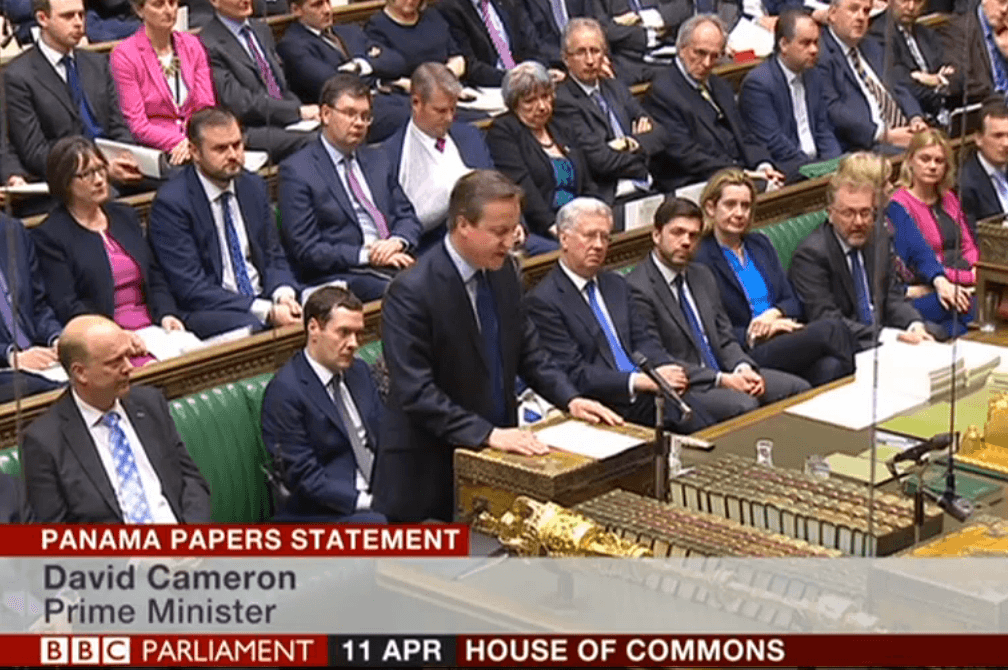 David Cameron has rejected growing calls for public record of MP’s tax returns. While the other benches remained quiet at the news, it was met with cheers from the Conservatives (4 seconds in):

In parliament on Monday, Cameron justified his decision by championing the ‘robust rules’ at parliament:

We already have robust rules on members’ interest and their declaration and I believe that’s the model we should continue to follow.

The very same ‘robust rules’ that allowed two general elections to take place without the public being aware that the two-time winning candidate – the current Prime Minister himself – engaged in tax avoidance. This has now elicited an over 130,000 strong petition calling for a snap general election, and volleys of calls for Cameron to resign.

Considering MPs are on our payroll they are accountable to us. Personally avoiding tax is evidently a conflict of interest if you are an MP, the same as any other financial interest. If MPs benefit from tax avoidance they have a financial interest in maintaining the loopholes they are hired to close.

All MPs publicly publishing their tax returns would restore trust in politicians. Trust that would be valuable to the politicians themselves. So even without such a brazen display of joy from the Conservative benches, it is suspicious that MPs are not volunteering to publish their returns to gain political capital.

The howling hypocrisy of the government

The public do not need to know what MPs have had for lunch, just their potential conflicts of interests. Yet the government are denying a basic level of transparency, with the Prime Minister initially calling his own tax affairs a “private matter”.

Meanwhile, they are looking to pass legislation that will make unbridled mass spying on us, the people who pay their salary, totally legal. As I wrote previously:

These documents also show that GCHQ has the ability to turn on our microphones and cameras on our computers, listen to our phone calls and track our locations, while collecting all sorts of data about what we do online.

Now, Theresa May’s Investigatory Powers Bill or ‘snoopers charter’ seeks to make mass surveillance official government policy. Ostensibly, this is to prevent terrorism, but there is no evidence it works. In fact, treating the entire country as suspects is likely detrimental for terrorism prevention. It’s the equivalent of building a breathtakingly unnecessary and humongous haystack to find a handful of needles in.

The government want unrestricted access to all of our personal information, yet will not even publicly declare their own financial interests in full. The phrase ‘do as I say, not how I do’ has never been so applicable.

Even without the joyous reaction from the Conservative benches, MPs not willingly publishing their tax returns to garner trust, is suspicious.