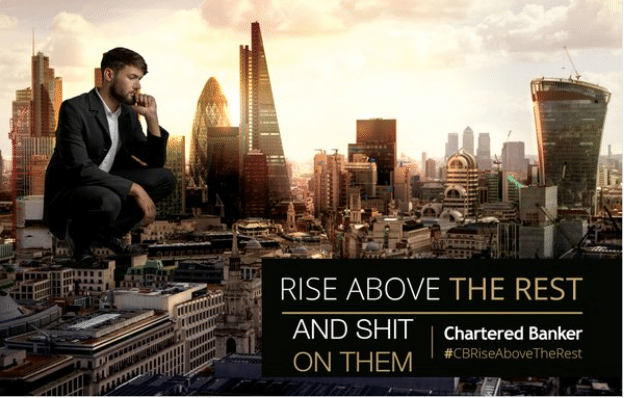 An unfortunately ill-considered advert for the City of London’s ‘Young Banker of the Year’ award has accidentally managed to sum up everything wrong with the heart of our financial services industry – and social media users are all over it.

The Chartered Banker advert has been plastered all over the London tube network, and features a giant banker sort of…squatting over the capital. 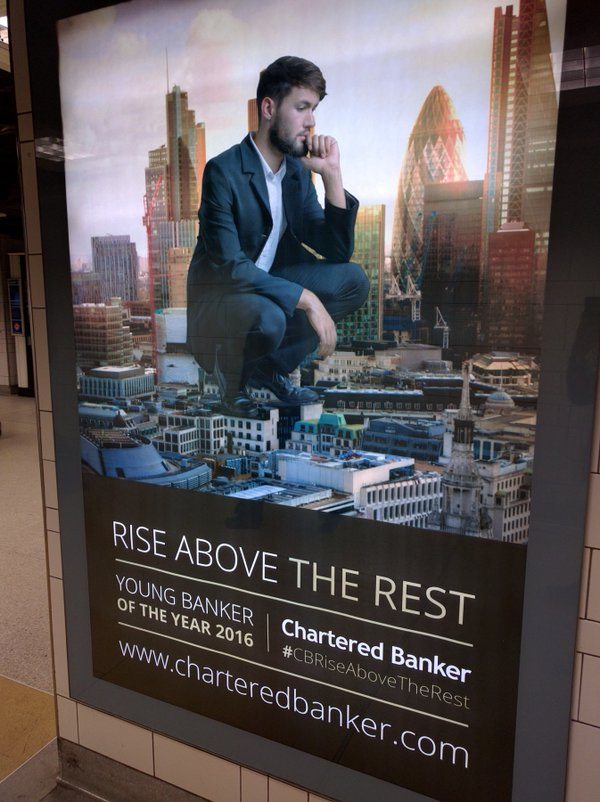 It didn’t take long for commuters to notice the underlying message in the advert, so they decided to gatecrash the #cbriseabovetherest hashtag (intended to praise and promote the event) and share their thoughts on the ad instead.

Fuck whoever thought this ad was a good idea. “what if, right, a giant banker was taking a literal shit on the city” pic.twitter.com/m8WO9CvgI3

Some bankers are too big to fail which is why they treat us so badly. #cbriseabovetherest pic.twitter.com/DNY4yprf4x

#CBRiseAboveTheRest I may have altered the poster so that it accurately reflects the role of investment banking. pic.twitter.com/5cO9coItXn

Whoever wins Young Banker of the Year gets to take a massive dump on London #cbriseabovetherest pic.twitter.com/oz0WDDCOK4

Let’s face it, the design team accidentally summed up the reality behind the myth of the trickle down effect. Something is trickling down alright, but it doesn’t smell like wealth.

Four decades of neoliberal economic policy removed the redistributive measures that spread the benefits of wealth, and the vast majority of income gains since have been confined to the already wealthy. In short, the rich are getting richer at an astonishing rate, and the poor are not.

Here’s what has happened in the United States since 1979:

This graph by the US Congressional Budget Office sums up the findings of a June 2010 report. Between 1979 and 2007 the net income of the richest 1% of Americans rose by 281%, whilst that of the poorest fifth rose by 16%.

The same has happened here in Britain.

Danny Dorling, professor of human geography at Sheffield University, tracked the share of national income going to the richest 1% from the end of the first world war in 1918, to 2012. He made the unsurprising discovery that after falling for more than a century before the Thatcher government, their share then began rising – and has done so ever since. Things are now just as unequal as they were in 1918.

The evidence is plain for all to see. The current economic and political system is making our country, and our world, a more unequal place. It is making it harder, not easier, for people to make the very most of themselves. For several generations, parents were able to say to their children: ‘your lot have it so much better than we did.’ But that simply is not true today. Young adults completing their GCSEs today have got it harder than any generation in decades – and the spectre of a young banker taking a dump on their dreams could not sum it up better.