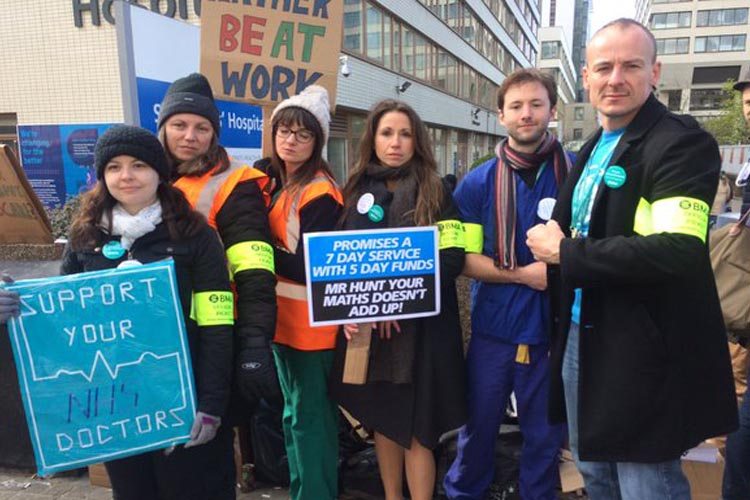 Unions are calling it a “dark day” for workers, as on 3 May the government’s trade union bill passed with only a few amendments dampening the full draconian force of the original bill. While passing through the Commons it was called “sinister”, “spiteful” and an “assault on the right of working people”.

The bill in its final form requires a 50% turnout of eligible union members for strikes to be legal. To put this in perspective, on 5 May the second largest set of elections across the UK will take place with 124 council seats, regional and national elections as well as mayoral elections for several cities including London. In the 2014 local elections the voter turnout was just 36%, and that was not considered abhorrently low.

So how can it be right to set the bar higher for union ballots? This is merely a sly suppression of the right to organise.

This will not effect all strike action. For instance, the current Junior Doctors strikes in which a staggering 98% of those eligible voted in favour. But it does mean that industries with poorer organisation, communication, and less of a workplace culture will often not be legally able to strike, even if they desperately need to make their demands heard.

The bill enshrines in law a four-month time limit on industrial action, after which point the union must re-cast ballots to continue, regardless of whether the dispute has been resolved.

Could it seriously be said that the 98% voting in favour of the action in November 2015 could not be regarded as a proper mandate for action beyond that date (…) ?

Such a time limit places further pressures on the strikers to leave the picket line rather than on the employer to put a decent offer on the table.

It was much hoped that one significant amendment would be the introduction of E-balloting. That means workers would not be required to turn up in person to vote for strike action, but could instead do it from their computers. This could mean a skyrocketing participation in ballots, and perhaps a lease of life for workplace democracy.

However, the wording of the bill provides merely that a review of E-balloting will be undertaken. This is suggestive of delaying tactics, a way to put the notion on hold indefinitely.

The government was forced to climb down on its proposals to abolish the ‘opt-out’ for union subscriptions, whereby fees are deducted from salaries by default.

But buried in the wording is a clause that makes it illegal for unions to ask money of any member who has not specifically indicated they wish to contribute beforehand.

Labour’s Ian McNicol has previously estimated that the changes could cost unions up to 90% of their funding.

Given that Labour draws the majority of its funding from union contributions Liberal Democrat Greg Mulholland said the bill was:

clearly a cynical attack on the main source of funding for the Labour Party.

The Deafening Silence of UK Media

At the time of writing there has been an absolute silence on final votes. Sure, in the last few weeks the main media sources have chimed in and had their say. But now the final votes have been counted not a word has been breathed.

Who’s willing to bet that they won’t print anything until after Thursday’s elections?

The media is complacent in the face of this unprecedented attack on workers rights. Only after its too late will the majority realise that their very rights and ability to organise have been silently stripped from them.

Though passed, the full and final wording of the bill has not been released. The information here has been pieced together from transcripts from the House of Lords and the House of Commons. This could mean we are in for a few more nasty surprises as the details emerge. It has been suggested that the bill may be illegal under European human rights law that protects the right to take strike action.

What is happening to workers and the unions that represent them is an unprecedented attack on the right to organise. It is a cynical and manipulative form of politics by which the Conservatives are attempting to starve their opponents of funding. There will be more strikes, but they will be illegal ones, impossible to predict, and less likely to result in any decent settlement for workers. The Tories have unwittingly opened Pandora’s box.

5 May, 7am to 10pm is the biggest set of elections, outside the general election, in the UK, including: