In recent weeks, it has been argued by pundits, politicians and pro-Israel groups alike, that to compare the actions of Israel to those of Nazi Germany is intrinsically anti-semitic. As a journalist with extensive experience in the region, I would like to lay out three of the inconvenient truths about modern Israel which make it wholly legitimate, and indeed urgent, to make this comparison, and avoid repeating the horrors of the past.

The forced sterilisation of Ethiopian Jews

The Ethiopian Jews are perhaps Israel’s best kept secret. The state which defines itself as a safe haven for the world’s Jews has a decidedly frosty reception for Jews who happen to be black. Whilst facing heinous anti-Semitism in the post Haile Salessie Ethiopia (2,500 were killed, 7000 made homeless) Ethiopian Jews sought sanctuary in Israel. Instead, during the 1980’s and 1990’s thousands spent years and hundreds died in transit camps outside Israel while the state procrastinated over its welcome policy for these black Jews.

When Israel finally started to let some in, they were thrown into an eye watering bureaucracy of what Israel’s Haaretz newspaper describes as ‘repressive, racist and paternalistic policies’. This involves going through state run ‘absorption centres’ which manage every inch of their lives in Israel. The immigrant is tied to the state; overseen and controlled through these absorption centres which dictate where they live, where they can work, where their children can be educated, and other crucial elements of their lives. It was at these absorption centres that Ethiopian women were given contraceptive injections, without their knowledge, in state efforts to prevent the procreation of black Jews in Israel.

One of the Jewish-Ethiopian women interviewed is quoted as saying:

“They [medical staff] told us they are inoculations. We took it every three months. We said we didn’t want to.”

When these allegations were first made, the Israeli state responded with contemptuous denials but has since been forced through overwhelming evidence to admit the disgraceful practice.

“threaten our existence as a Jewish and democratic state”.

If any other nation was systematically engaged in effectively sterilising Jewish women, we would rightly be making the connection to the racist ideology that drove the Third Reich to do the same. It is a lesson from history, invoked in efforts to prevent further tragedies. Therefore, regardless of the ethnic origin or religion of the perpetrators, it is legitimate to do so today.

The mainstreaming of incitement to ethnic cleansing and genocide

Here are just some samples of the sort of sentiments now acceptable to air in public in Israel today. 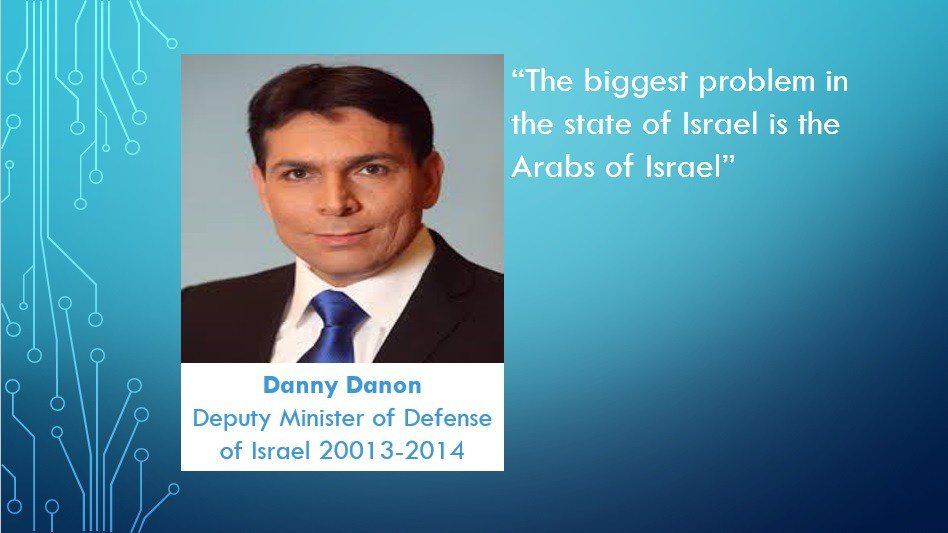 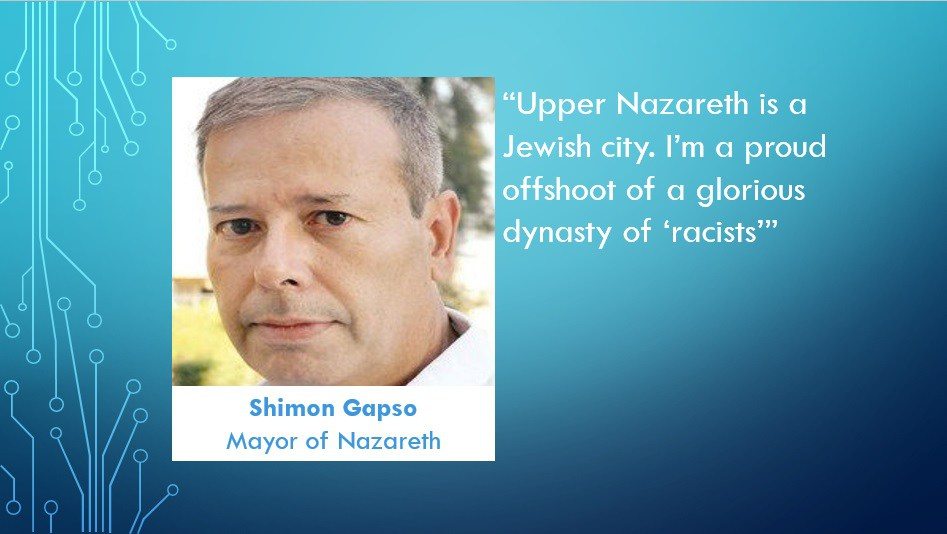 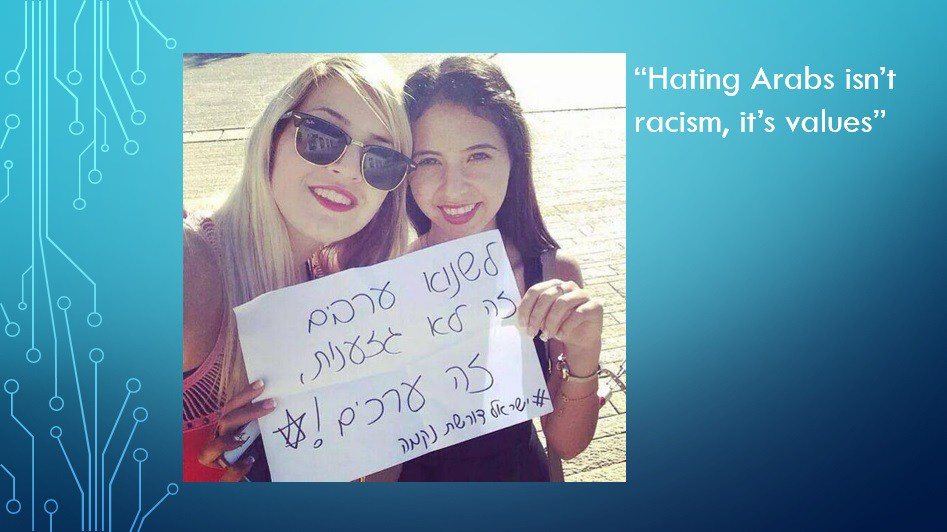 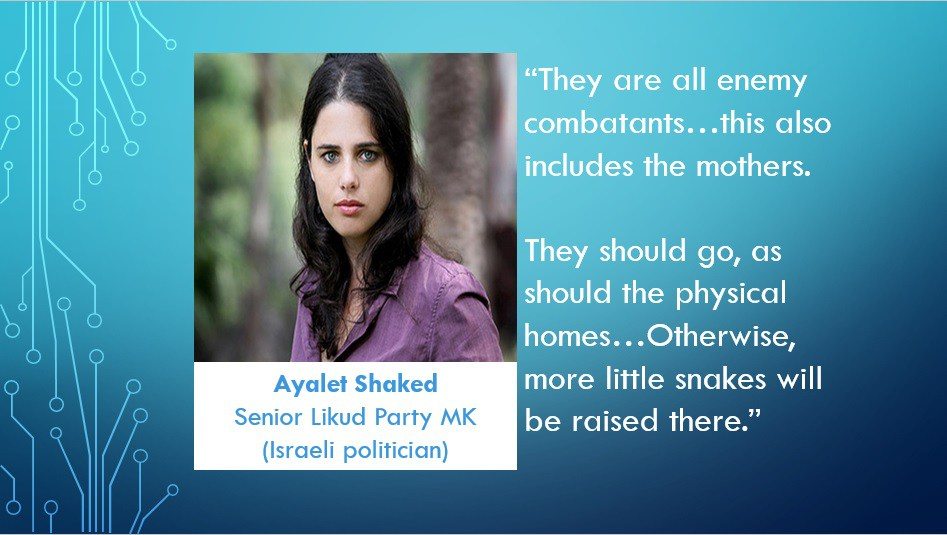 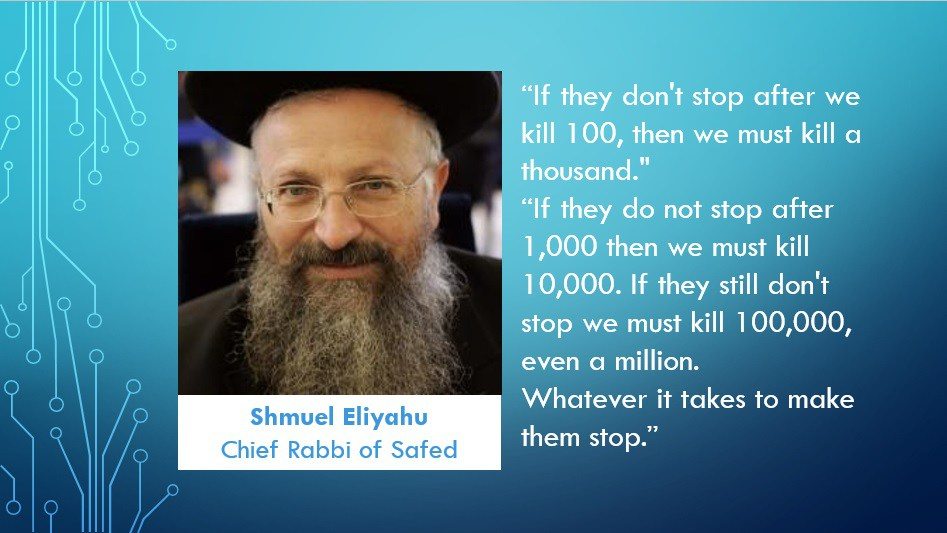 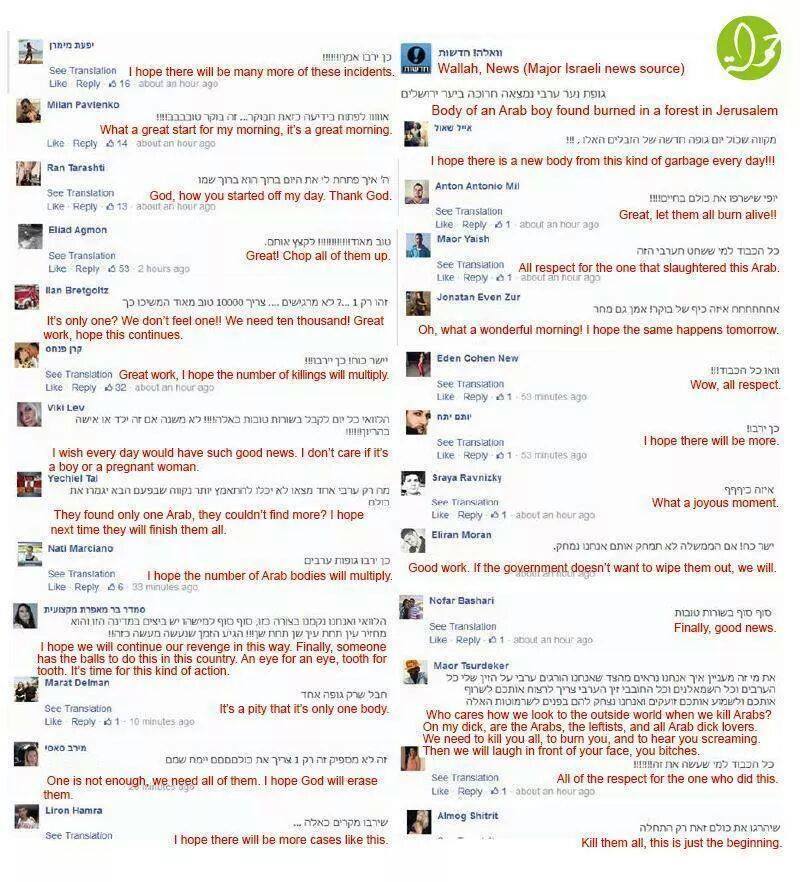 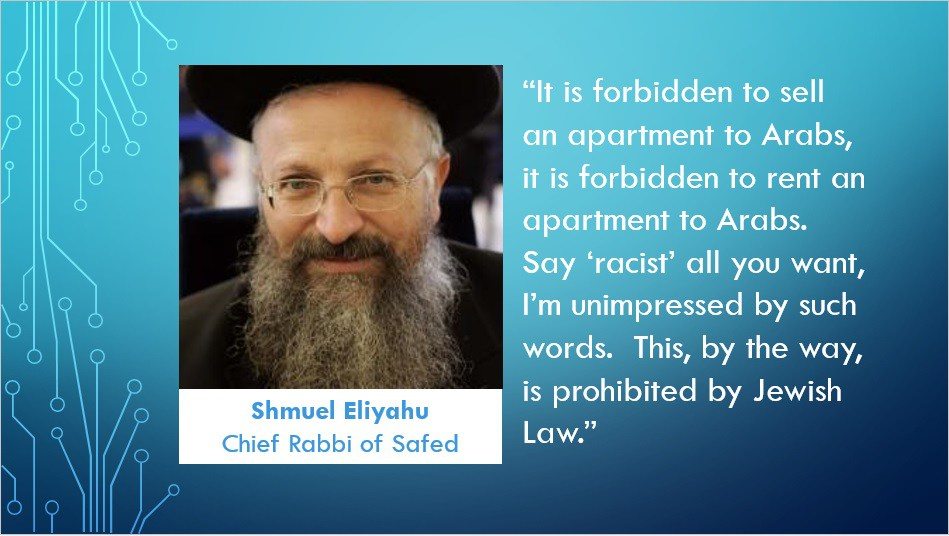 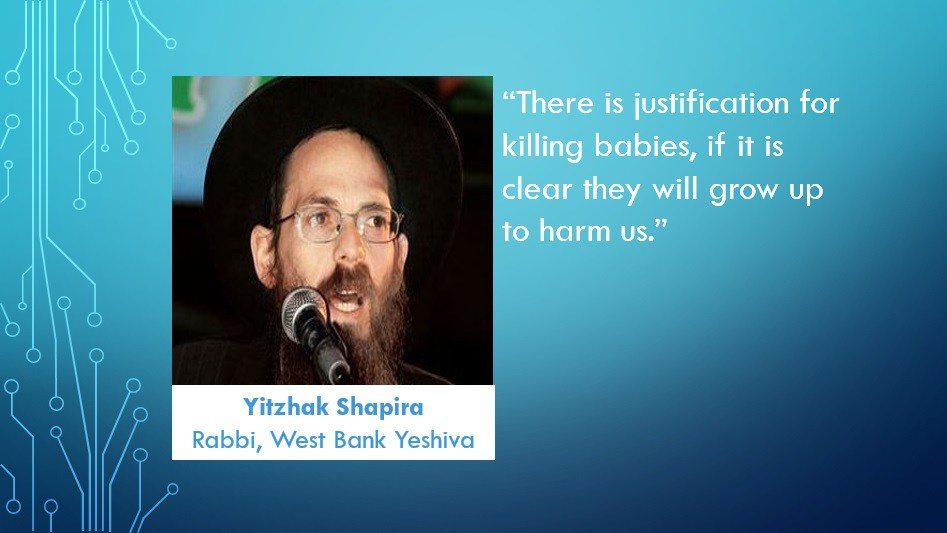 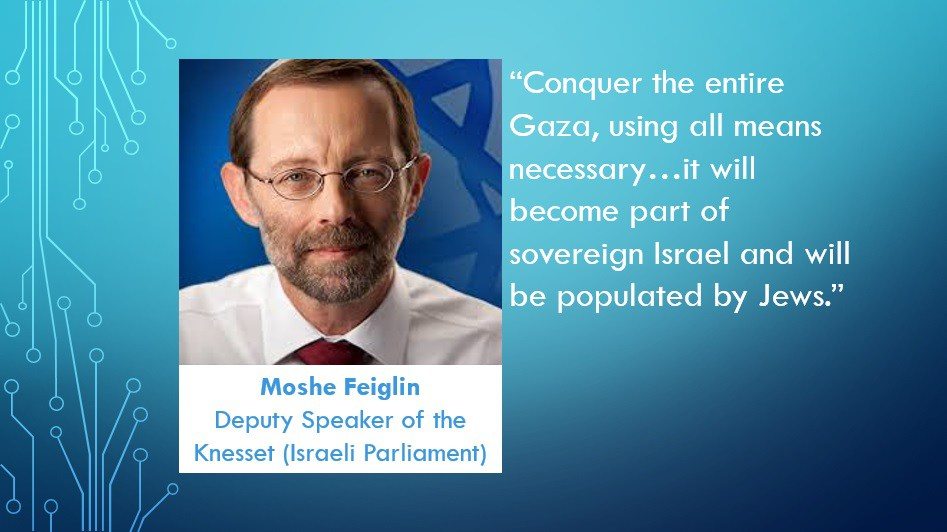 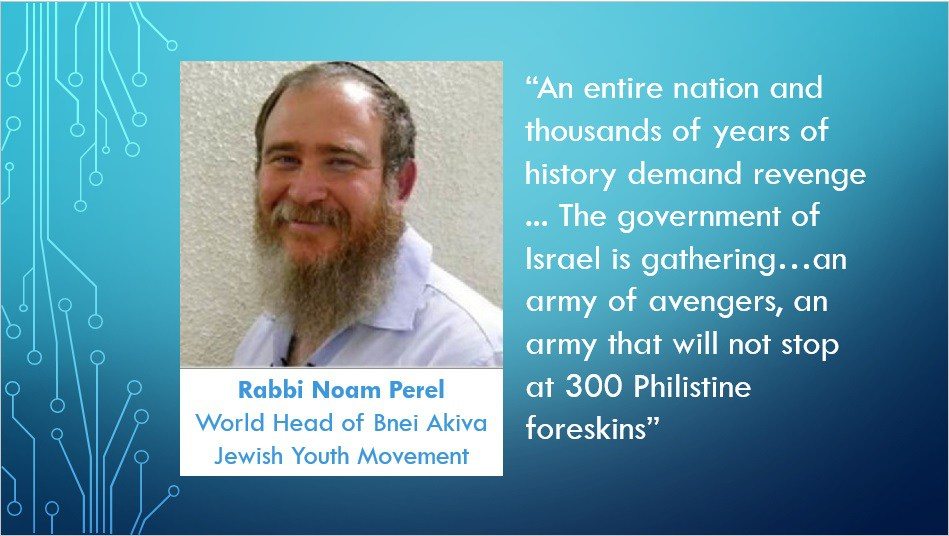 These are public figures, many on the public payroll, calling for the expulsion, harassment, torture and murder of civilians purely because of the ethnic group to which they belong. In fact, in March of this year, the current Chief Rabbi of Israel said in a sermon:

According to Jewish law, gentiles (non-Jews) should not live in the Land of Israel”

“If a gentile does not agree to take on the seven Noahide Laws, we should send him to Saudi Arabia. When the true and complete redemption arrives, that is what we will do.”

This incitement has become mainstream, as Jewish-Israeli journalist David Sheen laid out in testimony to the Russell Tribunal on Palestine below:

During 2014’s Operation Protective Edge, 327 Holocaust survivors and their descendants wrote an open letter to Israel calling its treatment of Palestinians by its proper name — genocide.

These people, who survived the worst nightmares of the Nazi regime, said clearly:

“Genocide begins with the silence of the world.

‘Never again’ must mean NEVER AGAIN FOR ANYONE!”

So how did Israelis react to this letter?  Here are just a sample of the responses from Jewish Israelis on Facebook:

In modern Israel, is is entirely socially acceptable to accuse Jewish anti-Zionists of being self-hating Jews worthy of the gas chambers of Nazi Germany.

Gaza versus the Warsaw Ghetto

Many of those who have learned this history of the Nazi holocaust in Germany, will be aware of the Warsaw ghetto. The United States Holocaust Memorial Museum described the ghetto like this:

On October 12, 1940, the Germans decreed the establishment of a ghetto in Warsaw. The decree required all Jewish residents of Warsaw to move into a designated area, which German authorities sealed off from the rest of the city in November 1940. The ghetto was enclosed by a wall that was over 10 feet high, topped with barbed wire, and closely guarded to prevent movement between the ghetto and the rest of Warsaw. The population of the ghetto, increased by Jews compelled to move in from nearby towns, was estimated to be over 400,000 Jews. German authorities forced ghetto residents to live in an area of 1.3 square miles, with an average of 7.2 persons per room.

Food allotments rationed to the ghetto by the German civilian authorities were not sufficient to sustain life. In 1941 the average Jew in the ghetto subsisted on 1,125 calories a day.

Between 1940 and mid-1942, 83,000 Jews died of starvation and disease. Widespread smuggling of food and medicines into the ghetto supplemented the miserable official allotments and kept the death rate from increasing still further.

Now we turn to modern day Gaza. The Gaza strip is a piece of land on the West coast of Israel-Palestine which Israel sealed off from the world in 2009. Israel built a giant perimeter wall around the Gaza Strip – stacked with machine gun turrets and a sophisticated checkpoint system – controlled by Israeli armed forces.

The 1.8 million inhabitants of Gaza remain locked behind this wall, sharing a space of just 139 square miles. The UN  describes Gaza as an “open-air prison“.

With the area sealed and entirely under Israeli control by land, sea and air – the Israeli government began its siege of the Gaza strip, restricting food and basic supplies. Food imports were restricted to allow the average Gazan to consume just 1200 calories per day.

The Israeli government denied this siege was happening for an entire 18 months, until internal documents on the maintenance of the siege were released by human rights organisation Gisha, whose director Sari Bashi said:

Instead of considering security concerns on the one hand, and the rights and needs of civilians living in Gaza on the other, Israel banned glucose for biscuits and the fuel needed for regular supply of electricity – paralyzing normal life in Gaza and impairing the moral character of the State of Israel. I am sorry to say that major elements of this policy are still in place.

The idea is to put the Palestinians on a diet, but not to make them die of hunger.

But Palestinians did starve, and freeze to death without the fuel to heat their homes through winter.

The impacts of this siege are real and devastating. As Norwegian doctor Mads Gilbert describes it, having supported Palestinian medical teams in Gaza for several decades:

As a result of the Israeli siege, there has been widespread development of anaemia among children and women due to malnutrition as a result of siege and poverty…(By) 2009, 31.4 percent under age two were stunted.

In other words, every third child is less developed than he or she should be. And stunting does not only affect growth. It also affects brain development and the ability to learn. This is a direct consequence of malnutrition. Remember, this is not caused by drought or natural disasters, but a deliberate, man-made lack of food and water, imposed, planned, and executed in the most detailed way by the Israeli government. They even calculate how many calories to let in to Gaza to avoid outright starvation but to “just” cause malnutrition since that goes under the radar of human rights abuses.

Similarly, water cleaning plants and pump stations for sewage cleaning and waste disposal are destroyed and haven’t been repaired because spare parts have not been let in due to the siege. Spare parts sit for up to two years on the border without being let in. Donated trucks from the UN and Japan for solid waste disposal are also being kept out.

Instead, 280 donkey cart drivers are commissioned to manually pick up the waste from the 600,000 inhabitants of Gaza City who should, of course, have a modern system. Plus, there is no fuel for the water pumping stations. The blackouts can last for 18 hours a day and the lack of fuel for running the water pump stations means that 50 percent of Gaza’s population receives water for only six to eight hours a day every fourth day.

So why won’t Israel let Palestinians have clean water and allow them to clean the wastewater? Why will they not allow them to collect their solid waste? Clearly Israel wants to make life as difficult as possible for the Palestinian community in order to break their resistance, to humiliate them, and to conquer them. It is not going to happen.

On top of this, Israel launches full scale military assaults on the Gaza strip intermittently. The most recent assault was Operation Protective Edge in the Summer of 2014, which I reported on from Gaza.

“The only possible reason for doing that is to kill a lot of people in as short a period of time as possible,” said a senior U.S. military officer at the time.

“It’s not mowing the lawn,” he added, referring to a popular IDF term for periodic military operations against Hamas in Gaza. “It’s removing the topsoil.”

Gaza is a modern day version of the Warsaw Ghetto – confined, deprived, and intermittently liquidated. It was unacceptable in the 20th century, and it is unacceptable now.

The harsh truth is this: those people turning their heads and disowning the rights of Palestinians today would have done exactly the same to European Jews during the Holocaust. They would have believed the propaganda, they would have absorbed and espoused the same bigotry, they would have tacitly or overtly gifted their complicity.

“Never again” means never again for anyone, or it means nothing.


B’Tselem – this Israeli human rights organisation does an inspirational job in researching the dark underbelly of the state and challenging it in the press, in the streets and in the courts.

International Jewish Anti Zionist Network – Jews across the world who are opposed to the ideology of Zionism and the violence of the Israeli state.

Palestine Solidarity Campaign – learn about the occupation and find ways of supporting its swift end.