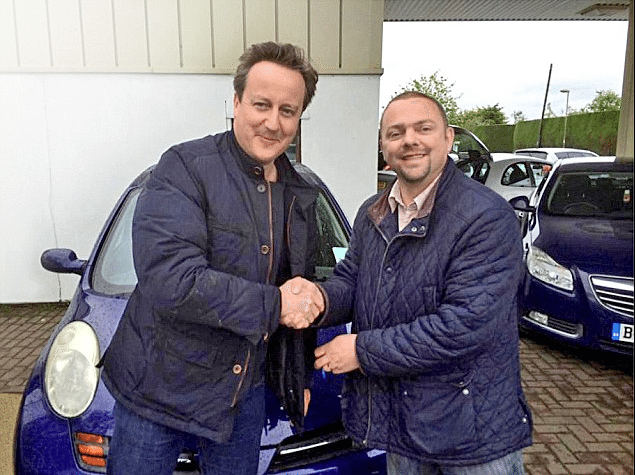 David Cameron’s latest attempt to convince British voters he is just a regular guy has backfired spectacularly. The bizarre publicity stunt took place at a used car dealership, and featured Cameron negotiating a deal to buy a second hand Nissan Micra for his wife.

Prime Minister David Cameron is a lineal descendant of King William IV, great grandson of a 1st Baronet, grandson of a 2nd baronet, son of a stockbroker and an aristocrat.  He was gifted with an Eton and Oxford education, and one might argue his career in politics, through sheer privilege of birth.  He enjoys the benefits of a family fortune made in tax havens.

Samantha Cameron is also a fully-fledged member of the British aristocracy. Her father is the 8th Baronet, Sir Reginald Sheffield – a landowner descended from King Charles II of England. She spent her childhood in the splendour of the family’s 300-acre estate in North Lincolnshire called Normanby Hall. The family also own a massive Yorkshire estate called Sutton Park.

It appears someone in Cameron’s PR team decided an element of ‘the common touch’ was needed, and this is what they came up with.

The Guardian devoted an entire, un-ironic page to detailing this fascinating and we are sure, entirely spontaneous move by the PM. It read:

When car dealership boss Iain Harris got the call from David Cameron’s security team that the prime minister was about to call in to buy a used blue Nissan Micra, he thought it was his mates winding him up.

Harris, owner of Witney Used Car Centre, said he was asked if he would mind staying open for an extra half an hour on Friday night so the prime minister could look over the secondhand car, which cost £1,495.

We find the article works best if you read it with the voice of Rob Brydon’s ‘uncle Bryn’ from Gavin and Stacey, enthusiastically reporting one of his charmingly pointless anecdotes.

If Mr Cameron was hoping to make a connection with the public with this weird stunt, he will be bitterly disappointed. Reactions ranged from anger, to hysterical laughter.

Such a blatant attempt to look like a 'man of the people'. A Micra with 92K on the clock, though? He saw you coming! https://t.co/SjS4F43biz

Turns out the Treasury produced manual for Mrs Cameron's Nissan Micra states that if you try to drive it out of the EU it will fall apart.

This was almost as embarrassing as when the Tory party suddenly all started declaring their love for pasties after the public furore over the pasty tax.