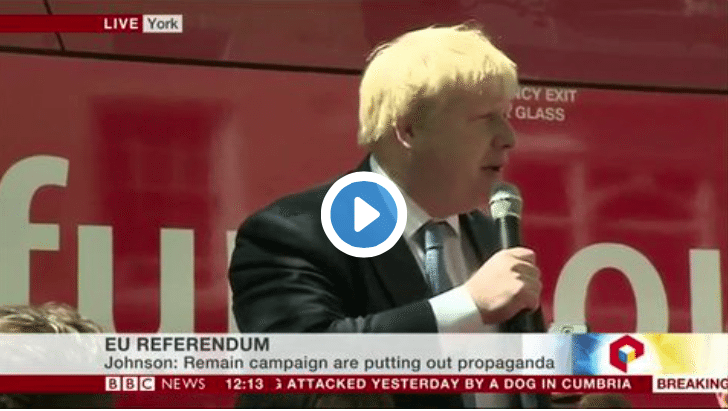 Boris Johnson suffered an embarrassing public meltdown over Brexit which has left the former Mayor of London red-faced.

During a speech delivered on Monday morning in York, Johnson appeared to forget his entire life history, and recast himself as some sort of ‘little guy’ in a struggle against ‘the man’. Johnson denounced the “fat cats” of the Remain side of the debate, who he says “know nothing of hospital waiting lists.”

There is little doubt that key figures on the Remain side of the debate live in a quite different Britain and EU than the majority of the population. But this is true of the Brexiter leadership too.

On the one hand, we have David Cameron. Prime Minister David Cameron is a lineal descendant of King William IV, great grandson of a 1st Baronet, grandson of a 2nd baronet, son of a stockbroker and an aristocrat.  He was gifted with an Eton and Oxford education, and one might argue his career in politics, through sheer privilege of birth.  He enjoys the benefits of a family fortune made in tax havens.

On the other, we have Alexander Boris de Pfeffel Johnson. Johnson is a descendant of King George II  and an eighth cousin of David Cameron. He was educated at Eton and Oxford, and refers to his £250,000 a year second salary for his column in The Daily Telegraph as “chicken feed.”

Even UKIP’s Nigel Farage, whose ‘bloke down the pub’ image has been meticulously contrived for maximum effect, is cut from the same cloth.

Farage is a millionaire banker, from millionaire banking lineage – his father Guy Oscar Justus Farage was a stockbroker. Far from working his way up from the bottom, the UKIP leader was educated at £10,000 a term private school Dulwich College.  He bombed out at 16, and used his father’s contacts to become a commodities trader in the City. New money of course, but he is one of those suited, champagne quaffing, morally bankrupt traders that helped bring our economy to its knees.

Indeed, this is one of the factors which has made the EU Referendum such a tough call for so many. It feels like this referendum is more about a dust up between the old school tie brigade, than it is about the future of our country, and the European Union.

This article was updated at 21.30 on 23/05. It previously referred to Boris Johnson’s second salary at The Spectator, where it should have said The Daily Telegraph.

Find out more about the EU Referendum on June 23 here.