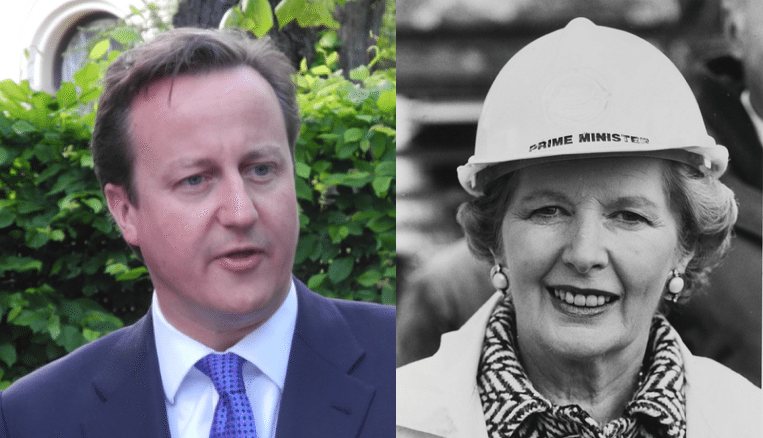 The gap between rich and poor in Britain has now grown to its widest since the 1930’s, according to a devastating report by The Equality Trust.

The report shows that Cameron is the Gary Lineker of this failed economic project, tapping the ball in from the 6 yard line, while former Prime Ministers Thatcher, Major, Blair, and Brown did the bulk of the work. The report states:

Since 1979 this process of narrowing inequality has reversed sharply. As shown in the graph below, inequality rose considerably over the 1980s, reaching a peak in 1990. 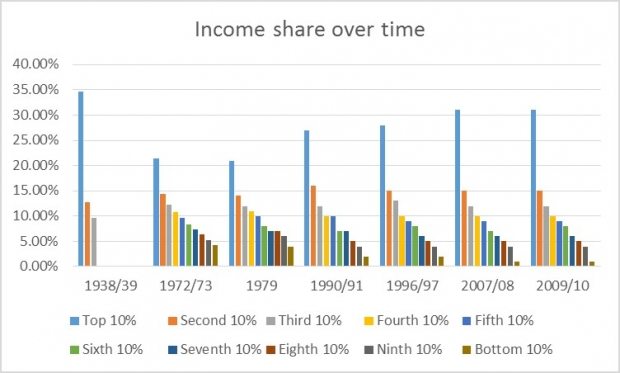 So, over the course of 30 years – the richest 10% in Britain went from holding around a fifth of all the income, up to nearly a third. At the same time, the share for the poorest 10% plummeted to one hundredth.

But why does inequality matter? So what if there’s a gap?

In The Spirit Level, Richard Wilkinson (Professor of Epidemiology at Nottingham University, UK) charts data that proves societies that are more equal are healthier, happier societies. By comparing life expectancies, mortality rates and other health indicators, Wilkinson demonstrated a correlation between inequality of income and inequality of health outcomes.

Wilkinson’s paper, and a replication of his findings by the Joseph Rowntree Foundation, characterised those outcomes as an inequality in life expectancy, rate of death and overall physical and mental health. Additional indicators of quality of life and social mobility, highlighted in both papers, were unequal outcomes in educational attainment, likelihood of conviction and incarceration for crimes, and an array of others, which might point to a causal link between inequality of income and inequality of outcomes.

Proving such a causal link is notoriously fraught with complexities and uncertainties, however, several studies have sought to assess the independent impact of inequality on health and social problems. One such study (Lynch et al, 1998) suggested that loss of life as a direct result of the impacts of income inequality in the US during 1990 was equal to the combined loss of life due to lung cancer, diabetes, motor vehicle accidents, HIV-related causes, suicide and homicide.

Economic inequality is also hereditary; a social inheritance passed from parent to child. Research by Gregory Clark of the University of California,  found data to suggest that in the same time frame we are discussing here (the 1979-present day period during which neoliberal economic policies expanded the economic inequality gap), the rate of social mobility (increased incomes and outcomes by successive generations) declined for the first time in 1000 years. Just stop to take that in for a moment. During all the economic systems deployed in Britain since the norman conquest of 1066, the rate of social mobility has been consistent at around 5%. Yet, for the very first time in that entire time frame, this system has kicked us backwards.

However, the issues of social mobility never were a great concern for the British aristocracy – and as they have made a resurgence in political power over that time, we shouldn’t expect change to come from them.

Prime Minister David Cameron is a lineal descendant of King William IV, great grandson of a 1st Baronet, grandson of a 2nd baronet, son of a stockbroker and an aristocrat.  He was gifted with an Eton and Oxford education, and one might argue his career in politics, through sheer privilege of birth.  He enjoys the benefits of a family fortune made in tax havens.

His likely successor, Alexander Boris de Pfeffel Johnson, is Cameron’s 8th cousin, and a descendant of King George II. He was also educated at Eton and Oxford, and refers to his £250,000 a year second salary for his column in The Spectator as “chicken feed.”

Even UKIP’s Nigel Farage, whose ‘bloke down the pub’ image has been meticulously contrived for maximum effect, is cut from the same cloth.

Farage is a millionaire banker, from millionaire banking lineage – his father Guy Oscar Justus Farage was a stockbroker. Far from working his way up from the bottom, the UKIP leader was educated at £10,000 a term private school Dulwich College.  He bombed out at 16, and used his father’s contacts to become a commodities trader in the City. New money of course, but he is one of those suited, champagne quaffing, morally bankrupt traders that helped bring our economy to its knees.

The British right is now dominated, as it was historically, by aristocrats and plutocrats – acting in their own interests.

Meanwhile, for everyone outside the economic elite, the rising economic inequality means rising inequality of health and wellbeing; and their inherited disadvantage is proving a barrier to improving not only their circumstances, but those of generations to come.

Support the work of UK Uncut, to create a decent tax system.