Whether we vote to Leave or Remain, we cannot ignore what just happened in Europe - Canary 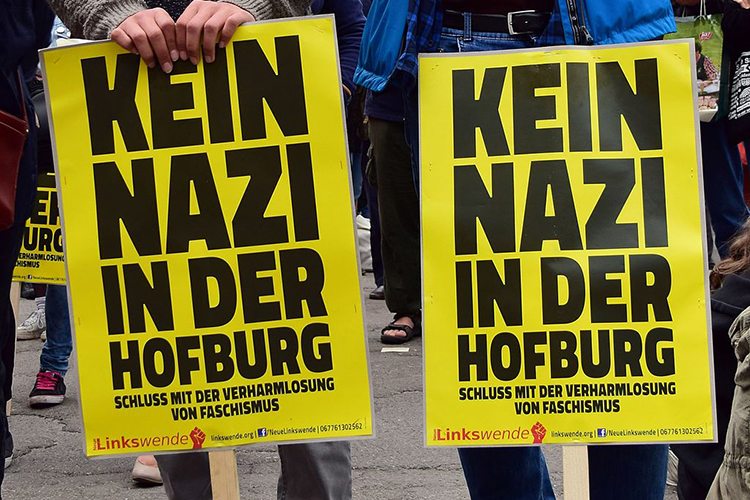 Austria’s far-right Freedom Party candidate Norbert Hofer has just lost their presidential election by just 0.4%. Awaiting the final postal votes after a 50% exit poll tie, political pundits were predicting that Hofer would be the first far-right leader to gain power since the EU was formed. Nonetheless, Hofer is just the latest of several far-right candidates to gain serious traction all over the continent after the financial and refugee crises hit the Eurozone. This is becoming so prevalent it is being called Europe’s ‘rise of the far-right‘.

Should we be worried about the Austrian election results? In short, yes. Though the ‘largely ceremonial‘ position of Austrian President has little impact on governance in Europe, we must focus on the realities behind this phenomenon. Hofer’s near-election cements a new apex in Europe’s swing toward authoritarianism, and it’s worth asking why that is.

Both Hofer and the winning candidate Alexander Van der Bellen are anti-establishment, though with very different stances on immigration and economics, and representative of a far wider populist momentum in Western politics. Donald Trump and Bernie Sanders are indicative of this too, as were the 2015 surges of both UKIP and the Green Party in the UK.

Populism in itself isn’t a bad thing, but in Europe – and further afield with candidates like Trump – it is increasingly being used to divide and conquer rather than promote unity, cohesion and economic and social reforms.

The subject of Novara Media’s latest podcast, populism is described as “what the other guy does”. It is often a slur used to exclude those who are “ideologically distinct” from those in power, and is “rooted in popular anger”. It’s not enough to ‘accuse’ Hofer, Trump, Farage, or Van der Bellen of simply being populist, as though their diversion from the mainstream renders them useless. Instead, we should analyse why their message resonates with so many and evaluate how the actions arising from their message will help, or damage, different groups in society.

Small, symbolic victories on the far-right may spell a boost in momentum for candidates like Marine Le Pen in France and Geert Wilder in the Netherlands – candidates who have already made significant gains and hold much more weight in European politics. In Eastern Europe, too, Slovakia and Hungary have seen far-right gains.

Little is being reported about Van der Bellen’s politics other than his pro-EU, pro-refugee stance, and his history as leader of Austria’s Green Party. But it’s safe to say he’s a more progressive candidate than the “Austrian Donald Trump“. Comparing Hofer to that other most famous far-right Austrian(-born) leader without context may appear to amount to laziness and scaremongering, but plenty of people are doing so and backing it up with convincing insights. Hofer genuinely casts similar shadows – a “soft-spoken” man who has been seen wearing the blue cornflower, described in The Telegraph as:

an old clandestine Nazi symbol that harks back to ideas of pan-Germanism, the nineteenth century idea of a ‘greater Germany’ that ultimately inspired Hitler’s foreign policy and the annexations and invasions that triggered the Second World War.

What this rise of anti-establishment characters means for the future of the EU is uncertain. Britain’s vote to leave or remain is hotly contested, and this development only heightens an already tense and abused issue. On the left, the arguments for both Brexit and In are in large part to do with the effect it will have on the neoliberal, centre-right governance of Britain which will exist nonetheless. Either in the remaining four years of a Conservative government or the continuation of governance under the EU.

Though we might want to believe that we have learned the lessons of history and ‘never again’ will we see the horrors of the past, the threat to international unity and advancement must be taken seriously. We cannot ignore the rise of insular attitudes and persecution in Europe, nor in Britain. Unfortunately, with the ‘unheard third‘ of the British public absent from the 2015 general elections, some are so clearly (and understandably) disillusioned with the status quo that they refuse to participate altogether.

The scaremongering of the EU referendum debate from both sides hasn’t helped the issue of political resignation. The reason it’s confusing is that no one actually knows what the outcome of either result would be. The devil will be in the detail of the deals we make with the EU whether or not we remain a part of it.

The populist issues at hand – for example nationalism, immigration, economic precarity, NHS funding – are not issues that will be solved by one referendum or national election. They will be negotiated for better or worse as part of larger, longer grassroots movements, media coverage, and public funding. These are battles fought continuously by the public at large, across a spectrum of all nations, belief systems, and economic backgrounds. However, these movements influence party politics, and so support for progressive candidates could have a real impact on transforming policy and legislation. Whatever vote we cast or battle we engage with, we must pay attention to both the local and global pictures.

Get involved with Stand Up To Racism.