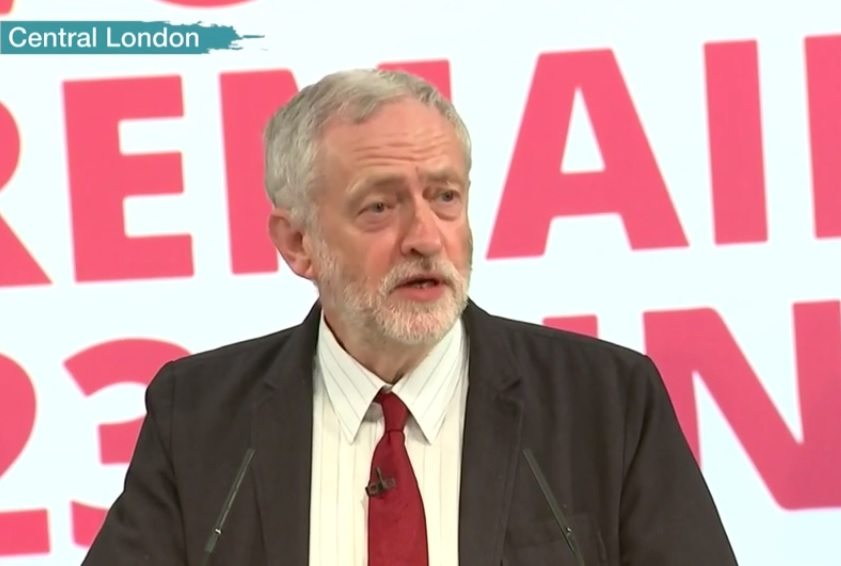 On 2nd June Jeremy Corbyn gave a speech on the upcoming EU referendum. Following the Labour leader making his case for staying in the EU, he was questioned by the media. One of the journalists asked why Corbyn has remained largely ‘silent’ in the Brexit debate so far. He answered:

It’s partly down to the media and how they report

Media reporting holds a huge sway over public understanding, and they have largely ignored the Labour leadership’s efforts, including those of Shadow Chancellor John McDonnell, to make Labour’s case for staying in Europe. They have, however, continually rolled out the trope that Corbyn isn’t ‘doing enough‘.

So, if there’s anyone to blame for Corbyn’s ‘silence’ it’s the gatekeepers of public opinion, and whether they are covering what he’s saying.

Corbyn’s supposedly muted involvement in the Remain campaign was also a focus of Question Time that same day. An audience member asked:

With his half hearted support for Remain is Jeremy Corbyn secretly hinting to the British people that we should leave?

Panelist Owen Jones countered this assertion, and drew his aim firmly at the media:

He did a speech today and the only thing the press spoke about that speech and its contents was the fact people heckled at it, when a BBC reporter spoke, rather than talking about what he said.

The ‘heckling’ he was referring to was the audience’s response to Laura Kuenssberg asking a question after Corbyn’s speech, which became quite the excessive talk of the media town.

This is right on the money. It’s difficult to look through any reporting on the EU referendum without coming across references to the ‘war‘ within the Conservative party, and mud slinging from both sides. But, these personal conflicts – combined with incredibly dramatic claims such as that Brexit would bring “world war three” and that the EU is “pursuing a similiar goal to Hitler” – has made it difficult for the media to resist focusing on these figures in the debate.

However, these are exactly the people that the Labour leadership have refused to share a platform with in the campaign. The decision to reject uniting with the Tories is in part based on the fact that the reasons for each party wanting to stay in Europe are quite different. Plus, Corbyn is also trying to learn the devastating lesson of what it cost the party in votes when they joined forces with the Conservatives during the Scottish referendum.

Instead of getting down in the dirt with the degrading campaigning that currently consumes the media’s pages, he has been pounding the streets. As he said after his speech:

Last week I was in Yorkshire, we had a public meeting on the streets of Doncaster, I’ve been in Liverpool, I’ve been all over the country. Tomorrow I’m going to Cardiff, on Saturday I’m going to Truro, there are no no-go areas for our party.

This sort of campaigning did Corbyn very well in the Labour leadership campaign. So we could find that his views are being heard more than the media would have us think.

Just in case you’ve missed it, here is the Labour case for staying in the EU. And it’s loud and clear:

Watch the debates on EU membership from the 28 May event Another Europe is Possible.