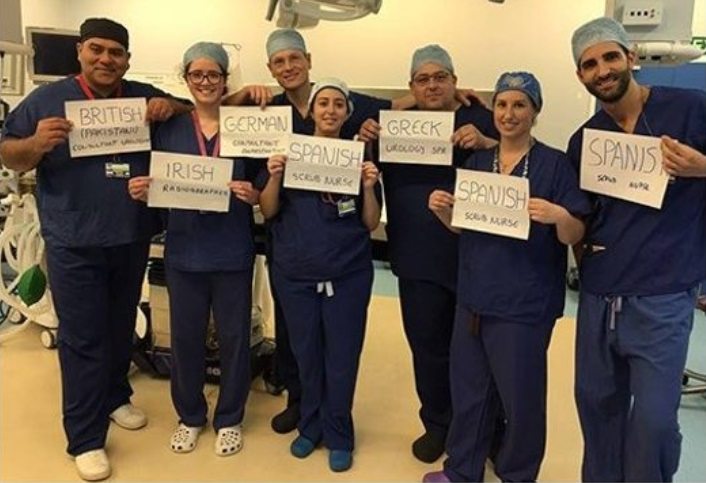 Health leaders have warned that Brexit could deepen the already severe staff shortages in the NHS. Currently, 10% of doctors, 5% of nurses and around 5% of care workers are from the EU.

Amid concerns about whether EU workers will be allowed to stay in the UK, there is the additional worry that the fallen value of the pound will put European clinical staff off coming to work in the NHS. A report out earlier this year suggests that the NHS is already short of around 50,000 clinical staff (out of 800,000).

Additionally, many people, including doctors, have reported that they feel unwelcome in the UK following the referendum. Racist and xenophobic incidents have risen since the vote.

Now politicians from across the spectrum have written to David Cameron calling for him to:

Make an unequivocal statement that EU migrants currently living in the UK are welcome here, and that changes would apply only to new migrants. A clear commitment to protect the status of EU migrants was made by the official Vote Leave campaign – and it must be honoured.

But Theresa May, the current front-runner to become Prime Minister in September, has hinted that EU citizens already living here will not automatically have the right to stay. David Cameron’s lukewarm statement that there will be “no immediate changes” for EU citizens living in the UK has hardly been reassuring. While it’s not yet clear what the future holds, messages of support are flooding in.

On social media, the #LoveOurEUStaff campaign has highlighted the huge value of EU staff and thanked people for their contribution to the health service.

The trending picture that has been shared a thousand times …
An #NHS surgical team.#LoveOurEUStaff pic.twitter.com/f914NZ4NRG

We are one profession, we stand by every single one of our colleagues, and we know that the National Health Service is enriched by the contribution of doctors from every country in the world.

Dr Porter has also called for an end to the NHS being used as a political football.

Leave campaigners backtracked on a pledge to give the NHS £350 million a week just one day after the referendum result, calling it a ‘mistake’. Now Michael Gove has pledged £100m million a week for the service as part of his bid to become Prime Minister. Health leaders are, unsurprisingly, sceptical. Dr Porter said:

There is a clear public appetite for extra NHS funding, but this shouldn’t be used as a false bribe to attract voters.

We must also be clear that even £100m per week would fill less than a quarter of the funding shortfall created by the Government.

The next prime minister must outline a clear and achievable plan to support the NHS and deliver on any promises made on NHS funding.

In the wake of last week’s vote they must also provide clarity and reassurance for the many thousands of EU citizens working in the health service, without whom the NHS could not survive.

With the NHS already under huge pressure from increasing demands and budget cuts, the value of EU staff should not be underestimated.

Take part in the Save Our NHS Campaign