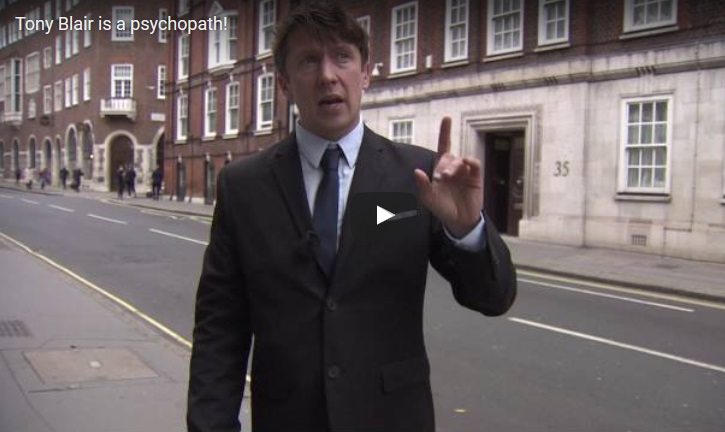 At the end of May, Tony Blair argued that a government led by Jeremy Corbyn would be a “dangerous experiment”. But with the former prime minister’s own destructive record set to be judged this week with the release of the Chilcot inquiry into the invasion of Iraq, the irony of such a statement has been lost on no-one. In particular, it’s well worth watching the poignant points made about Blair recently by parody newsreader Jonathan Pie.

Pie begins with a response to Blair’s concerns about Corbyn, asking:

What’s more dangerous? Having a socialist in charge of a supposedly socialist party? Or lying to the public and taking the country to a catastrophic war in the Middle East?

Calling the ex-PM a “sociopath” and a liar, Pie continues:

And then, then he leaves office and literally makes millions of pounds by becoming a ‘peace envoy’ to the Middle East. I mean the man is either a psychopath or a comedy genius.

Pointing out that an enduring part of Blair’s legacy was turning Labour into a right-wing organisation, he makes the point that Jeremy Corbyn is currently “a left-wing leader of a right-wing party”. (This internal conflict has indeed become much clearer with the recent parliamentary coup against Corbyn.)

All of Pie’s comments are very relevant when we consider the credibility (or lack thereof) of Tony Blair, the upcoming Chilcot report, and the right-wing manoeuvres in the Labour party against Jeremy Corbyn.

And if the Chilcot inquiry is the whitewash that some fear it will be, Pie reminds viewers of Blair’s self-proclaimed Catholic beliefs, saying:

the good news is that, according to his faith, he is definitely going straight to hell

See the full video below: