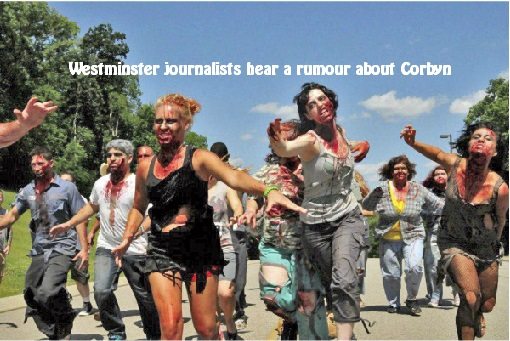 The last 10 days have not only exposed the shambolic state of UK politics (or at least, English politics), but also the dire state of UK mainstream media. But on Monday night, there was a moment that summed up just how ludicrous things have become.

Throughout the #ChickenCoup of Blairite Labour MPs revolting against the left-wing leadership and membership of the party, mainstream media journalists have been responsible for amplifying gossip, lies and rumour – and repackaging it as credible information.

On Monday night, they were caught out spectacularly, when Huffington Post Political Editor Paul Waugh made claims that a Corbyn ally was ‘nodding along’ to Neil Kinnock speaking against the Labour leader. Reading the tweet, you would assume Waugh was in the room, watching events unfold and reporting them as they happened. Except he wasn’t.

Sorry @paulwaugh you are not in the room and your information is wrong.

So where did Waugh get this information from, if he wasn’t in the room? 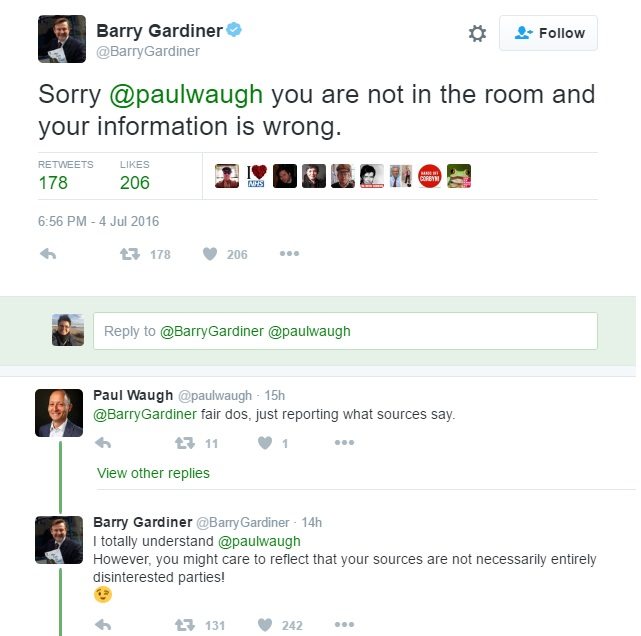 Waugh was simply passing on gossip.

The moment was caught by Twitter users, who took their chance to call ‘bullsh*t’ when they saw it – pointing to a whole string of falsehoods perpetrated (and later quietly recanted) in recent days.

What’s worse, is that Waugh is far from alone – and far from the worst. That crown goes to a chap called George Eaton, Political Editor of the New Statesman who seems to have abandoned journalism entirely. Instead, as his Twitter account testifies, he seems simply to loiter in Westminster bars retweeting any old piece of gossip he overhears as if it were a Walter Cronkite-style scoop.

Just one example was the Tom Watson debacle.

Labour MPs tell me that they expect Tom Watson to tell Corbyn that he should resign.

This never happened. However, the BBC picked up the story and ran with it, alongside much of the mainstream media. Retractions came later.

Eaton was also the muckspreader-in-chief of the false allegation that Corbyn had voted to leave the EU.

Except those papers never came. This was all, again, just gossip.

One Twitter user kindly provided a list of 8 such moments from the week, which sum up the sloppiness and bias being applied by our mainstream political journalists.

why do these ppl keep doing that? pic.twitter.com/FNpmPhWwLs

But thankfully, there is an increasing awareness, and rising contempt, for this ‘boy’s club’ school of journalism.

what happened to the one about your proof Corbyn voted Leave? Sorry I know we're meant not to question and all that.

All this might be funny, if there weren’t such great issues at stake.

The role of these Westminster-based lobby journalists should be to act as a filter, sifting through the detritus churned out by the rumour mill, to find nuggets of truth to share with the public.

They should be taking the time, and exhibiting the editorial maturity and patience, to research the credibility of their sources and the information they present.

The whole thing is reminiscent of the annual Gloucestershire cheese roll. Every year, they hold this competition where a ball of cheese is flung down Cooper’s Hill, for the villagers to chase after. They go careering hell for leather down the hill, falling over themselves, each other, breaking bones. This seems to be basically the same principles applied by our mainstream media in chasing Westminster gossip.

It’s times like this the public needs a media it can count on: a Fourth Estate holding power to account, fact-checking the Westminster whispers and exposing the whisperers. Instead, they are in cahoots. This slapdash, Twitterati generation of mainstream hacks have have reduced our media to a flock of rabid seagulls regurgitating gossip into the mouths of their readers. It is lazy, cynical and an absolute dereliction of duty.

At the same time, incredible new media organisations like Novara Media, Media Diversified, Media Lens, CommonSpace, Bella Caledonia, Real Media and many others are taking the fight to the establishment. They have been ably assisted by an array of skilled and committed bloggers like Vox Political, Another Angry Voice, Pride’s Purge and Politics and Insights (Kitty S Jones) to name but a few.

The established media and certain members of the political class are now engaged in attempts to undermine those efforts. But we expected this. We brought the fight to them. And this fight is bigger than pitch forks, witch hunts and personal attacks.

We are as flawed and imperfect as any group of individuals. But someone needs to start this fight, and those who are, have seen their work rewarded with millions of new, switched on, and passionate readers. As I have said before, it has felt as if during the last decade, we have all been witnessing the demise of politics, the welfare state, the NHS and the media in gradually escalating horror. We have been looking over our shoulder to the hills, asking: ‘Where is the cavalry?’

Featured Image via The Columbus Dispatch