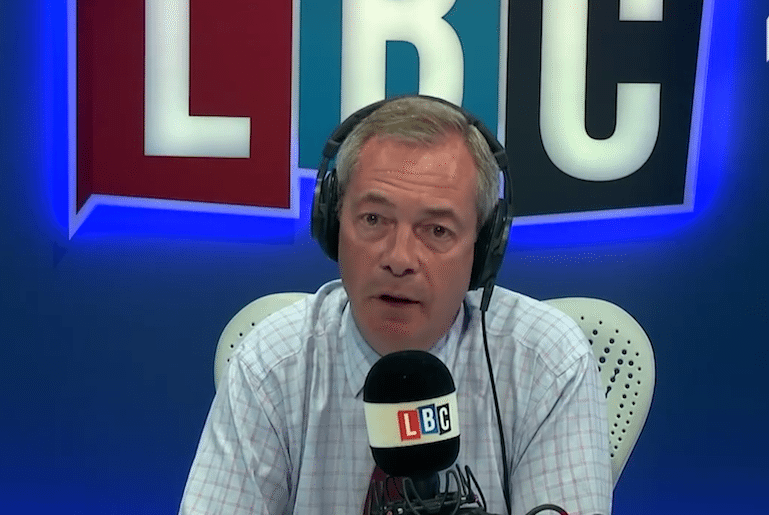 Nigel Farage crashed and burned on live radio on Sunday when a caller to his weekly phone-in show set him a beautifully laid trap – and Farage walked straight into it. Here, the caller tells The Canary why he felt compelled to hold Nigel Farage to account.

When Richard from Pembrokeshire called into Nigel Farage’s LBC radio show on Sunday, Farage must have thought all his Christmases had come at once. Richard started his call by telling Farage:

One of my big concerns is people coming to the country and not actually learning English. I don’t see how you can integrate if you don’t speak the language of the country.

The video of the interview shows Farage growing instantly animated, nodding along as Richard spoke and barely able to hold himself back from interrupting him in agreement:

I couldn’t agree with you more… I think you’re right, and I think that the language is absolutely fundamental…

But as soon as Farage had walked into the trap, Richard asked:

I was wondering why you’ve spent more than 20 years living in Belgium, and yet you don’t speak a word of Flemish, German or French?

Farage first tried to brazen out the accusation with a question: “how do you know that?” When Richard referred to media reports that Farage had to communicate with a French mechanic in sign language, Farage fell back on his usual fact-free nod and a wink:

Unfortunately for Farage, Richard is something of an expert on Ukip. He told The Canary:

I’ve spent some years now studying Ukip because I think they’re a very dangerous and divisive force in British society… I think he gets such an easy ride every time he’s on television. He never gets questioned properly like I did yesterday. [There are] so many things which he could be pulled up on, so many lies, which are blatantly obvious lies, that he’s told. So I thought I’d bring a couple up…

About four years ago, somebody sent me a copy of a bill [from a restaurant in Strasbourg Farage used to go to]. Château Margaux was the drink of choice and it was a hundred and something pounds then. Pate foie de gras was the favourite starter. And they were drinking it by the caseful, it wasn’t just a bottle or two – they were guzzling it like cheap beer or something. And after dinner, they were all having really old Armagnac and Cognac at £30 a shot. So this really doesn’t fit in with his beer-drinking, man of the people, bloke in the pub type thing at all.

So Richard mentioned the Chateau Margaux live on air, leaving Farage with nowhere to go:

Now Richard Day, 62, has spoken to The Canary about why he decided to call Nigel Farage out on live radio:

There was a time in British politics where if a politician got caught out in a blatant lie, he’d have to what they call ‘reconsider his position’. In other words, resign. But Farage has told so many lies and they let him get away with it all the time.

We shouldn’t allow our politicians to do that. Maybe that’s an old-fashioned thing but we really shouldn’t. Last year he said there was a shortage of retroviral drugs for HIV/AIDS. A National Health spokesman came out the next day and said there is no such shortage. Last year when he said he couldn’t get to a meeting in Wales because the road was clogged with immigrants, well, the police and the motoring organisations said there was no traffic hold-up on the road at that time.

There’s a huge list of his lies – a huge list – and yet 3.88 million people voted for the plonker.

But it’s his dangerous rhetoric around immigration that upsets Richard the most:

It’s his form of dog whistle politics that I find so disgusting. He knows when there’s 29 million Romanians [who he] then whispers “might come” [to the UK], he knows how his supporters will take these sorts of things…

What he’s done is stirred up this thing which had been lying dormant. People believed it had gone away, but it hadn’t gone away – it was just being quiet. And he’s made it acceptable now to say disgusting things. Race hatred. He’s made it acceptable to do that. And that’s a dreadful thing. Since the referendum now there’s been an enormous rise in hate crimes, 50 to 60%. And that’s on his hands.

Richard, who left school at 15 with no qualifications, has travelled widely and speaks several languages:

My French is quite good. My Dutch is quite good. I can get by in half a dozen other languages… And here’s this bloke, [who went to a] £30,000 private school, who only speaks bloody English. But it’s not because of his intelligence – it’s just because he doesn’t like foreign!

Just days ago, my colleague Emily Apple reported that Farage continues to claim his massive EU salary despite resigning as Ukip’s leader. She wrote: “He is proving to be the very essence of everything he claims to hate about Europe – a lazy, worthless bureaucrat, sponging money out of the institution he claims to despise”.