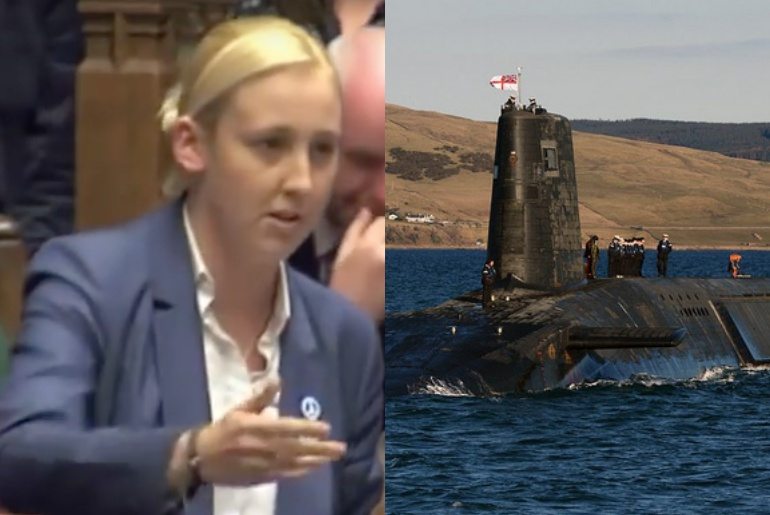 The UK’s youngest MP, Mhairi Black, demolished the arguments for renewing trident during a four-minute speech in parliament.

Black, the SNP MP for Paisley and Renfrewshire South, spoke passionately to a disgustingly empty chamber, as MPs debated whether they should renew the trident nuclear missile capability. Including upkeep, trident is set to cost, according to the Campaign for Nuclear Disarmament, £205 bn.

Her speech started by slamming the opposition for thinking that the SNP had “romanticised reasons” for wanting to scrap trident, when if fact the reasons were “very logical”. Black then proceeded to set out these “very logical reasons”:

Firstly, she laid into the fact that the government has admitted that they will never fire this weapon first. Black does not mince her words:

So, the only time we are saying that we will use this weapon is if someone has a nuclear strike against us. And to be quite frank, that means we’re all dead anyway and if we’re dying, I don’t care if we’re sending one back or not. I’m more worried about the one coming towards me.

This, in a nutshell, is one of the reasons why trident is so ludicrous. The only time this country would use it would be as revenge – and in which case, as Black points out, we would all be dead anyway.

However, even if maintaining and renewing trident is a deterrent, what is it that we’re deterring? As Black points out, the tier 1 threats set out by the National Security Strategy 2015 (pdf) do not include a nuclear threat. However, they do include terrorism, cyber threats, public health risks, and severe weather and major flooding. As Black points out:

What terrorist attack have nuclear weapons protected us from? Protected France from? Zero. They’ve got hee-haw to do with climate change or to do with cyber crime.

Black then demolishes the argument regarding the nuclear industry providing jobs:

Yes, we have skilled engineers, scientists and workers that work very very hard and are very very talented. But why don’t we use the billions of pounds that we’re proposing to spend on this to invest in our energy sectors, and our engineering sectors. Why don’t we actually use them in the renewable energy sectors as, in actual fact, climate change is a tier 1 threat to us. So why don’t we spend that money trying to tackle that.

Unfortunately, May has already shown her attitude towards climate change. Going even further than Cameron who slashed funding for renewable energy subsidies, May has abolished the department for climate change. This is obviously one very real threat to the country which she is not prepared to engage or spend money on.

Black then turns to the massive cuts and “difficult choices” the government claims it has had to make on austerity:

According to the Campaign for Nuclear Disarmament, the cost of trident would:

be enough to improve the NHS by building 120 state of the art hospitals and employing 150,000 new nurses, build 3 million affordable homes, install solar panels in every home in the UK or pay the tuition fees for 8 million students.

This should not be a difficult decision. This obscene amount of money, which is being wasted on a weapon that would only be deployed if we were attacked, would be far better employed ensuring we have decent public services or affordable homes.

However, Black’s most damning appraisal about trident is reserved for the real reasons behind the project:

The fact of the matter is weapons serve no other purpose than to satisfy the ego of the British establishment. This is about us putting our stamp on a world that we are isolating ourselves from more and more.

And for what? It’s to preserve Westminster’s self indulgent image of importance. This is all part of the government’s long term economic sham. That’s what this is.

Black is right. Trident renewal has everything to do with the “ego” of Westminster politicians who want to appear important on a world stage that they are currently in the process of separating themselves from. It is also, as my colleague Steve Topple has pointed out, a massive fundraiser for arms companies and banks.

Keeping and renewing trident is a ridiculous waste of money on a disgusting weapon – a weapon whose only purpose is to kill many thousands of people in revenge. Meanwhile, the real threat of climate change is ignored.

One can only presume that renewable energy is not nearly as profitable for politicians as weapons of mass destruction.

Get involved with Trident Ploughshares and take action.

Join CND and say no to nuclear weapons.