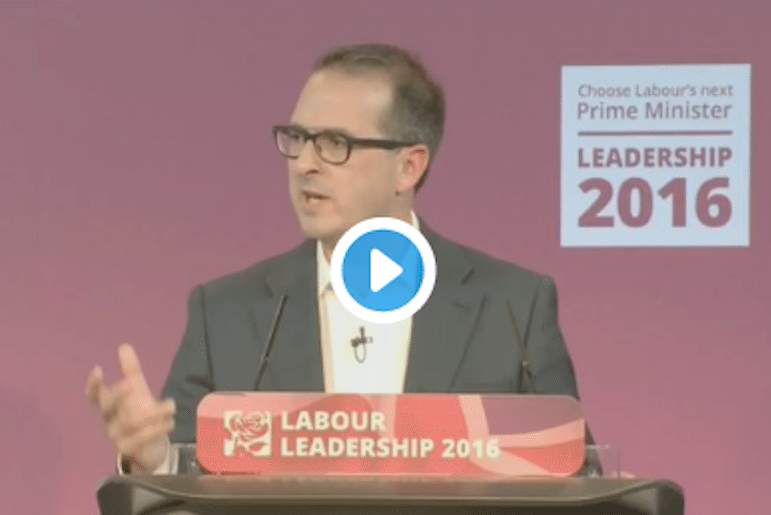 In footage from the event shared over Twitter, Smith can be seen saying:

…consider the issue of terrorism: I’d invest in our communities. The Prevent strategy, that is grossly undermined and under-resourced in this country, ought to be at the forefront of Labour’s policy, making sure we foster better community relations in Britain.

A suggestion to prioritise Prevent in Labour policy will come as a shock to the Muslims, teachers, student unions, and human rights groups which have spoken out against the policy in the past.

The Prevent strategy was developed as part of the government’s response to terrorism. It focuses on identifying risks of radicalisation early, and has been introduced to schools and NHS services across the country.

It has been met with criticism from all sides.

Prevent requires teachers to report pupils who they suspect of engaging in terrorist activity or radical behaviour, or who are at risk of being exposed to it. At the National Union of Teachers annual conference earlier this year, teachers voted overwhelmingly to call for it to be scrapped, claiming it caused “suspicion in the classroom”.

In 2015, the National Union of Students (NUS) also called for a boycott, refusing to work alongside it.

Even the UN has passed judgement, with the special rapporteur on the right to freedom of assembly, Maina Kiai, stating that:

By dividing, stigmatising and alienating segments of the population, Prevent could end up promoting extremism, rather than countering it.

An article on the Huffington Post today by Ali Milani adds to this, citing the example of a student at Staffordshire University on a Terrorism, Crime and Global Security course who was reported for being “Asian and with a beard” while reading a book on terrorism in the library.

These authorities can then question friends and family, seize any and all academic work by the suspected student, as well as monitor and investigate other aspects of their public and private lives.

It is for this reason that many Muslim people have spoken out against it and the fear it has generated among Muslim parents and their children.

So Smith’s assertion that Prevent should receive more funding and a place of prominence in Labour policy is a surprise. Given that so many others have called for it to be scrapped, and that 90% of referrals lead to no action at all, it is hard not to view this as yet another example of him being out of touch with those he seeks to represent. And it’s unlikely to help his chances of winning the leadership election in any way at all.