In less than a minute, Corbyn proves he knows how to fix the mental health crisis [VIDEO] - Canary 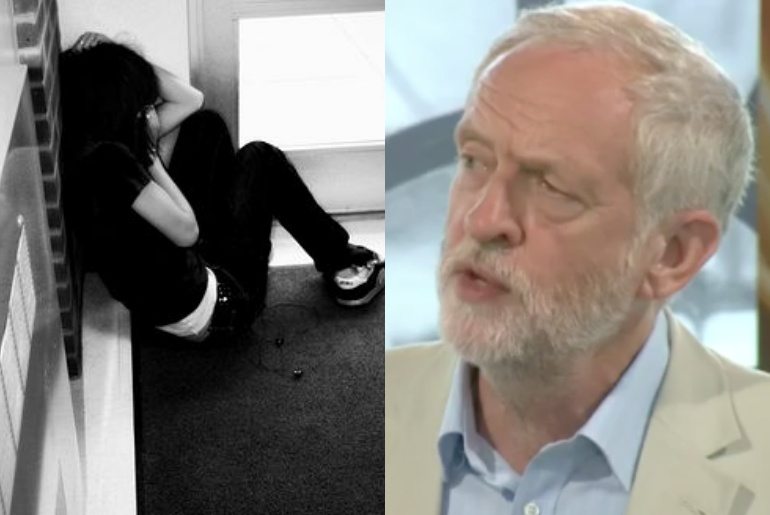 Jeremy Corbyn nailed the mental health crisis and what we need to do about it on 17 August. He and Owen Smith were taking part in the Victoria Derbyshire Labour leadership debate. Not only did he recognise the crisis which is currently engulfing mental health services, but he also acknowledged that there has to be recognition of the role poverty and inequality can play in poor mental health.

What would Corbyn & Smith do on mental health. Investment is key says Smith. Change in attitude crucial, adds Corbyn https://t.co/GpQuqDYczf

During the debate, the two leadership contenders were asked the following question by an audience member:

I see the mental health services of this country, particularly for young people like me, have been constantly degraded by this Conservative government. They’re getting worse and worse. Young people are having to wait six months/a year for a mental health appointment that could be the difference. And I want to ask, how are you going to make it any better, both of you? If either of you are Prime Minister, how would you sort out the mess that is mental health in this country?

Smith answered first. He responded personally by talking about a recent mental health crisis faced by his brother:

Well, I saw this first hand just a couple of weeks ago when my brother was admitted to an NHS hospital for a week with an issue around mental health and I saw what an incredible Cinderella service it is – people bounced back and forth.

But he failed to show any deep understanding in his answer, especially about the particular problems with mental health care and how to solve them. Instead, he relied on talking about investment. And other than mentioning a new hospital in Wales, he didn’t specify how this funding would be used to help solve the crisis:

I’d invest. I think very simply we need to invest an extra 4% per annum in the NHS, an extra £60 billion. We were actually in Wales and I was going to a brand new mental health hospital at Llandough in Cardiff built by the Welsh Labour government because we are still investing in our NHS in Wales.

Instead of addressing the particular needs of mental healthcare, Smith carried on speaking about the NHS in general terms:

So the evidence is there, we can invest in mental health. My grandmother is in an NHS hospital even as we speak. We all know it’s vital. We just need to invest and we need to say where the money’s coming from in order to do that.

Smith is right in one sense. Investment in the NHS is desperately needed. But additional money isn’t enough. There needs to be a clear plan for how that money is going to be spent to improve services and how to benefit those in need. Corbyn answered these points in three simple statements.

We do face a mental health crisis in this country. One in four of us are going to face a crisis during our own lifetimes. We can do two things. One is change our language and change our approach and change our attitudes so that young people don’t suffer in silence and fear of talking about it, and sadly some even take their own lives as a result of it. We can do a lot in that respect.

Current attitudes towards people with mental health problems can add to the problems they face, and make it harder to access help. According to the charity Time to Change, there are still very negative connotations connected to poor mental health:

Yet mental illness is still surrounded by prejudice, ignorance and fear. The attitudes people have towards those of us with mental health problems mean it is harder for them to work, make friends and in short, live a normal life.

This stigma is enhanced by the mass media portrayal of tragic incidents. Like the death of MP Jo Cox, where phrases such as “crazed loner” dominated media coverage. Accessing psychotherapy and taking medication were lumped together with a propensity for violent crime. And it is this type of language and attitude that desperately needs to change if we want to start unpacking the stigma.

Secondly, Corbyn addressed the immediacy with which people need to be able to access treatment:

Secondly, absolutely invest in good quality, immediate talking therapies and support for those going through a crisis. If you’ve gone through, or are in the midst of a crisis, and you go to your GP, and you say ‘I’m going through a mental health crisis’, a good GP would do something for you immediately. A less effective GP would, say, put you on a waiting list for talking therapy in a month’s time or seeing a psychiatrist in six weeks’ time or something like that. It’s got to be there and available and immediate.

This point is crucial. People need to be able to access therapy immediately. Not only is this vital to their well-being, it can save lives and stop problems escalating. This is particularly true with children and young people, with 75% of mental health problems beginning in childhood.

In Wales, there is a crisis in mental health, even though Smith is very proud that Labour is still investing in the NHS. In April, a report found that waiting times for some services in the area were up to four years. Building new mental health hospitals is good. It is essential that people have access to a bed and good quality care near where they live. But given that the number of mental health admissions increased last year by 6.7%, there has to be an examination of the root causes of this increase. According to the charity Mind, the figures showed that:

people are not getting help for their mental health problems early enough, meaning they become more unwell and more likely to reach crisis point.

Finally, Corbyn spoke about one aspect of the crisis that politicians often like to ignore. That was the impact austerity has had on mental health. He said:

But also, as a society, recognise where levels of stress come from – through poverty, bad wages, bad housing, all those things.

This is a view backed up by a variety of professionals. A report by Psychologists Against Austerity found that:

Furthermore, a letter signed by hundreds of psychiatrists and psychologists earlier in the year described the impact of the austerity policies on mental health as “profoundly disturbing”. And you don’t need to be a psychologist to see that homelessness, poverty, cuts to benefits and services, and instability in housing and wages are going to have massive consequences on the mental health of those affected.

Generally, the debate between Smith and Corbyn was lacklustre and at times descended into farce. Candidates were quizzed, for example, on whether they could identify celebrities and on how many gold medals Olympic athletes had won.

But Corbyn’s words on mental health were powerful, and they clearly resonated with the audience. One undecided audience member ended up supporting Corbyn by the end of the debate, saying it was because of his comments on this subject.

Politicians have puffed hot air about mental health services and the crisis within them for some time. In less than a minute, Corbyn showed not only that he understands and has empathy with those suffering from poor mental health, but that he also has concrete ideas on how they should be addressed.

– See other Canary articles on the subject of mental health.

– Find out more about poor mental health and how to challenge the stigma surrounding it.