J.K. Rowling in public meltdown as the Labour coup backfires despite a 'rigged' election - The Canary 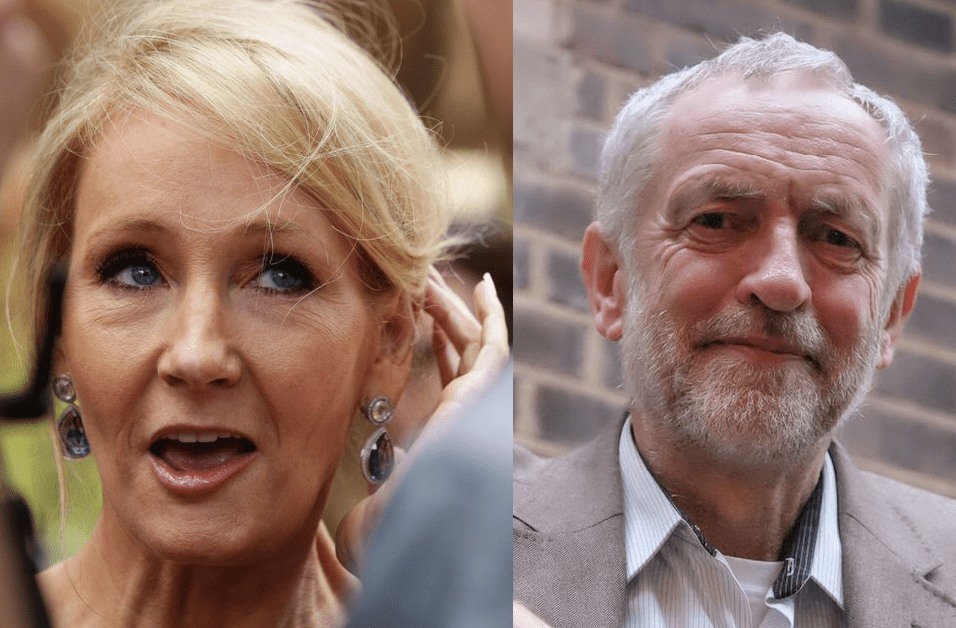 Bestselling author J.K. Rowling has had a public meltdown as the Labour coup looks set to backfire. A new YouGov poll placing Jeremy Corbyn at 62% and Owen Smith at 38% suggests the incumbent will only increase his mandate of 59.5% from last year. This is despite allegations from the Shadow Chancellor, John McDonnell, Corbyn’s closest parliamentary ally, that the leadership election has been effectively “rigged”.

While the results will be music to the ears of Corbyn supporters, steadfast critics of the Labour leader, like the author of the Harry Potter books, are less than amused:

One day in the far distant future we'll look back and we WONT LAUGH, LABOUR, BECAUSE THIS ISN'T BLOODY FUNNY.

And upon closer inspection, the poll results only get worse for the Labour coup:

It does not look good for the Smith camp. After failing to intimidate Corbyn into quitting through a series of coordinated resignations, all the signs point to the coup only increasing his mandate in the subsequent leadership challenge. While only 39% of Constituency Labour Parties supported him in 2015, 84% backed him this time round. Crucially, he has gained the support of CLPs which previously backed the likes of Liz Kendell and Yvette Cooper, well to the right of the party.

@jk_rowling what you do when you can't sleep?

Worse still, the Labour leadership and its supporters will argue that, if Corbyn does win, it will be in spite of numerous attempts to rig the democratic process in favour of his opponents. Labour party members and affiliates have reported a mass purge of Corbyn supporters ahead of the election. McDonnell responded after Ronnie Draper, the general secretary of the baker’s union, BFAWU, became one of the disenfranchised. He stated the decision was:

shocking, and appears to be part of a clear pattern of double standards

Meanwhile, Corbyn has accused Labour officials of disenfranchising members without giving them a chance to appeal or telling them why.

Arbitrary bans are not the only way the Labour coup appears to have purged Corbyn supporters. After winning an appeal in court, Labour’s National Executive Committee (NEC) succeeded in retroactively banning Labour members who joined in the last six months from voting in the leadership election. The NEC also raised the ‘registered supporter’ voting fee from £3 to £25, suspended CLP meetings until after the election and has barred members who joined after June 2015 from attending the party’s national conference in September.

A lot of the nearly 130,000 new Labour members who joined since January are believed to be supporters of the incumbent, so critics argue that disenfranchising them constitutes anti-Corbyn gerrymandering. Indeed, the NEC has not provided any valid reason for discouraging and retroactively disenfranchising, rather than welcoming, new party members.

Right-wing Labour MPs did not resign over the Iraq war disaster, but they did to try to topple their elected leader. Considering their actions and the underhand gerrymandering of the NEC, Rowling’s support of the coup may come as a surprise to those aware of the moral messages within the Harry Potter books. But so would her support for the illegal Israeli occupation that oversees the daily subjugation and segregation of Palestinians. Potter fans may begin to think that the moral heart of the bestselling series is as fictional as Hogwarts, for the billionaire author.

Embarrassingly for the Labour coup of media pundits, celebrities and politicians, all the signs point to Corbyn winning again in spite of the coup’s numerous attempts to subvert the democratic process. With double the mandate and a clean-sweep in the recent NEC elections, the incumbent will be able to steer the party firmly away from Blairism.

– Support the Canary so we can continue to bring you the context that matters.
– Write to your MP to express any discontent.
– Pledge to take direct action.