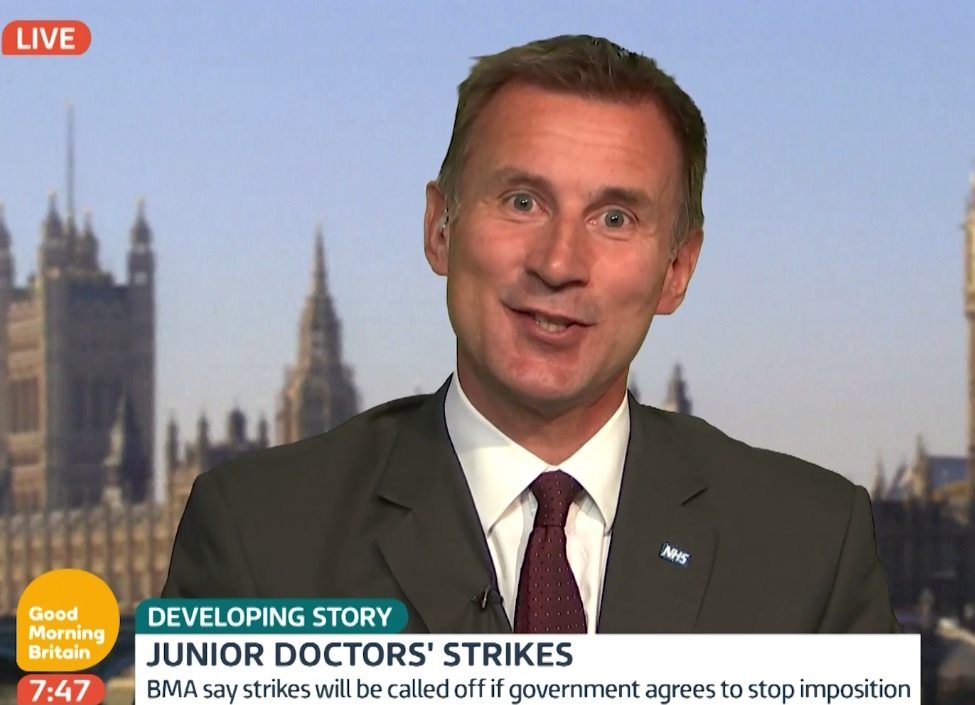 Jeremy Hunt was plastered across television screens and radio airwaves on the morning of 1 September following developments in the junior doctors’ dispute. In one interview, he was asked about whether Vote Leave’s pledge to spend £350m on the NHS after Brexit had been discussed at a recent cabinet meeting. His reaction was to laugh. That’s right, he chuckled at the very prospect.

Hunt was interviewed on Good Morning Britain (GMB) in light of the British Medical Association’s (BMA) announcement that a five-day junior doctors strike will take place in September.

In July, junior doctors voted to reject the government’s current new contract offer. A battle has been raging since 2015 between the Conservative government and health professionals over the terms of the contract. The government says the contract changes are necessary to fulfil its manifesto pledge to create a 7-day NHS.

Many junior doctors believe the contract is “completely unsafe” and the impact will be that “patients will suffer”. Yet the government has promised to impose the contract regardless, despite the fact that Hunt’s own Department of Health (DH) has concluded that it poses multiple “risks”.

Hunt cracks up on live television

One of those “risks” identified by the DH is that the NHS does not have enough funding to fulfil the 7-day pledge.

GMB presenter Ranvir Singh offered up a solution to this dilemma:

What might help is the £350m promised from the Brexit camp that would go straight to the NHS. There was a cabinet meeting at Chequers yesterday, presumably you were there, did Boris apologise for that? Or did he cough up where this money might be coming from to help you out?

After he managed to suppress a smile, Hunt responded:

Well, we are just at the start of the process of the negotiations for leaving the European Union… We haven’t left the EU yet. We are going to be leaving the EU, and obviously when we do – if that released money for, extra money for, the NHS – no one would be more thrilled than me. But that is some way off…

By the time Hunt reached the end of his final sentence, his amusement at the question had taken complete hold. The significance of such a reaction was not lost on Ranvir, who commented:

Yeah, the fact that you’re scoffing at the very idea of it tells us more than what you’re saying in many ways

£350m a week would go a long way to resolving the current financial woes of the NHS. But as was made clear by former UKIP leader Nigel Farage the day after the referendum, that pledge was merely a gimmick. It was a convincer, based on bogus statistics, with the sole aim of enticing people to vote Leave.

The idea that those battling for Brexit were ever going to go through with it is laughable. As Hunt has just perfectly illustrated.

But the fact that Hunt feels at ease openly mocking what would be a partial solution to the problems of the very department he controls at least lays something to rest.

In another of his interviews on 1 September, Hunt compared himself to Nye Bevan, the founder of the NHS. But as many commentators have noted, there is a fundamental difference between the two. One created the National Health Service. The other is bringing the UK’s treasured institution to the brink of destruction.

And the former would certainly not scoff at millions of pounds being fed into the NHS to pull it back from that cliff edge.

– Sign the NHS Reinstatement Bill petition, which would reverse the dismantling of the NHS