These levels of hypocrisy are mindblowing, even for The Sun [TWEETS] - The Canary 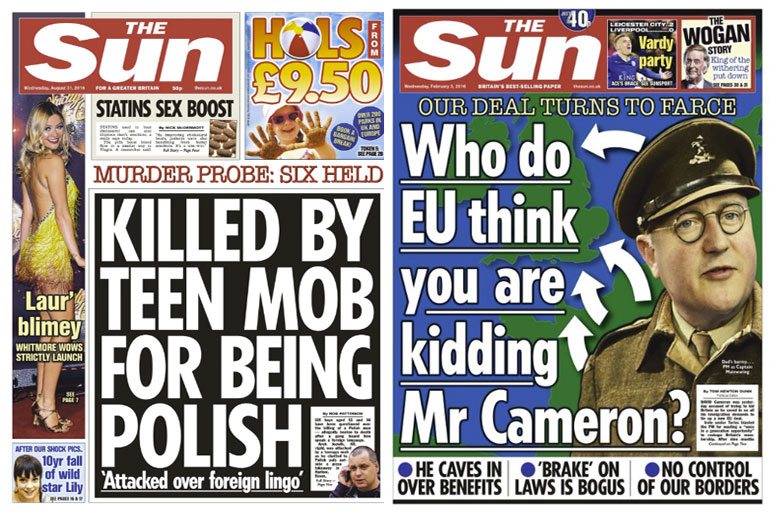 On the 31 August, The Sun‘s front page was emblazoned with the headline ‘KILLED BY TEEN MOB FOR BEING POLISH’:

The Harlow murder probe on the front page of the Sun tomorrow morning pic.twitter.com/TExjDOAT6i

The story relates to the tragic death of a man in Harlow, Essex, reportedly beaten to death by a group of 15- and 16-year-old boys who heard him speaking Polish with his friends outside a takeaway.

With reports of increases in racist and xenophobic hate crimes in the wake of the Brexit vote, it is absolutely right that the media illustrates the impact that anti-immigration rhetoric can have. If a man is attacked because he is Polish, that is because the idea that there is something wrong with people being Polish has grown.

What The Sun is conveniently omitting in its reporting is the impact its own coverage has had on that same environment.

Experts from the University of Leicester’s Centre for Hate Studies have suggested there is a link between the current climate for hate crime and the actions of politicians and the media. Professor Neil Chakraborti said:

the toxic climate surrounding the referendum debate enabled this hostility to surface within political speeches, on front pages of newspapers and in everyday conversations within pubs, in classrooms and on social media platforms. The focus shifted from issues relating to EU membership to the one big issue for Britain: namely, ‘Them’.

Perhaps this slipped the minds of those who work at The Sun. It was only back in February that their front page compared immigration from EU countries to the advance of enemy forces in WWII. Their ‘Dad’s Army’ mock-up of David Cameron even used the then-Prime Minister’s name in place of Hitler’s in the show’s theme tune.

The complaint was, and always has been, that the government has ‘lost control’ of the UK’s borders and as such, there are too many immigrants here.

The hypocrisy of the stance was summed up best by tweeter Liz Gerard, who juxtaposed the front page, second page and fifth page of the paper on 31 August.

Pages 1, 2 and 5 of this morning's @TheSun #journalism #migrants #hate pic.twitter.com/htpVjaG1ju

Sandwiched between the story about the murdered Polish man is a report on the “800,000 hidden migrants” working in the UK. It contains ‘shock’ statistics regarding the number of migrants in the UK, and is a familiar format to anyone who has tracked tabloid xenophobia before – the intention being to spark anger and mistrust of migrants. And anybody who could feasibly be considered one.

As Chakraborti explained, it is this othering – ‘us vs them’ – that leads to the kind of dehumanisation that culminates in violence against those perceived to be from that ‘other’.

Of course, it seems unlikely that The Sun is going to acknowledge that anytime soon.

Support independent media like The Canary to challenge the media narratives put forward by the mainstream.