People at the sharp end of austerity have been giving evidence, and it's heart-breaking - The Canary 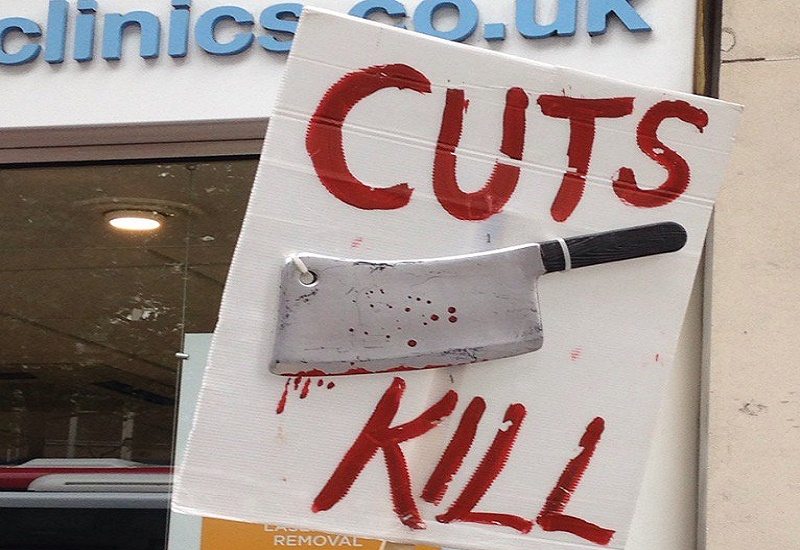 In parliament on 5 September, a report was launched into the effect of government cuts on disabled people in the UK. Presented by Inclusion London and Disabled People Against Cuts (DPAC), it detailed the very real impact the Conservative government has had on individuals’ lives. Namely the closure of the Independent Living Fund (ILF). The analysis does not make for pleasant reading, and only further compounds the argument that Conservative austerity is ideologically driven.

The ILF was a scheme to help nearly 18,000 disabled people with high support needs to live independently. Launched in 1988, the aim was to assist people who were “severely disabled” to live in their own homes, as opposed to residential care. It enabled people to work, access their communities, and engage in a private family life. But in 2014, it was announced that the ILF would close permanently on 30 June 2015. The government cited that it was “financially unsustainable”. Funding for disabled people would be transferred to local authorities, but this money would not automatically be ring-fenced.

Despite several legal challenges and numerous protests by disabled rights activists, the fund did indeed close last June. Local authorities are now responsible for the distribution of centralised grants to former recipients of the ILF. Everyone has to undergo a reassessment before they receive funding. The situation is different outside of England, where national assemblies have protected the funding available.

The report, by Inclusion London, is a case study on the closure of the ILF in London and the impact this has had on disabled people. Freedom of Information (FOI) requests were sent to all 33 London local authorities, requesting various pieces of information. What the report details is shocking. But more shocking are the human stories behind the closure of the ILF – stories that never appear to be considered by the government during its relentless drive for austerity.

The reality of Conservative cuts

At the report’s launch, Jonathan Bartley, the Green Party’s new co-leader, gave an emotional speech about the impact the closure of the ILF has had. He knows only too well of the real life effects, as his son is a wheelchair user:

My route into politics is very much led by my son… who is a wheelchair user. I know from personal experience battling for everything… battling your local authority, battling, when you thought your social worker should be your ally, having to fight your social worker as they try to make cuts to your direct payments… So many people with disabilities are scared about what is going to happen… they won’t speak up against their local authorities because they are scared of being penalised… I look at my 14-year-old son and his future and it scares me… The Green Party will support every recommendation in this report.

Actress Cherylee Houston, who plays Izzy Armstrong in Coronation Street, spoke movingly of some of the situations people in Manchester had been left in:

The reality and horror of many of our lives is abhorrent… In Manchester… if you have high support needs there is no money to help you wash your clothes, to clean your house, do your food shopping. You have no right to go outside your home. I was talking to somebody from Manchester today who used to have 64 hours care [a week]. She had a full life. It was then cut to 34, then 12… That’s half an hour to get up in the morning, and half an hour to go to bed… Local authorities are deciding what time we go to bed… It’s just appalling. Our disabled children will never live independently. Where are their rights?

The report provides countless case studies of former ILF recipients and their current circumstances. But some of the most upsetting stories were heard in parliament on Monday, from people directly affected.

No independence without the ILF

The Independent Living Fund enabled me to get out of my house, to campaign, to do all sorts of different things. I’ve been Chair of three different disability groups, I went to Glastonbury… Since the closure of the ILF, my council initially wanted to cut my [support] from 12 hours a day to three hours a day. Literally just enough to get me out of bed in the morning, back into bed at night and have one meal during the day… When I said I needed someone to support me going to the toilet during these hours the council said they’d supply me with incontinence pants. If you put a child into nappies who doesn’t need them… and refuse to allow them to use the toilet for up to 12 hours at a time that would be considered criminal abuse.

Nathan, who lives in Wales where the ILF funding is ring-fenced until 2020, said:

I still worry about disabled people as a whole, whether they live in England or Wales… I say I’ve been assured of care until 2020. But even the actual allowance I’ve received is not good enough for my care needs. I’ve got a progressive disability… When I first started using the ILF I had 86.5 hours a week and that used to be OK… But now [it’s been reduced] it’s embarrassing. When people leave me at 2 o’clock [for four hours] they have to undo my trousers so I can use my urinal. But if anyone comes and knocks at my door between 2-7pm, I don’t have any dignity as my jeans are undone. And I might spill my urinal on my jeans, and I have to sit like that until 7pm.

The closure of the ILF and its chaotic transfer to local authorities must not just be viewed in isolation. Since 2010, disabled people have faced a barrage of attacks from Tory-led councils. As The Canary recently reported, the UN Human Rights committee published a damning report into the effect that years of Conservative policies have had on disabled people. It was “seriously” and “deeply concerned” about the effects of successive reforms to welfare policy, the ‘Bedroom Tax’ and the Tories’ perpetual austerity. The committee said that the Conservatives must review all austerity measures since 2010 and said that all cuts to benefits under the previous and current governments should be reversed. But this seems insurmountable, while local authorities are failing to get even the basics of support right.

In the FOI requests submitted by Inclusion London, local authorities were asked how much of a reduction in funding former ILF recipients had seen. While some reported zero reduction, four boroughs had slashed funding by over 50%. The worst offender was Labour-controlled Waltham Forest, which has pushed a 68% reduction onto 60 disabled people. Only six boroughs said they were ring-fencing the central government grant specifically for former ILF users. 18 said it was being put into their general Adult Social Care Budgets, and five reported they would not be protecting the money at all. One of these was, again, Waltham Forest.

Inclusion London also requested the number of complaints received by the authorities, regarding their handling of the transfer of the ILF. Over half of all the complaints received fell into one borough’s remit. That being Waltham Forest. Shadow Chancellor John McDonnell gave an assurance on Monday that he would be writing to every Labour-led local authority, urging them to meet their full obligations regarding funding.

The inconsistencies across London cannot be ignored. As the report says, the “overwhelming conclusion” from the FOI responses is that a “postcode lottery” is happening. Furthermore, the government has made it specifically clear that the central grants should be used for former ILF recipients. But this is categorically not happening, and this is just in London.

FOI requests submitted by Channel Four News, not yet made public, show that across England, 85% of local authorities have cut people’s funding after the closure of the ILF. Furthermore, Mitchell Woolf QC of law firm Scott-Moncrieff believes that many local authorities may have broken the law, by being in breach of the Care Act 2014.

A disgrace to shame us all

Out of all the attacks on disabled people’s benefits, and the report from the UN, the closing of the ILF is probably the cruelest cut of them all. When viewed in terms of the amount of money it cost the government, there is no other conclusion to draw except the closure was an intentional, ideological attack. The fund cost £359m a year. This equates to 0.017% of the UK’s £2.06 trillion annual gross domestic product (GDP). In simple terms, this is less than half of half a penny out of a £10 note. But to disabled people, it is the difference between a dignified life and being treated like cattle.

The cutting of funding means people have lost hours of support. People are being made prisoners in their own homes. Adults are forced to wear ‘nappies’ when they’re not actually incontinent. Grown men have to sit in their own homes with their trousers down in case they need the toilet. And if they have an accident, they sit in their own urine until their support worker arrives. All of this in the ninth richest country on the planet, in the 21st century.

We’re all human beings, the same as anyone else. Hopefully one day that will be realised.

The Conservatives should be truly ashamed, and responsibility should be placed firmly at their door. But the public needs to start acting as well. We, as a society, need to start accepting responsibility and speak up against the government’s disgraceful treatment of disabled people.

– Volunteer to support people with a learning disability, through Mencap.