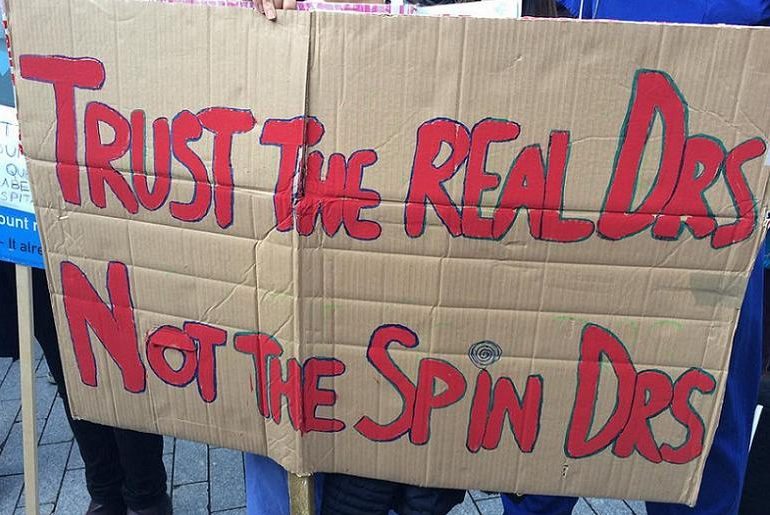 On 19 September, junior doctors did what many in the UK would like to and took Jeremy Hunt to court over ongoing disagreements with his proposed contract.

The judicial review is the latest in a long line of back and forth between Hunt and the doctors. As it stands, Hunt has proposed a contract for a seven-day NHS service, which junior doctors have voted to reject. The British Medical Association (BMA) union voted in November 2015 for strike action, and a series of strikes have happened throughout 2016.

Further negotiations were carried out this year, with Hunt’s final contract offer being made in July. The BMA held a referendum on these terms, and 58% voted against accepting them. In response, Hunt said:

Unfortunately because of the vote we are now left in a no-man’s land that, if it continues, can only damage the NHS.

He has pledged to impose the contract in October 2016. And that is why he is in court.

Over the course of 2016, a group of junior doctors called Justice for Health came together to crowdfund the legal fees for a judicial review. They want the High Court to decide whether decisions made by the Secretary of State for Health and NHS Employers are “legal, reasonable and have the consequences that are intended”.

Justice for Health argues that:

It is the group’s claim that the NHS in England is structured so that the Secretary of State for Health “cannot tell foundation trust hospitals, local councils or GP surgeries who to employ or on what terms”. He may be able to instruct other NHS trusts, but only after “undertaking a public consultation about the effect of his plans”, which he has not.

Finally, Hunt also made his decision to impose the contract before the terms and conditions were finalised, and before an Equality Impact Assessment had been completed. This, Justice for Health says, makes it unsafe.

Hunt’s legal team has dismissed the allegations as “wholly without substance”. According to barrister Clive Sheldon, Hunt had merely felt that the new contract should be introduced by the NHS. He had not attempted to “compel” NHS employers to use it, but simply wanted to “approve” the new contract.

Justice for Health disagrees. It feels that Hunt is attempting to dictate the terms on which NHS employers and other bodies should work with junior doctors. Regarding support from employers, it says:

The [Secretary of State] claimed that he had the backing of 18 hospital trust chief executives, this claim has now unravelled as 12 of them have made clear that they disagree with imposition.

The judge, Mr Justice Green, has already outlined that he thinks it is “plainly a serious case” that “requires full judicial review”.

Dr Ben White, one of the founding members of Justice for Health, said:

Jeremy Hunt’s own civil servants in the Department of Health said there was a very high risk to trying to bring in seven-day services without the required investment and staffing.

And actually you’ve got us, the doctors and the nurses on the front line, saying, ‘This is not going to be safe’.

It is the argument of junior doctors that they are already providing a seven-day, around-the-clock service to patients via out-of-hours services and Emergency and Urgent Care. Along with that, they also have safeguarding systems in place to ensure that they are not being exploited by employers and that they are rewarded for the unsocial hours that they work.

Hunt’s new terms have left a lot to be desired. As well as requiring junior doctors to provide routine or non-urgent care on the weekends, there has been no safeguard written into the contract, and there is no indication of there being any extra doctors or funding to assist with the inevitable stretch.

Even Hunt’s false claim that more patients die at weekends than on weekdays, often touted as the evidence of a need for more doctors on weekends, does not in itself explain a need for the junior doctors’ contract. Patients admitted to hospital on weekends are often sicker than others, and would quite likely benefit more from having more specialists on hand.

Either way, the answer to understaffing issues should first and foremost be greater investment. Unless you’re Jeremy Hunt, which is why he finds himself in court for two days this September.

– Write to your MP to encourage them to support the junior doctors.