The front page of The Daily Mail on 2 November looked like a bigot bomb exploded, covering everything in a grim and bitter bile – which serves as something of a metaphor for Brexit Britain.

The problem with Polish lorry drivers

The story? A Polish lorry driver was convicted for killing a family while driving and using a mobile phone simultaneously. A tragic case; a family devastated.

But for The Mail, the significant thing about the story was not the lorry, or the mobile phone. It was the nationality of the driver: 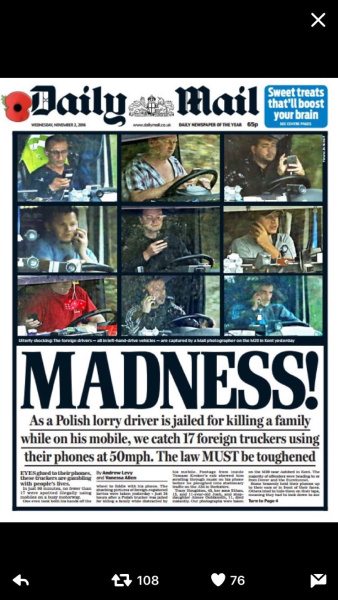 Of course, we can always rely on The Daily Mail to reflect the very worst of Britain. And right now, there’s a lot on show. Just the other week, the paper was running bogus computerised age experiments on the faces of child refugees to try and prove Britain was swarming with undercover adult refugees. You know, just in case we accidentally saved a 19-year-old from a bloody civil war rather than a 17-year-old.

But the rage really took hold in anti-immigrant Britain when The Mail, The Sun, and politicians like former Labour Home Secretary Jack Straw and Conservative MP David Davies demanded we start checking the teeth of refugees to establish their age. Cue the hysterics of the right, demanding: ‘Check their molars!’, ‘They should be happy we’re checking their teeth! There’s no dentists in Syria!’

Things got so serious that the British Dental Association had to come out against the plan to calm things down.

Echoes from the past

You know who loved dental checks? The Nazis. They used to take the gold from Jewish teeth. Then, they slaughtered them alongside political opponents, sick and disabled people, and anyone else deemed untermenschen (sub-human). Many of those people attempted to flee for their lives. And The Mail treated them no differently than they are treating Syrian refugees today. In 1938, as the Jewish population of Germany began to flee from Hitler’s regime, this was the welcome they received from The Daily Mail:

Not only did The Daily Mail rail against the incoming Jewish families, but they spent years cheerleading for fascism in general, and Hitler in particular. In 1934, the paper’s owner Harold Harmsworth (1st Viscount Rothermere) wrote an editorial personally inviting Britons to embrace both:

Worse, The Daily Mail is not some fringe element to be laughed off or dismissed. It is by far the most-read newspaper in Britain, in print and online, with a monthly audience of 29 million people. By comparison, The Sun is reaching just 2.3 million, and The Guardian around 7 million.

Thanks to the constant stream of misinformation coming from the mainstream media, some people literally believe that Syrian refugees are actually a foreign army sent to take over Britain. In fact, more than 200,000 people signed a petition calling for the closure of Britain’s borders to defend from this alleged ‘invasion’.

The Daily Mail is not alone. But it is the worst and the most read. And instead of those journalists and political cartoonists who are inciting such hatred being removed from their posts or dealt with by law enforcement, they are being honoured with MBEs from the Queen for “services to the newspaper industry“.

At the same time, incredible new media organisations like Novara Media, Media Diversified, Media Lens, CommonSpace, Bella Caledonia, Real Media and many others are taking the fight to the establishment. They have been ably assisted by an array of skilled and committed bloggers like Vox Political, Another Angry Voice, Pride’s Purge and Politics and Insights (Kitty S Jones) – to name but a few. These outlets reflect the better values of Britain, and the kind of visionary, open-minded, diverse, united, and progressive country that we could be – if we weren’t wasting time, energy and emotion on scapegoating vulnerable people on behalf of the establishment.