I, Daniel Blake just got real for the DWP - and it's about to get real for millions more of us too - The Canary 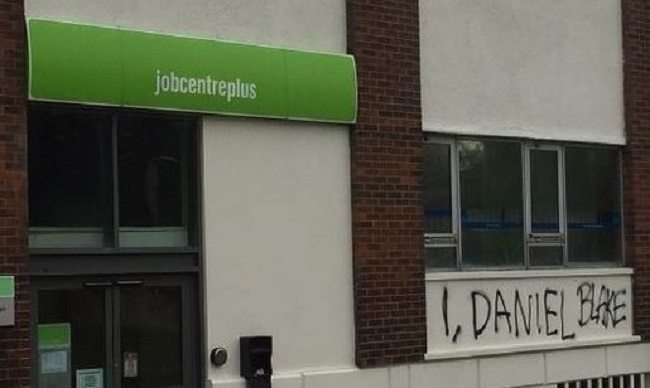 The film I, Daniel Blake just got very real for one Department for Work and Pensions (DWP) office. But an announcement by the department could mean that the movie may well become a reality for millions more people.

A wake-up call for the DWP?

At a Jobcentre Plus office in Exeter, someone spray painted the words “I, Daniel Blake” across the outside of the building. In a move that echoes a scene from the award-winning film by Ken Loach, the graffiti appeared over the weekend of 26-27 November.

Loach’s film I, Daniel Blake tells the story of a 59-year-old joiner of the same name. After suffering a heart attack at work, Blake, from Newcastle, applies for Employment and Support Allowance (ESA). But he’s forced to move onto Jobseekers Allowance (JSA) because the DWP says that he is ‘fit for work’. The Exeter graffiti echoes a scene where Blake is told by his DWP ‘work coach’ that he is not making enough effort to get a job. Blake then sprays “I, Daniel Blake demand my appeal date before I starve” on the outside wall of the Jobcentre Plus building.

The film outlines the adversity and challenges faced by older people forced onto benefits. And it also highlights the stark failings of the DWP and the welfare system. But in reality, these challenges could become very real for millions more people. Because the government may be increasing the retirement age for all of us – again.

A DWP report has revealed that people who are in their twenties today may not be able to retire until they are 70. The Independent reports:

Documents produced by the DWP reportedly suggest a ‘more aggressive’ timetable for raising the state pension age, which could take it higher than ever before more quickly than previously expected. Tens of millions of workers aged 30-45 and 45-55 could also have to work for longer before retiring, until they are 69 and 68 respectively.

But a former pensions minister has called on the government to be “transparent”. Ex-Liberal Democrat MP Steve Webb has said the government must “come clean” about plans for the state pension:

If the government is planning to force tens of millions of people to work to 68, 69 or even 70, then it should be transparent about its plans. This would be a huge shift and should be properly debated, not buried in a technical document seen only by specialists.

Work until you drop

The Office for National Statistics (ONS) forecasts that by 2039 the number of pensioners compared to working-age people will have exploded. The ONS says that those of pensionable age and over will increase by 32.7% on today’s numbers. And those over 75 will hit 9.9 million, a 89.3% increase. Therefore, the rise in retirement age is required to offset the cost of increased pensions payouts.

Unemployment for the over-50s has fallen. But research shows that people in this age group are more prone to long-term unemployment. By increasing the retirement age so rapidly, the government may well be saving money on pensions. But with no guarantees of work, nor that there will be enough younger people to sufficiently fund the state pension pot, the government may well be creating a whole generation of Daniel Blakes.

– Read more articles by The Canary on I, Daniel Blake.