Brexit just delivered its most nauseating 'gift' so far, but there's a silver lining - Canary 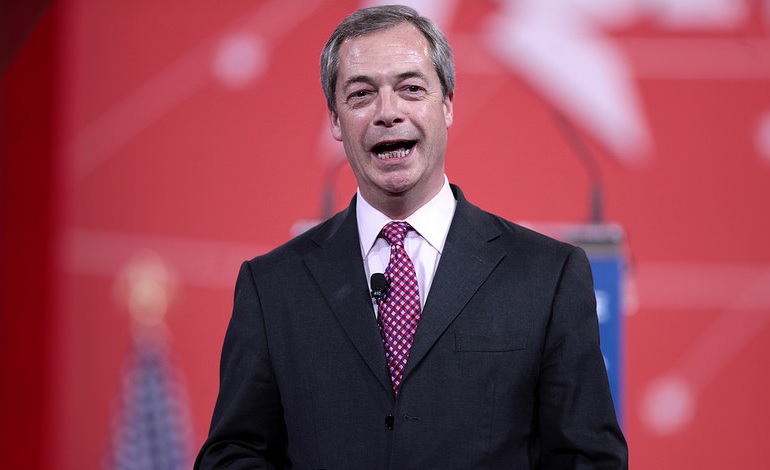 Since its inception, Brexit has been a divisive force in Britain. And its latest consequence will do nothing but widen the gap.

Nigel Farage is to present a brand new evening show, LBC radio has announced. Some have welcomed the idea of the ex-UKIP leader remaining a regular feature in the year ahead. But others, who expected Farage to exit the scene once the UK voted out of the EU, have responded with dismay.

His new gig does provide the public with an opportunity, however. And it’s one that could diminish his influence once and for all.

Farage’s new spot on LBC will run from Monday to Thursday at 7pm. It will be “full of opinions, callers and reactions to the biggest stories of the day”, according to LBC. The radio station’s managing editor James Rea said:

With Brexit and the inauguration of President Elect Trump, Nigel Farage is the man at the centre of the two biggest stories this year. He is a powerful communicator and has proved himself as a natural broadcaster.

Farage, of course, did play an integral part in the EU referendum. UKIP’s primary purpose as a political party was to play in opposition to the EU.

He also threw his weight behind US President-elect Donald Trump. He appeared at Trump’s campaign rallies, and the prospect of a role as UK ambassador to the US under a Trump presidency has been raised.

So Farage has “proved himself” a “natural broadcaster” to Rea, presumably through his appearances on the radio station before. But it is undeniable that his ‘powerful communication’ delivers a very particular viewpoint. It is pro-Trump, anti-immigrant, and pro-hard Brexit. It stokes fear about diversity and arguably normalises neo-Nazis.

And while Farage paints himself as the ordinary bloke, he is earning tens of thousands from the very organisation he supposedly reviles.

Farage is an unashamed far-right thinker, and that is what he will ‘strongly communicate’ on his nightly show. But it will not be his voice alone. In July, a caller to Farage on an LBC phone-in show humiliated the ex-UKIP leader. They highlighted Farage’s inability to speak any language other than English, despite having spent over a decade in Belgium in his role at the EU. This language criticism is one Farage himself has levelled at immigrants from other countries who reside in the UK.

Now, the opportunity to call Farage out on any hypocrisy, falsehoods or intolerance will happen on a daily basis. From 7pm, Monday to Thursday, anyone offended by his diatribe can pick up the phone and confront it. Of the show, Farage has said:

I invite listeners to agree with me or challenge me and together we can lead Britain’s conversation.

But depending on who calls in, that “conversation” may not move in the direction Farage has planned. So although this may not be the Brexit ‘gift’ for 2017 that many people wanted, it could be a golden opportunity to cut down Farage’s divisive rhetoric once and for all.

– Help to encourage tolerance with HOPE not hate.