Corbyn shatters the media frenzy over his 'new' image with one single sentence [VIDEO, OPINION] - Canary 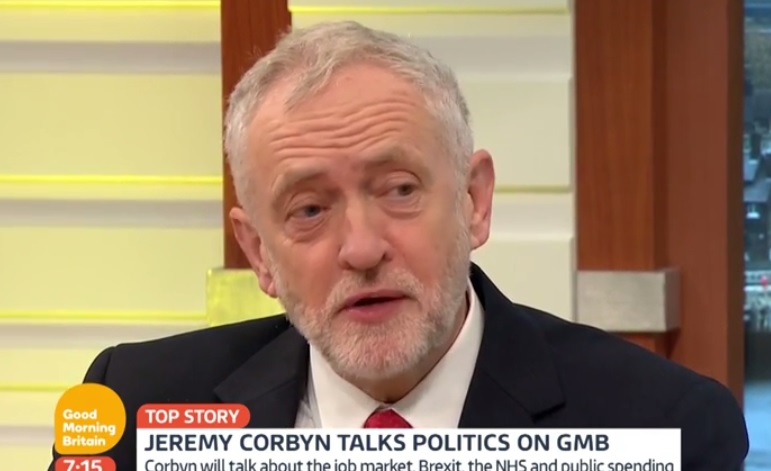 In just one sentence, Jeremy Corbyn destroyed the media frenzy over his ‘new’, Donald Trump-esque persona. It seems that, although the Labour leader has a few untrodden tricks up his sleeve for 2017, his core character will remain the same.

But no ‘sea change‘ is occurring. And certainly not in the media itself, which has used his supposed ‘reinvention’ in Trump’s image as another stick to prod him with.

Ahead of a speech setting out his agenda for the year ahead, Corbyn appeared on Good Morning Britain on 10 January. Presenter Piers Morgan asked the Labour leader about a pre-released statement from the speech on immigration. He said:

now you say Labour is not wedded to free movement for EU citizens as a point of principle. Do you accept that this is a massive sea change in your rhetoric about this?

It’s not a sea change at all. The point I’m making in the speech today is that migrant workers are recruited to undercut and undermine working conditions in this country.

This is a point Corbyn has been making for a long while. He advocates regulating to stop employers bringing in low-paid workers from outside the UK. In itself, he believes, this would reduce immigration numbers.

So not quite the “sea change” Morgan suggested.

Corbyn was also asked about why he needed to be “rebooted” on the programme:

Well, you described me as a reboot and then ask why I need to be rebooted, and I don’t think I do.

Presenter Susanna Reid then gave his appearance on the programme as proof of the reboot. And as a Labour Party source told The Canary, Corbyn will indeed attempt to appear on more national media platforms this year. He will also attempt to address any negative reporting he receives head on, and work to ensure those platforms help the wider electorate to understand what he stands for.

And these are sensible developments if he wants to get his message out. But as Corbyn pointed out, they do not constitute an overhaul of his leadership.

Corbyn also addressed the notion that his team has adopted a Trump-style strategy. This idea, that Corbyn is to reinvent himself as the UK’s Trump, has filled media pages recently. But the Labour leader said that claim was “more than slightly bizarre”.

While he and his team may be planning to take the media bull by the horns, as Trump often does, that’s where the similarity generally stops. Their policy positions – on immigration, diversity, and many other issues – are miles apart. And although the mainstream media has generally concluded that Corbyn intends to “copy” Trump, the reality is the reverse.

Trump announces his bid for the US presidency around the same time as the first Labour leadership election. But his campaigning doesn’t begin until early 2016. He succeeds in gaining the presidency in November 2016.

Yet the media now say Corbyn is about to relaunch himself as a “Trump-style anti-establishment warrior”. Because, of course, the egg always comes before the chicken. Doesn’t it?

In short, Corbyn will not be rebooting who he is, or what he stands for. But he will be reinvigorating his contact with the press. And he will do that in order to get the anti-establishment, pro-rights, pro-diversity, anti-environmental-catastrophe message he’s been sounding from the onset out to more people.

Not so Trump-like after all.