The Conservatives just gave their first party political broadcast of 2017. We fixed it for them [VIDEO, OPINION] - Canary Workers’ Co-op 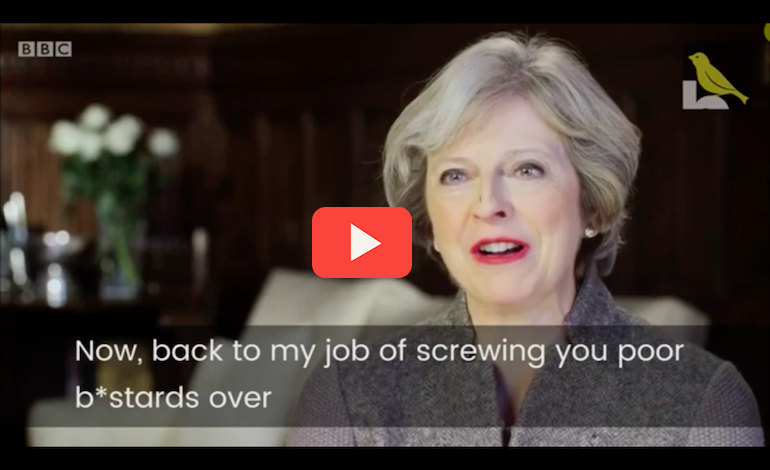 On Wednesday 11 January, the Conservative Party released its first party political broadcast of 2017. And the video was a full three minutes of Prime Minister (PM) Theresa May attempting to woo the country with her positive, genteel outlook. But The Canary felt something wasn’t quite right. So we’ve had a look at May’s speech, and given it honest subtitles (video below).

“A country that works for everyone”

May began with her favourite phrase: “I believe that our country needs to work for everyone”. She said she wants one that works:

All well and good, Ms May. But you’ve just sold off our shares in Lloyds. Making the public (the poor) a loss, but the bankers (the rich) a profit. Your Chancellor’s predecessor, someone who “knows the right people”, flogged the Post Office to his best man’s hedge fund. And now 300 Post Office staff are getting the sack. Also, Richard Branson has a pretty “loud” voice when it comes to getting what he wants. Which is maybe why the government has flogged him bits of both the railways and the NHS in the past few months.

May also said she wants the UK to be a place:

where every single person has the opportunity to be who they want to be.

Prevent is being used to monitor children in schools. Parents are being forced to tell teachers where their kids were born. And the police are monitoring countless left-wing activists. Maybe the PM should publish her guide to ‘Who the Conservatives want you to be’ on the government website.

“A country that works…” YES. We know

In order to ensure the country works for everyone, we’ve got to fight for it. Standing up for the vulnerable, for the voiceless.

By May “standing up for the vulnerable” and “voiceless”, that must mean violating international law. The UN has condemned the Conservative government twice over its “grave” and “seriously concerning” treatment of disabled people and the poorest people in society. And twice the government has told the UN and their accusations of “systematic” violations of human rights to Foxtrot Oscar.

The PM then went on to say:

May was possibly referring to the plan about leaving the EU. But it’s not certain if this means “Brexit means Brexit”. A “soft” or maybe a “hard” Brexit. Possibly a “Red, White and Blue” Brexit. Or maybe a “We’ve f*cked it right up” Brexit.

Speaking about Brexit, May said:

As PM, I have the opportunity to deliver the change people want… Making sure we have a government that’s on the side of ordinary, working class people.

Being “on the side” of “working class people” must mean overseeing an NHS crisis. Having workers in three different transport industries all go on strike in the same week. Gravely underfunding adult social care, to the point where our elderly people are called “bed blockers”. Trashing the education system. F*cking up on climate change. Fracking in areas where these “ordinary, working class people” have told you they don’t want you to frack. If being on our side means all of that, then yes. May is really on our side. And thank God she is.

We’re going to deliver on Brexit. It won’t be straightforward. And it can’t be rushed. But we will deliver on it.

Sounds like the sort of thing Deliveroo would promise. Or maybe Amazon. Possibly a sofa company if you want a settee just before Christmas.

We have the fifth largest economy in the world.

Erm, well, no. Not necessarily. Some economists say [paywall] the UK has the sixth largest economy. After Brexit trashed it. Others say eighth. And some say seventh.

Employment is at a record high.

That would be because the population is at a record high, and part-time and precarious work are skyrocketing.

I think there are opportunities for us to be trading around the world. In a way we haven’t been able to do, up until now.

In “a way we haven’t been able to do” before? Like being charged to trade with the EU? Or negotiate our own TTIP? Which would be ten times worse than the original one? Is it, possibly, having Boris the buffoon negotiating these deals on our behalf? While ascending a zip wire wearing nothing but a Union Jack mankini? It is unclear what May means by her statement.

Praise the Lord for Theresa May

May concluded her sermon by saying:

We are a great meritocracy. What should determine how you get on in life is your hard work and your talents. Not where you were born, or who your parents were. What God you worship, or not. Or whether you’re a man or a woman. Black or white. Straight or gay. That’s what I believe in. That’s my plan for Britain. And together, we can build a stronger, fairer, better Britain.

A more accurate and appropriate ending would have been:

– Read some actual satire from Off The Perch.