Corbyn vows to tackle the real problem with our democracy. And Murdoch will be freaking out [VIDEO] - Canary 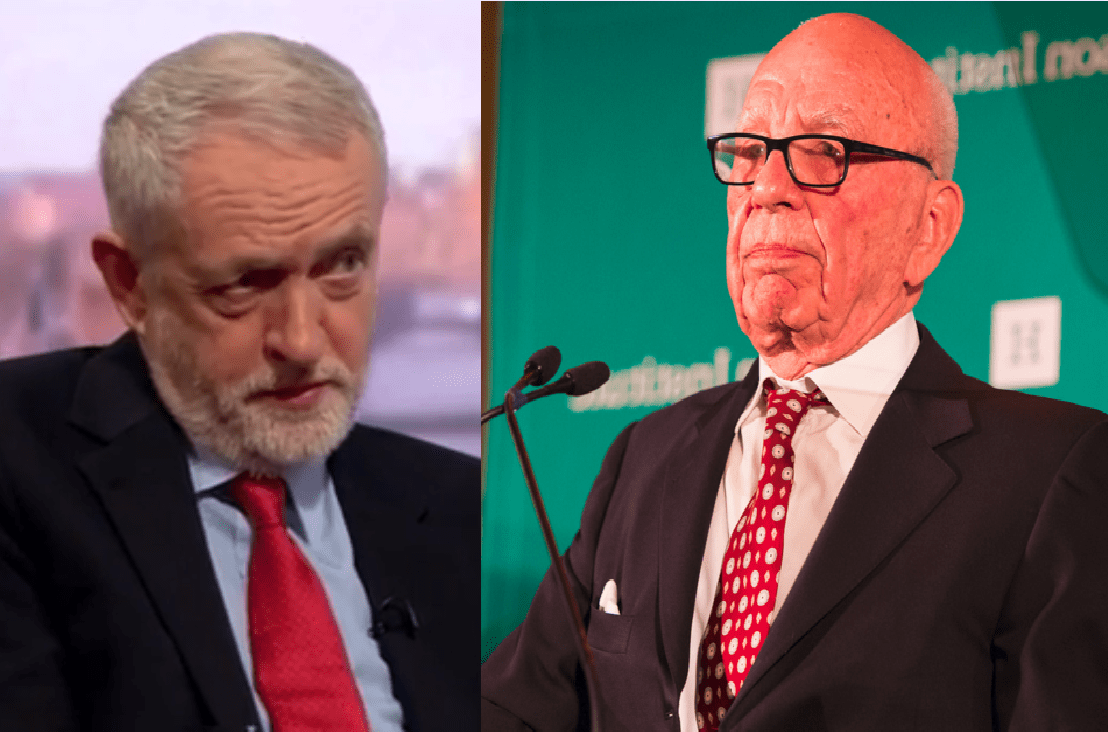 Jeremy Corbyn vowed to tackle the problem at the heart of our democracy on 15 January. And it isn’t good news for Rupert Murdoch and other media moguls.

Speaking about the media to Andrew Marr, the Labour leader said:

I think we also need to remove the levels of concentration of ownership in certain organisations.

To clarify his point, Corbyn looked at the recent example of Rupert Murdoch taking full control of Sky News. Before, Murdoch’s 21st Century Fox owned 39.1% of Sky, which he originally launched in 1989.

I think Murdoch completely taking over Sky, for example, is a problem.

Informed consent is the foundation of any meaningful democracy. So when powerful billionaires are the main gatekeepers of information, informed consent can become jeopardised. People need to base their political decisions on solid information to avoid acting in the interests of elites rather than themselves.

But the UK scored 38th in the 2016 world press freedom index, lower than Ghana, Tonga and Belize.

Perhaps a plurality of views is a key issue here in Britain. One 2016 YouGov study, for example, found that British people perceive their press to be ‘the most right-wing in Europe’.

Correspondingly, Murdoch’s News UK controls one third of our national newspapers. And just three companies own around 70% of these.

These systemic problems suggest that Corbyn and Labour would be right to bring in policy that would limit media ownership.

Back on the BBC, Marr had asked Corbyn:

Do you think you get a fair ride in the media? And do you think media ownership is an issue?

I don’t think the media are very fair in many ways, particularly towards the Labour Party. An analysis done over the first year since the general election showed that over 80% of the print media was actively hostile to the Labour Party. 80% to the major opposition party!

There have been many studies that show strong media bias against Corbyn’s Labour. Academic evidence also shows BBC bias against the Labour leader.

Right of reply and impartiality

Corbyn called for ‘right of reply‘ along with breaking up big media groups to remedy the UK media crisis.

When questioned on alleged bias, the BBC claims it is “impartial”, saying:

The BBC is impartial and our journalists put their personal views to one side when they join the corporation. Our editorial guidelines on impartiality and conflicts of interest can be found here: http://www.bbc.co.uk/editorialguidelines/guidelines/impartiality

Informed consent is the bedrock of a functioning democracy. Without it, people could be representing powerful interests in the voting booth, rather than their own interests. Corbyn is right to say Labour would bring more plurality to the media. This is a crucial issue that the Labour Party should tackle head on if it is serious about real change.

Watch the full interview here (or at 8:26 for the question on the media):