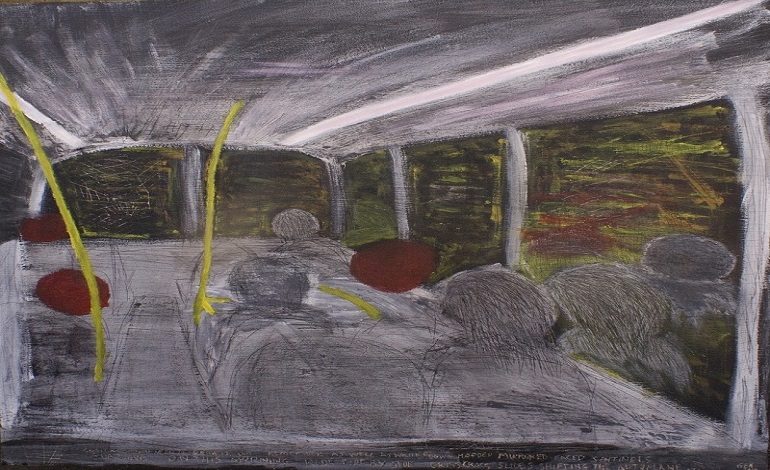 An exhibition by a group of London-based artists is currently happening in the City of London. In the Dot Dot Dot/Have Mirror Will Travel aims to challenge the way we look at out lives in the 21st century. And its potent mix of music, abstract art and spoken word portrays many home truths. Some of them often uncomfortable.

“Brother G and the Trouble” are Alison O’Melia and George Harris, who also work with other artists such as Mitzy Valentine & Agatha Lisowska. Originally from Derby, the collective met through mutual friends who were also artists and musicians, while Harris was working as an independent artist, and in an arts centre. As Harris told The Canary:

Myself and Alison became partners in 2010 at one of these performances in Derby and had a relationship through Skype until I moved in 2011. Initially Brother G and the Trouble was called World of Surprises. And we ran a market stall on Haynes Lane Market [in Crystal Palace] in 2011 to get in touch with the community. We didn’t make any money, though. It was more an existentialist experience in connections. And the name Brother G and the Trouble came from a need to get a stronger name for performing with.

While both individuals are artists, they work in different media. Harris has always had an interest in art, as O’Melia has had in photography and music. It’s these different talents which break the In The Dot Dot Dot/Have Mirror Will Travel exhibition into its two, unique areas. Harris is a painter. He says he got into technical drawing when he was at school. After leaving school, he applied to technical colleges, and also got a place on an art course. But he says he “lacked a certain confidence to carry it off”. So he decided to go into travel and tourism. But as he told The Canary, that didn’t quite work out:

It was a big mistake. But I ended up forming some bands and music groups with my brother. One of which gained some recognition in the late 1980s/1990s. I designed our posters and managed them without a mobile phone, pre-internet. But after that band split, I was drifting, and eventually moved to London. I came back to the art through and applied to do some courses which included photography. I then did a photography degree as a mature student in Derby. Gaining some ideas and strength in my work. I think time and age gave me more confidence to carry on with it.

Mixing art and our world

O’Melia’s main medium is music. She is a music therapist, performer and teacher by trade. But she does also work in a number art forms:

I use photography to visually record life and represent issues and questions about places and people. I play music to respond to visual images . Brother G and the Trouble is an integration of disciplines that moves between places, using visual and sound recording and performing to explore the present environment. As a musician and photographer I feel that both art forms can be used to establish communication, express, challenge, question and interpret the world.

And the In The Dot Dot Dot/Have Mirror Will Travel exhibition does indeed challenge and question the world. A potent mix of art and photography, its subject matter focuses on environmental, industrial and sociological issues, mainly relating to urban life. Harris’ work is created often with charcoal and pastel. But sometimes using household paints and acrylics. O’Melia’s Have Mirror Will Travel collection uses photography to focus on civil engineering and large projects that increase safety and enable communication, particularly in relation to waterways. Bridges, flood defences, weirs, canals and dams. It contemplates how they work and if they are robust and functional enough.

But it’s the human interactions with both the urban and natural world which come through prominently in the pair’s work. 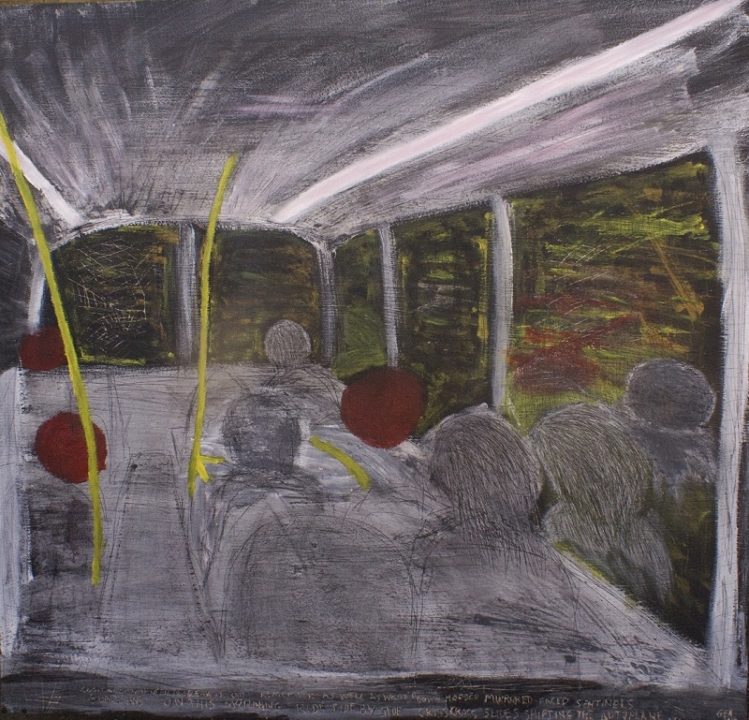 For the audience, the piece seems to serve to remind us that we’re all human. It can be so easy to forget, on public transport journeys, that every single person on that journey with you is also there with their own thoughts, feelings, hopes, and dreams. And they’re all sitting there, heads swimming around, just like you.

Harris said of the work:

It was a reflection on personal thought in everyone. We are getting so disconnected with the uses of technology and so this drives people away from connecting with others in that same experience.

He says the In The Dot Dot Dot collection is based on places, journeys and “current states” that stand out in his mind:

It’s the physicality of that experience. The time of creativity in those places. Failing and picking myself up. Moving to London. Failing in some ways but gaining in experience. Moving out. Going back to Cornwall. Studying and making friends as a mature student in Derbyshire. Getting back into the music there also. I think the physicality of painting needed to come out in my work. So memories hold strong as do friendships, relationships and creative bonds.

One of the standout pieces of O’Melia’s Have Mirror Will Travel collection is a black and white piece, shot next to the Thames barrier: 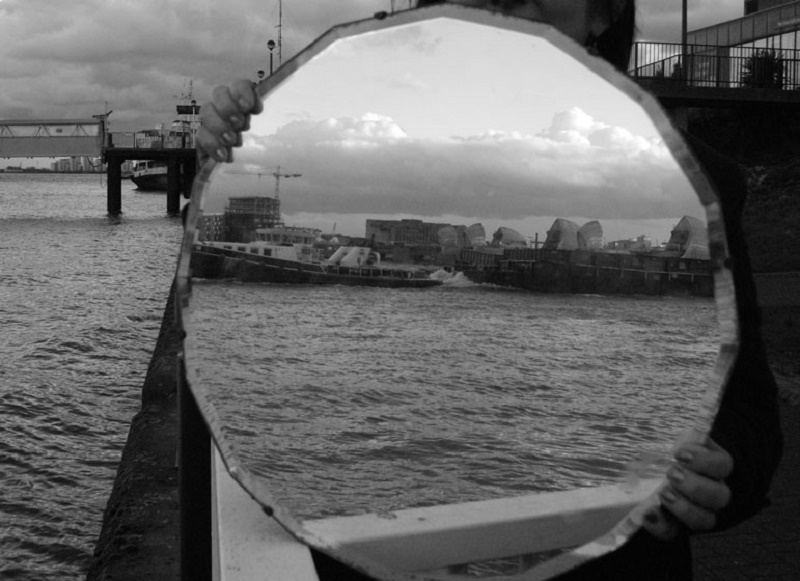 The theme of the collection is “reflection and protections”, and the above piece encapsulates this well. It is particularly striking as the water on the Thames looks menacing, almost sinister, in the exposure, which hammers home the “protection” aspect of the work. O’Melia says:

In the 21st Century the cities are precarious and the looming dark waters could represent the core threats to the well-being of individuals and communities due to the instability and unreliability within governments and the pressures of business interests versus the interests of society. Have Mirror Will Travel represents tensions between the human built environment and nature, a strong structure that protects the land and people from flood, being challenged by the currents and undercurrents of the river. It influences and manipulates the natural world. The natural world has both adapted and developed alongside the urban environment. But also been destroyed and polluted leaving long term impact on the ecosystems. Photography documents and expresses these processes from direct representation through to oblique interpretation.

Saying no to ‘Poor Doors’

But it’s the theme of sociological issues which stands out in the collective’s work. Especially compelling are the pieces the group uses to deal with social cleansing. The music/spoken word composition No Poor Doors was inspired by a Class War protest at 1, Commercial Street near Aldgate. But the piece traces the problem of social cleansing right back to 18th century garden designer Capability Brown:

Capability Brown… a sorcerer of garden, viewpoint and perspective, flooded villages to gain a good view for the landed gentry… Now, social housing in jeopardy. It seems the spirit of Capability lives on…

The piece features O’Melia on clarinet, Valentine on flute, Lisowska on violin, and Harris performing the spoken word. The group said:

[The issue of social cleansing is] so important right now. We have friends being affected by this directly on the Central Hill Estate. Housing in London is a big issue, where unaffordable flats are being built on land that was once an industrial unit. People are being moved out for flats that are left empty. Also the social divides are coming through in single buildings where you get doors for the less well off down a side street. Sickening Victorian attitudes are resurfacing. It makes us sick that communities are being broken up so as to provide for the richer clients in society.

It’s the importance of art as a means of social change, and of the work and its creator having a social conscience, which stands out in the In the Dot Dot Dot/Have Mirror Will Travel exhibition. You can feel a real connect between the artist and the audience; that they understand what challenges the rest of the working class are facing, and that they want to express this through their work. And these sentiments shine through. O’Melia told The Canary:

Art can promote social change. In the case of photography there is strong evidence of this in the documentary and photojournalism in the media. War photography, environmental photography, social photography. From Don McCullen’s portrayal of Vietnam to Nan Goldin’s LGBT-themed work to Wim Wenders photography of construction on the seafront. Many photos become considered as iconic images that capture a specific moment bringing the truth of a situation to the people and prompting response and change. The archives of photography since its inception inform us of the development of society and the environment, influencing future decisions and actions and enabling a greater understanding of the world at large.

In the Dot Dot Dot/Have Mirror Will Travel showcases conscious art at its best. Reflective while potent, and challenging yet moving, Harris and O’Melia have created an exhibition, a space, where the very nature of life in the 21st century, capitalist world can be ruminated upon. And as with all carefully considered art, the audience will leave with more questions than answers.

The In the Dot Dot Dot/Have Mirror Will Travel exhibition is hosting a special event on Saturday 21 January. Members of the public will have the chance to experience various performances, including spoken word and clarinet, along with the art exhibition itself. It’s being held at Fazenda UK, 13 Leyden Street, London, E1 7LE, from 4pm.

– Find out more about the In the Dot Dot Dot/Have Mirror Will Travel exhibition.